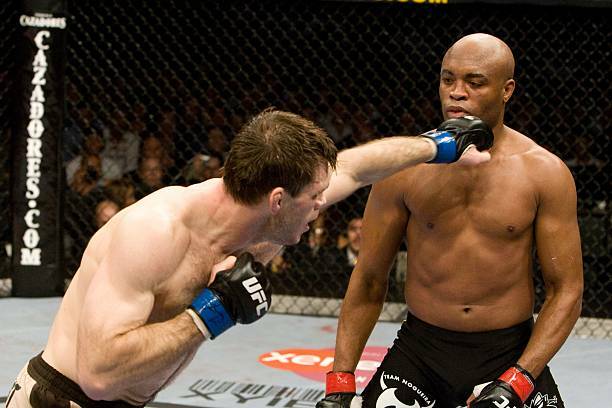 Defense in fighting is tough. Like really tough. That’s why almost all of the best fighters in MMA are offensive dynamos with respectable defensive capabilities. It takes time and a concentrated effort to have solid defensive skills. Defense has layers to it, and the very best are able to use those many layers to their benefit. Turning them into difficult to penetrate targets.

To understand it on a deeper level, you can view defense as having five different layers to it: distance management, footwork, head movement, deflections and blocking. The layers go in order of what is best for keeping you safe. These layers are fluid, and they can all be built up in a short period of time. For example, a single step by a fighter can cut through the distance management, and footwork routes, of an opponent. Forcing them to use the last three layers (head movement, deflections, and blocking) to protect themselves. Now onto an explanation of each layer.

The easiest way to not be hit is to not be in range in the first place. Obviously when you think of distance management there is the idea of keeping a long-range, so that no attacks can reach you. While this is not wrong–and that is generally the main application of distance management–the best fighters are able to manipulate distance in all ranges. A long hook coming at you can be nullified by stepping into the opponent, so that now you are completely out of the arc of the punch. This works the same with kicks. Simply keeping appropriate distance with strikes is more than enough to keep everyone safe, and it requires the least amount of work.

Phil Davis doesn’t have good defense. When strikes come at him, the layers addressed above are rarely seen, or not used appropriately. But there is one thing he does well, and it keeps his defensive stats very high. That thing is keeping his distance. He is always at an extremely far range when striking, and this allows him to take a step back whenever he sees a strike coming.

Those strikes will fail to reach him and he keeps himself safe. Conversely, whenever he gains confidence, or the fighter is throwing themselves off-balance, he can collapse that distance he set, and shoot for a takedown. The reason Davis is used as the fighter example is to show the effectiveness of having good distance management. Simply refusing to engage in a range where he can be hit allows him to stay safe. That is why distance management is the base for defense, as all fighters can do it. And even non-defensive fighters can keep themselves from getting out-struck.

As stated previously, these layers are fluid so they can blend together to form the same purpose. Good footwork can make distance management a whole lot easier. These include things such as pivots, side-steps, and just general angles created. A straight-line attack such as a front-kick can be completely neutralized just by stepping left or right. This step creates a defensive angle that can then be turned into an offensive one. Angles are generally used to describe offensive potential, but those same angles are a basis for defensive fundamentals. Strikes may not land because effective footwork can circumnavigate the attack.

There are a lot of fighters who be placed in association with footwork, but “Joanna Champion” (I’m sorry I’m not going to spell her last name again) is in a league of her own. She is able to glide around her opponents’ strikes and counter back brutally. Either in the pocket, or at range, “Joanna Champion” is able to keep strikes off of her, while being able to counter effectively. She moves in anticipation of whatever strikes are coming. After she is done striking there is always movement, to make sure that the opponent doesn’t have a clear shot at her in the brief spaces she’s vulnerable.

Head movement is the prettiest form of defense, no doubt. The uses for head movement are large, and it is a skill that most fighters need to have. Head movement is really hip movement. The hips fold in a direction and the head will follow course. Small folds of the hip can move the head greatly. Effective head movement can open large countering opportunities. The downsides to head movement are that it can be timed or brought out, to land hard shots on the person moving their head. Combining head movement with footwork and distance management makes an absolutely terrifying counter puncher.

There are about ten fighters I can think of in MMA who move their head at a high level. Anderson Silva was the first to show its value. If you need to see the importance of head movement, watch his bout against Forrest Griffin. It was a mauling. Also, it is responsible for the single best moment in MMA history. When Silva dodged Griffin’s punches and fired back with a counter left. The technique was beautiful to watch.

Deflections are for sweeping aside attacks. They seem like blocks, but they have the bonus of opening up the opponent to big countering opportunities. Parries, and certain kick defenses, use the momentum of the strike to place the attacker off-balance. This form of defense relies on you being directly in the line of fire, which can be a dangerous thing. It can be easy at times to misread a strike and be cracked with another one.

“Gamebred” uses parrying and other tactics well, but specifically his fight with Donald Cerrone was a deflection extravaganza. Whenever Cerrone would throw up a left high kick, Masvidal would sweep towards his left, throwing “Cowboy’s” weight across himself, and giving Masvidal time to land huge counters when Cerrone tried to recover his stance. This technique allowed him to finish Cerrone with strikes to the head.

When all else fails sometimes you just have to block. Blocking is using a part of your body to stop the opponent from hitting more important parts of your body. Checking kicks is a form of blocking. Since blocking is so common, there are many types of blocks for different situations.

Blocking can at times be a bad form of defense, as you are still taking the impact of the strike. It can plant you in place and allow more follow up shots, but effective blocking can open up countering opportunities. Also, blocking can give the aggressor a false sense of confidence, as it can seem purely defensive. This can allow clever fighters to bait strikes they want.

At first, Rafael Dos Anjos and Robbie Lawler as possible examples of this technique. But then I remembered Quinton “Rampage” Jackson. He has the best block counters I’ve seen in MMA. His blocking was very flexible (except if it had anything to do with low kicks) and he always had a counter he would rattle off. One of his favorite types of counters was the catch and pitch counter. That is one where you take a strike on one side of your body, and immediately fire off a counter from the same side. His knockouts of Chuck Liddell and Wanderlei Silva are perfect examples of this.

We have discussed all the five major layers of defense. It is important to note that defense shouldn’t be used just on its own. It’s a fight. There must be damage given to win the fight, so defense should be used to set up offense. That is why we talked about countering so much. Hopefully you have a greater understanding of defensive fundamentals, and maybe when you see fights you can pick up on the layers used.