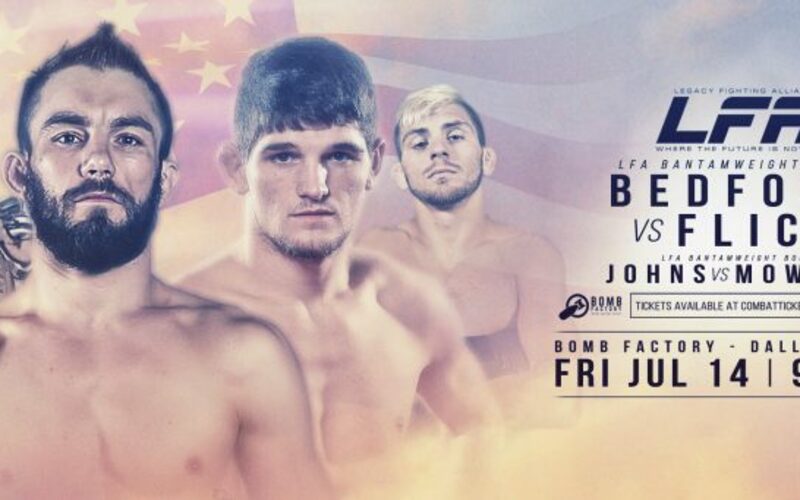 Legacy Fighting Alliance (LFA) has had a busy summer. In last month’s newsletter, it was reported that LFA alum accumulated $200,000 in UFC bonus money in the month of June, former RFA headliner Zach Freeman secured an “Upset of the Year”  nominee in New York City, and three inaugural LFA titles were awarded to get the summer started.

The Summer of LFA

LFA LAUNCHING PAD
The summer continued to heat up in July. The UFC hosted 5 events along with the first 3 episodes of UFC President Dana White’s new weekly web series titled “Dana White’s Tuesday Night Contender Series” throughout the month.
The number of LFA alum that participated in those events was staggering. 19 fighters that have fought for LFA or the two promotions that merged to create it (RFA and Legacy FC) competed in the UFC. UFC 213 headliner Valentina Shevchenko would have made that 20 fighters, but Amanda Nunes withdrew from their title fight on the day of the fight.
The presence of LFA alum on Dana White’s new show was just as impressive. In the first three episodes that aired in July, 17 of the 30 competitors (56.6%) had previously competed for LFA, RFA, or Legacy FC.  Each of the three episodes also featured two “LFA vs. LFA” matches. The most impressive stat, however, is the fact that an LFA fighter was signed by Dana White off of each episode.
That trend carried over into August with a fourth LFA fighter being signed to the UFC off of the fourth episode of “Dana White’s Tuesday Night Contender Series”. The four LFA stars signed off of the show so far are Boston Salmon (Week 1), Sean O’Malley (Week 2), Geoff Neal (Week 3), and Julian Marquez (Week 4). There are currently 32 fighters from LFA scheduled to compete on the Tuesday might summer series. LFA also currently has 19 alum ranked in the latest UFC fighter rankings.
LFA ALUM IMPRESS IN THE UFC
While former LFA fighters impressed in the UFC last month with the sheer number of participants, what they accomplished in those bouts is even more important. Perhaps the biggest shining star of the bunch was former RFA featherweight champion Brian Ortega. The man known as “T-City” improved his perfect record to 12-0 and saw his UFC fighter ranking move up to #6 in the world.
Ortega did this by breaking his own UFC record at UFC 214 on July 29th. Going into his bout with fellow unbeaten star Renato Moicano, Ortega held the UFC record for most consecutive third round finishes. He extended that streak by submitting Moicano in the final frame with a $50,000 UFC “Performance of the Night” bonus winning Guillotine Choke.
The following Saturday at UFC Fight Night 114, RFA great Dustin Ortiz broke another UFC record to secure his own $50,000 UFC “Performance of the Night” bonus. Ortiz accomplished this feat by knocking out Hector Sandoval in 15-seconds to record the fastest finish in UFC flyweight history. His teammate and former RFA flyweight champion Sergio Pettis happened to headline the same card. Pettis won his marquee bout against Brandon Moreno unanimously in a pivotal battle between two Top 10 ranked UFC flyweights.
The UFC will be off for the next few weeks, but September looks to be just as big for the LFA greats competing inside the famed UFC Octagon. UFC 215 on September 9th will feature two LFA alum challenging for UFC world titles. Legacy FC great Ray Borg will headline the card for a shot at the UFC flyweight title, while Shevchenko will finally get a crack at the UFC women’s bantamweight title in the co-main event. Seven other LFA alum have UFC bouts already announced for next month as well.
4 SHOWS IN 4 WEEKS
LFA started August with the first title defense in the promotion’s history. Two of the inaugural LFA champions that were just crowned in June (Eryk Anders and Roberto Sanchez) have already made their UFC debut, but LFA featherweight champion Kevin “Angel of Death” Aguilar was able to defend his title in the main event of LFA 18 this past Friday. He did so by sweeping the scorecards against a very game challenger in #1 contender and world-class BJJ black belt Justin Rader.
LFA is now set to end the summer with four shows in four weeks in four different states. The quadruple-header starts next week in South Dakota at LFA 19. The promotion then heads east to Minnesota the following week at LFA 20. LFA kicks off first day of September in Missouri at LFA 21. Then the final leg of the four week trip will go down in Colorado at LFA 22.
LFA 19 – Michaud vs. Rodrigues takes place Friday, August 18th at the Sanford Pentagon in Sioux Falls, South Dakota. The event will serve as the second LFA event to take place in the state of South Dakota. RFA visited “The Mount Rushmore State” four times before the merger. LFA 19 is headlined with a welterweight war between three-time UFC vet David “Bulldawg” Michaud (11-3) and Brazilian powerhouse Ciro “Bad Boy” Rodrigues (20-7).