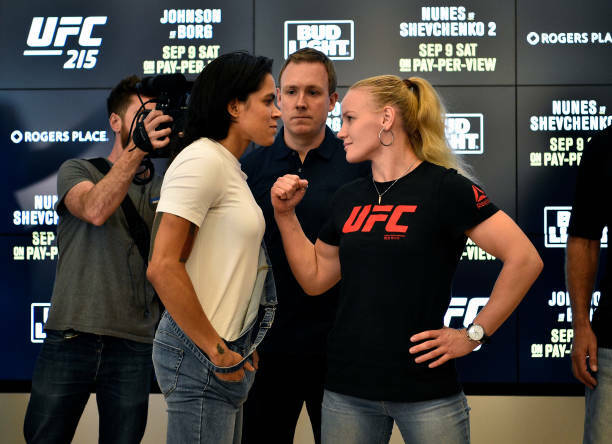 Well, despite a big last minute hit to the card; UFC 215 is finally here.

Demetrious Johnson will no longer be looking to make history on Saturday night after his opponent, Ray Borg, pulled out of the bout last minute due to an apparent illness.

Instead, the co-main event has been promoted to the main event billing, and it’s still a very intriguing title fight. Amanda Nunes will look to defend her women’s bantamweight title when she takes on Valentina Shevchenko in a rematch of their 2016 meeting.

The fight becomes intriguing when you bring attention to the fact that; Nunes won the early parts of that fight, but down the stretch, Shevchenko began to take over. It’s made even more interesting when you take into consideration the factor of their fight being five rounds this time.

Nunes won the first meeting by a thin margin, but she has never seen the fifth round before, and her two UFC title fights both ended with her getting a finish inside the first round. However, Shevchenko very recently went five rounds with former champion Holly Holm and looked fantastic while doing it.

The two were set to do battle for a second time at UFC 213 in July, but in a situation eerily similar to what we’re dealing with this weekend; Nunes pulled out of the contest last minute and the fight was scrapped. The two were set to headline the event before the co-main event was bumped up after the initial cancellation.

It looks as though the fight is a go this time, though. So let’s see who can get the job done when they come face-to-face yet again at Rogers Place in Edmonton, Alberta, Canada.

The prelims feature names like Sara McMann and Adriano Martins as well as stellar Canadian talent in the form of Gavin Tucker, Mitch Clarke, Arjan Bhullar, and Kajan Johnson.

For the first time ever, watch a UFC event on the fantastic FITE TV streaming service… right here on MMA Sucka! Also; check out the full card, which will be updated with live results, below.