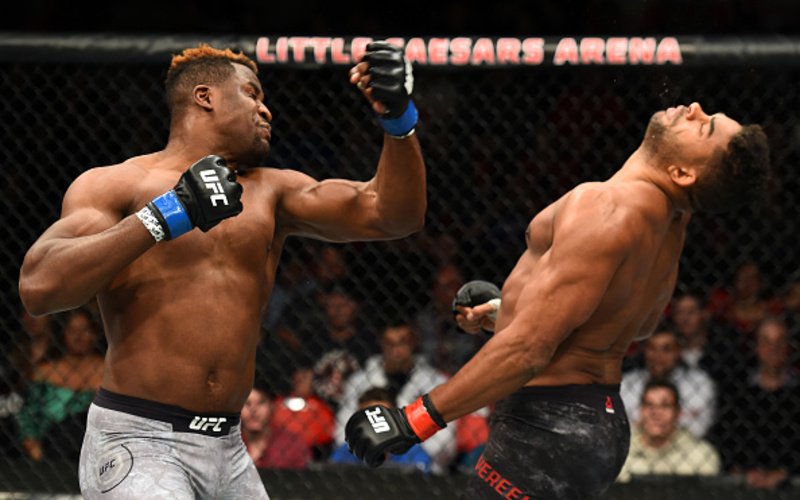 UFC 218 delivered in full force this past weekend, to the point of being nearly overwhelming with the amount of action-packed fights and finishes. Most bouts on the card had severe title implications, as one would expect from any good pay-per-view. On a card full of crucial victories, who had the most impressive and important?

No brainer. He did the damn thing. Holloway successfully defended his featherweight title for the first time at UFC 218 against Jose Aldo, the man he took the belt from. Aldo was and is still seen as the consensus featherweight GOAT, and Holloway now has two wins over him. The Hawaiian champion likely closed the book on the Aldo chapter of his reign. Now, he’s ready to move on to fresh matchups. Who’s next? Perhaps Frankie Edgar, who he was originally supposed to meet in Detroit. Or maybe the winner of Cub Swanson vs. Brian Ortega. Either way, Holloway’s answer will likely be the same: “it is what it is.”

N’Gannou landed what will likely be the knockout of the year against No. 1-ranked heavyweight Alistair Overeem. That alone is enough to land him on this list. However, Dana White also confirmed N’Gannou has earned a title shot against heavyweight champion Stipe Miocic. The heavyweight contender landed a vicious uppercut that sent Overeem to sleep before he hit the ground, which surely made many MMA fans’ jaws drop. If Miocic vs. N’Gannou does go down, it’ll likely be the most anticipated heavyweight title fight in a long time.

Alvarez won FOTN honors for his war with Justin Gaethje. “The Underground King” also handed Gaethje his first professional loss, knocking him out with a brutal knee. The fight also officially closed out Season 26 of The Ultimate Fighter, of which Alvarez and Gaethje coached. With the win and an extra $50,000 in his pocket, Alvarez may be one win away from a title fight. A rematch with Dustin Poirier makes perfect sense, and could be a title eliminator. The two fought to a no contest in May that ended with illegal knees by Alvarez.

Torres got the fight she wanted and made good on it with a unanimous decision win over Michelle Waterson. It was easily the biggest win of the “Tiny Tornado”‘s career. That’s not just in terms of who she beat but where she beat her; the fight kicked off the UFC 218 main card. Torres may have punched her ticket to a rubber-match with new strawweight champion Rose Namajunas.

Medeiros was part of the other UFC 218 FOTN recipient. Not only is the $50,000 a lot of money for a fighter still climbing the rankings, but Medeiros almost certainly punched his ticket into the top-15 of the welterweight division. He defeated No. 15-ranked 170er Alex Oliveira in a back-and-forth violence-fest. Each fighter landed two knockdowns and over 75 significant strikes. Medeiros has likely secured himself a top-15 fighter after his third-round TKO and Fight of the Year candidate.