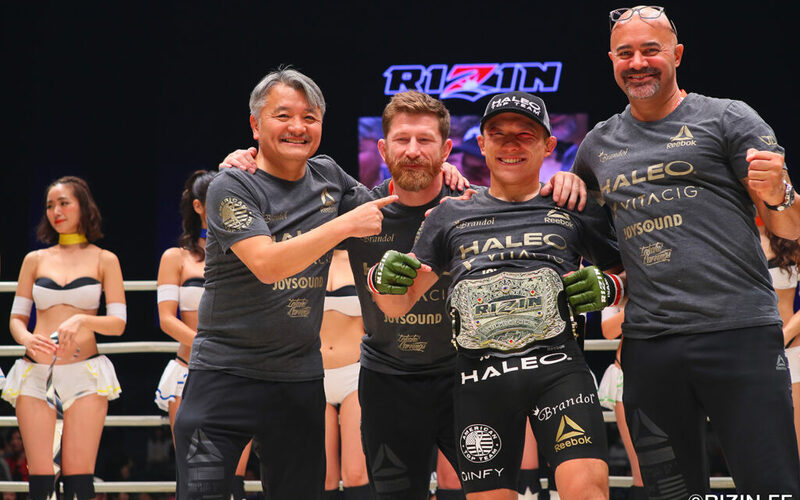 RIZIN closes out the year with arguably the best MMA event of 2017.

Their typical double-header featured incredible action, with three separate one-night tournaments taking place on the final night of the year.

Here is a breakdown of all the tournament action for those who didn’t have the pleasure of watching!

Kyoji Horiguchi is almost unanimously considered to be the #2 flyweight in the world, only behind Demetrious “Mighty Mouse” Johnson. Yet as he moved up a division to join a stacked bantamweight grand-prix, Horiguchi was still considered the favorite to win it all from the start.

In the finals, he took on former foe; Shintaro Ishiwatari. But, before we get into that, let’s rewind a little bit and talk about how both men made it to the tournament finals.

Horiguchi faced Japanese legend Hideo Tokoro in the first round of the tournament. Going into the fight, many were expecting a war. But that is not what we got. Instead what we saw was Kyoji Horiguchi take out Tokoro in under two minutes.

Horiguchi picked up another KO win against the 10-0 Brazilian, earning himself a spot in the semi-finals last night.

Last night the semi-finals and finals of the tournament took place. In Horiguchi’s semi-final bout, the Japanese fighter took on RIZIN’s brash bad boy; Manel Kape following a controversial TKO win in the quarter-finals vs. Ian McCall for the Angolan trash-talker.

Horiguchi was unsurprisingly unfazed by Kape’s trash talk and, despite being visibly wobbled badly after a clash of heads, Horiguchi outstruck the Angolan and took him to the mat late before winning the fight by submission.

Horiguchi expressed his “disappointment” post-fight that he ended the fight by submission and not knockout, promising a KO in the final.

As we mentioned above, Horiguchi faced Shintaro Ishiwatari in the finals later on in the night. But before we get to that fight, let’s recap Ishiwatari’s road to the finals.

In the first round of the grand-prix, Ishiwatari outworked Fight Night Global’s Akhmed Musakaev in October. Solidifying his spot in the quarter-finals on December 29.

Shintaro Ishiwatari would face “Machine Gun” Kevin Petshi in the semi-finals of the tournament. Entering the contest, the King of Pancrase expressed disappointment in his showing vs. Musakaev.

Ishiwatari dominated Petshi early with his fantastic ground game, but the fight ended on the feet late in round one when a perfectly timed counter-hook put Petshi to sleep, sending him face-first into the canvas.

Two days later in the semi-finals of the tournament, it was champion vs. champion when Ishiwatari and his Pancrase Championship entered the ring with Takafumi Otsuka and his DEEP Championship.

Otsuka entered the contest having mounted a comeback finish against undefeated German; Khalid Taha on December 29, and he came into the semi-finals more motivated than ever. As Ishiwatari was the last man to defeat him exactly three years to the date of this semi-final rematch.

In a fantastic three-round battle, Ishiwatari outworked Otsuka and picked up a unanimous decision nod from the judges.

Now; the finals were set.

This bout was a rematch of a 2013 VTJ war between the two that saw Horiguchi defeat Ishiwatari via TKO in the fifth and final round of the fight.

Entering the contest, Ishiwatari was all business as he finally had the chance to avenge that loss years ago.

Early in the first round, Horiguchi brought the fight to the mat and immediately started to do work. Landing big shots on Ishiwatari and having him visibly hurt. Towards the end of the round, the fight made it’s way back to the feet where a rocked Ishiwatari became the aggressor and started to throw bombs at Horiguchi like a madman.

The round ended and the two were given 60-seconds to rest before the start of round two.

Fifteen seconds into the round, Horiguchi caught an aggressive Ishiwatari right on the chin for the knockout winning his third fight in the span of two years and ending 2017 with a perfect 5-0 record.

Kyoi Horiguchi closes out the year with a belt around his waist as the #2 flyweight in the world dominates a field full of high-level bantamweights. He wins his eighth-straight fight, fifth-straight since joining RIZIN.

Shintaro Ishiwatari had his seven-fight win streak snapped by Horiguchi. Despite the finals loss, however, Ishiwatari comes out of this tournament looking like a million bucks considering the performances he put on prior.

What a great tournament that spanned the latter half of 2017, and congratulations to Kyoji Horiguchi for showing the world that, regardless of weight class, he is not one to doubt.

Entering the super atomweight grand-prix, the tournament favorite was RENA by quite a large margin. This, of course, was not much of a surprise given how big of a deal she is in Japan.

20-year-old phenom Kanna Asakura was the darkhorse in the grand-prix from the start, and a lot of people were hoping for a RENA vs. Asakura final specifically for the stylistic match-up. But both women had plenty of work to do before that fight came to fruition.

It wasn’t an easy road for either, but both of the outstanding performers found their way into the grand-prix finals. Let’s review the road each had to get there. Starting with the tournament quarter-finals in October.

In what was a very obvious style vs. style match-up, Kanna Asakura absolutely dominated the Polish striker to earn a hard-fought-unanimous decision win.

She then headed to the tournament semi-finals last night where she took on a fighter whom many were dubbing “the female Anderson Silva“ in the form of Maria Oliveira.

In yet another grappler vs. striker match-up for both women, the two had a fairly competitive opening round. At the start of round two, however, Asakura used her fantastic wrestling ability to bring Oliveira to the mat.

When there, she was able to thoroughly dominate the Brazilian in every position and was eventually able to synch in an armbar from the mount position, forcing Oliveira to tap.

This punched the 20-year-old’s ticket to the grand-prix finals. We’ve already established that her opponent would be RENA. But let’s see how RENA earned that finals slot as well!

In October she had a highly-anticipated grand-prix quarter-final match with former KOTC title-holder; Angy Nguyen.

It wasn’t much of a fight, however. As just three minutes into the fight, Nguyen crumpled at the hands (literally) of RENA and her nasty body shots.

The impressive KO win placed her in the semi-finals where she faced a very tricky fighter in Spain’s Irene Rivera.

Rivera is a very long fighter in terms of reach and is tricky on the feet and especially the ground due to that. So the fight was an interesting one to look at on-paper, but much like RENA’s quarter-final, it was not much of a fight.

Early on, Rivera attempted to jump guard, but RENA was able to stay upright and keep the fight on the feet. While there, Rivera was stunned by the punches of RENA. And as RENA began to flurry, she sent Rivera reeling to the canvas.

Luckily for Rivera, right as the referee stepped in RENA whiffed on what could have been an absolutely brutal soccer-kick.

After some back-and-forth on the feet, Asakura got one of her patented takedowns and managed to absolutely work RENA from there. The young wrestler took the back of the shoot boxing champ and sunk in a very tight rear-naked choke. Before RENA had the chance to tap, she was promptly put to sleep.

Kanna Asakura closes out the year with a perfect 6-0 record, a championship win, and caps it all off with the biggest win of her very, very young career.

RENA was tested for the first time in her MMA career and, as a result, received the first blemish on an otherwise perfect record.

Congratulations to Kanna Asakura on achieving something so big this early in her career. It will be very interesting to see where RENA goes from here.

In a tournament that was literally created for Tenshin to shine, that is exactly what he did. It was a very experienced 19-year-old phenom vs. a field of mostly unexperienced kickboxers, and it showed.

Tenshin Nasukawa kicked off the semi-finals with a flying-knee KO vs. Yuta Hamamoto, placing him in the tournament finals against former MMA opponent Yamato Fujita after Fujita picked up a brutal KO over veteran MMA fighter Mitsuhisa Sunabe in the semi-finals.

Before meeting in the tournament finals, Yamato went the distance with Tenshin in an MMA fight just two months ago.

So, even though Yamato had just made his kickboxing debut vs. Sunabe and only possessed a record of 1-0 in the sport compared to Tenshin’s phenomenal record, the two did have experience with each other.

It was no help, however, because Tenshin absolute steamrolled him. Knocking him down three times for the TKO in just 85-seconds.