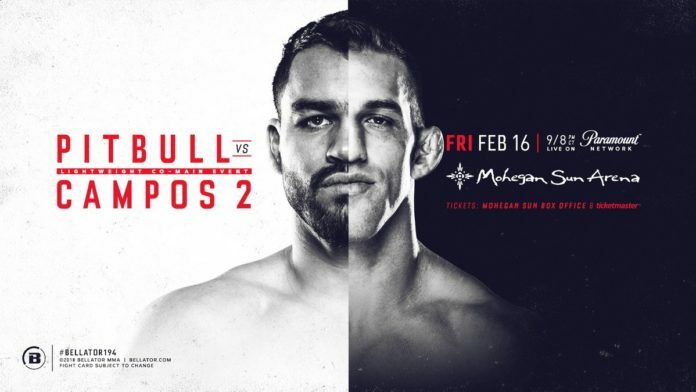 Ater three failed attempts to book the rematch in the last couple years, Patricky Pitbull and Derek Campos are scheduled to meet once again at Bellator 194.

The lightweight rematch was announced by Bellator MMA on Friday.

Bellator MMA mainstay, Patricky “Pitbull” Freire (18-8) enters the contest having won two of the biggest fights of his career. In his last outing, he outpointed former UFC & WEC lightweight title-holder Benson Henderson at Bellator 183 in September of 2017.

Prior to this, he rebounded from a rough KO loss against Michael Chandler by knocking out former Strikeforce champion Josh Thomson in his backyard of San Jose, California. In the first bout with Derek Campos back in 2014 at Bellator 117, Patricky Pitbull scored a second-round knockout in what was a lightweight tournament semi-final matchup.

My next fight is set and it’s gonna be fireworks.

Derek Campos is on a 4 fights win streak against respectable opponents and I know he’s eager to get his revenge, so I’m sure he’ll bring his best version yet.

But I’m a man on a mission, so you better get ready for a lot of ??

Another mainstay of Bellator MMA’s fantastic lightweight division, Derek Campos (19-6) enters the contest riding his best run since 2014. He was the winner of his last four bouts, with two of those wins coming by way of (T)KO.

He started off the streak in early 2016, knocking out UFC-veteran Melvin Guillard in just 32-seconds. He then went on to beat Djamil Chan later that year and returned in 2017 with two Fight of the Year contenders against Derek Anderson and Brandon Girtz. With the latter bout against Girtz being a trilogy fight that headlined the Bellator 181 card in July.

Bellator 194 takes place on February 16 at the Mohegan Sun Arena in Uncasville, Connecticut.

More bouts will be announced in the coming days.