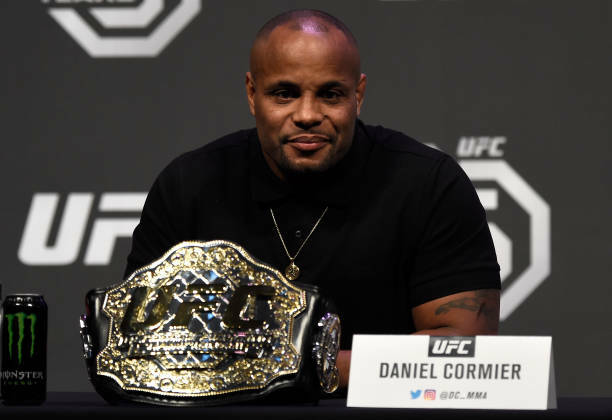 UFC 220 will go down in the MMA history as the night Stipe Miocic and Daniel Cormier went from respected champions in their time, to all-time greats in their divisions. Yet a new opportunity lays before both men. The opportunity to be considered one of the greatest MMA fighters to have ever lived. And with the announcement that the pair will face off on July 7 at UFC 226, a legend making moment waits.

Barely an hour after the crowds left the TD Garden arena last weekend, Dana White already had a big money super-fight in his sights: Miocic versus Cormier. While talking up a possible bout during a post-event interview on Fox Sports 1, the UFC president made note of the 205-pound champions previous history in the heavyweight division. He then would follow the point by saying, “Stipe just broke the record for most defenses, so it’s a fun fight…I think that’s a fight people would like to see.” Little did we know that the fight was soon to be announced, along with plans for the combatants to coach the next season of the The Ultimate Fighter as well.

Cormier versus Miocic is the super-fight we deserved

While the term “super-fight” is thrown around at nauseating levels nowadays, this fight is the epitome of the concept. The last time the sport saw a bonafide super-fight was when Georges St-Pierre faced BJ Penn for the former’s welterweight strap in 2009. Both were listed in the top three of most pound-for-pound lists (along with Anderson Silva) at the time, and both were well-established stars in the industry. Now Miocic and Cormier are not in the top three of key pound-for-pound lists currently, however, they are close. Cormier currently sits at #4, and Miocic at #6, on the UFC’s official list. On the MMAJunke/USA Today rankings Cormier sits at #3 and Miocic at #4, and on ESPN’s list Cormier resides at #7 and Miocic ahead of him at #6, respectively.

Miocic/Cormier and St-Pierre/Penn bare other similarities aside from the fighter’s high rankings. These fighters are, or were, in adjacent weight-classes, so the matchmaking is quite reasonable. Another similarity is Penn, like Cormier, had success in the division they were moving up to for these fight. Penn defeated welterweight legend Matt Hughes to earn his first ever UFC championship in 2004. Yet, 155-pounds was always his optimal weight-class. Once the division was created, he would dominate it as its champion from 2008 to 2010. As for Cormier, he actually established himself in the sport as a heavyweight going 13-0, and winning the Strikeforce heavyweight grand prix. So this isn’t like Conor McGregor (to lightweight) and St-Pierre (to middleweight) making moves to divisions they never competed in before.

The upcoming bout makes a lot of sense for the two fighters. As Cormier has defended the light heavyweight title on four occasions, and Miocic just broke the record for defenses at heavyweight. But what about their own divisions, is there not a clear contender deserving of a title?

While the term “super-fight” is thrown around at nauseating levels nowadays, this fight is the epitome of the concept

A case could be made for Alexander Gustafsson getting a title opportunity against Cormier. And it is an interesting notion, considering the two men had an underrated classic back in 2015. Gustafsson has one back-to-back fights, which at least puts him in the conversation for contention. However, “Gus” announced on Instagram late last year that he had shoulder surgery. No clear timetable for a return was mentioned, so his ability to fight in the coming months was a big question mark. After Gustafsson, the only other fighter that is in contention is Ovince Saint Preux and his three-fight winning streak. Unfortunately, wins over the likes of Yushin Okami and Marcos Rogerio De Lima isn’t  enough to leapfrog into a title shot. 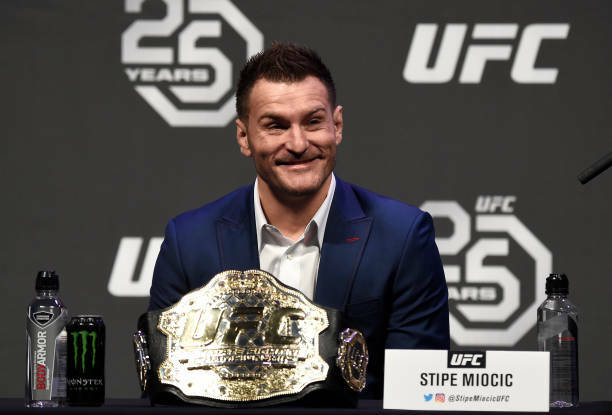 The situation for Miocic at heavyweight is similar. Fabricio Werdum is the only top-five fighter that may have a claim to a title shot after going 3-1 since his loss to the champ in 2016. Though, two points hurt “Vai Cavalo’s” case for a championship rematch. Firstly, he had his clock cleaned by the Cleveland fire fighter within the first three minutes of their bout. Second, his recent two fight winning streak came against prospects Walt Harris and Marcin Tybura. Like Saint Preux, the lack of strong competition is hindering Werdum’s stance as a legitimate contender.

With their divisions looking to be sufficiently cleaned out, the path was clear for UFC brass to make the bout. But wanting the fight, and getting the two fighters to except the match-up was far from a given. Cormier would be taking on a very large and talented fighter, a legit threat to anyone’s health. While Miocic would risk hurting his legacy if he lost to a smaller man that he “should” beat.

Without a doubt this is a win-win situation for Cormier. He would undoubtedly be the underdog, coming in as the smaller and older fighter. But even at light heavyweight Cormier is usually the smaller and older fighter. Granted, when he last fought at heavyweight he was a more spry fellow. However, the leaps he has made in skill and fight IQ since his last heavyweight scrap against Roy Nelson in 2013 are considerable. Today’s Cormier would maul his younger self. And his 1.0 version faced off with Antonio Silva, Josh Barnett and Frank Mir (all men that hover near the 265-pound limit) and never lost around. Cormier would be as live an underdog as there has even been in a fight of this magnitude.

The risk is worth the reward for Cormier, but is so for Miocic? Yes, it is. While he would be the obvious favorite because of the size advantages he has, this would not be an opponent sailing in uncharted waters. He is facing an undefeated heavyweight, who has won a title in another division, and is ranked higher than him in most pound-for-pound lists. Like Penn/St-Pierre and St-Pierre/Bisping, this is a highly qualified contender who poses legitimate threats in terms of speed and experience. The debate is already in-progress on Miocic being the best heavyweight fighter of all-time. He already has an impressive resume and a record three title defenses, however a win over a no doubt hall-of-fame fighter will move Miocic into the conversation as the best ever…period. That seems worth the risk to me.

Without a doubt this is a win-win situation for Cormier

What makes this latest super-fight special is that it has presented itself organically. The two champions have cleaned out their divisions to the point where moving up or down for the next great challenge makes sense. It is the opposite of how these fights have occurred in the WME-IMG era of UFC.

In the film Inglorious Bastards, the antagonist Colonel Hans Landa tries to broker a surprise deal with his rival by saying, “In the pages of history, every once in a while, fate reaches out and extends its hand.” Well fate knocked on the door, and these two great champions were smart enough to answer. It is the super-fight fans and pundits truly wanted and deserved. Get your popcorn ready and grab whatever lucky item you have to ward off the MMA injury bug, it’s going to be an amazing moment in the sports history on July 7.