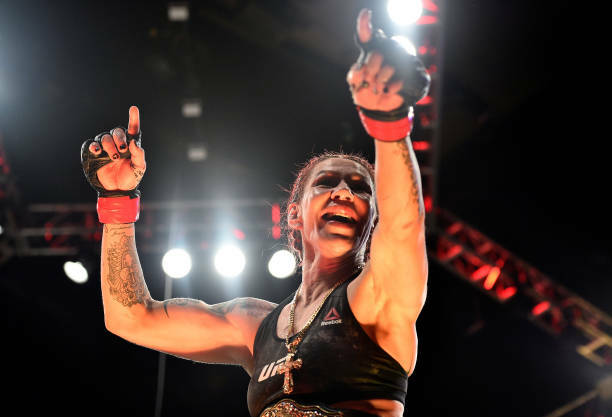 A UFC women’s Featherweight title bout between Cris “Cyborg” Justino and Invicta FC Bantamweight champion Yana Kunitskaya is rumoured to be set to headline UFC 222, per Ariel Helwani. Cyborg vs. Kunitskaya would without a doubt be an upgrade to an already struggling UFC 222 card, and this news came out of nowhere for many, who were beginning to speculate an interim title bout may be necessary to save the PPV status of the card.

There are deals in place to have Cris Cyborg vs. Yana Kunitskaya for the women’s 145 belt headline UFC 222 on 3/3 w/ Frankie Edgar vs. Brian Ortega as the co-main, per multiple sources. Not 100% finalized but that’s the current direction and it’s looking promising at the moment.

Cyborg vs. Kunitskaya, Edgar vs. Ortega rumoured to headline UFC 222

The card took a massive blow when champion Max “Blessed” Holloway was forced to pull out of his fight with top contender and all-time great Frankie “The Answer” Edgar.

Helwani is reporting that Edgar is now scheduled to face surging contender Brian “T-City” Ortega in the co-main event slot. Ortega is coming off of a brilliant guillotine submission win over perennial featherweight player Cub Swanson.

Edgar vs Ortega is all but done. The question now is whether it’s the main event or not. If UFC can’t find a title fight to headline 3/3 (and thus far no luck), there’s a good chance they’ll turn the PPV into a Fight Night and have Edgar-Ortega be a 5-rounder. (Cont’d)

Without these promising fights, UFC 222 may not be able to move forward with the main event of heavyweight gatekeepers Andrei Arlovski vs. Stefan Struve.