In terms of “variety”, February 2018 wasn’t the best month when it comes to submission finishes.

Chokes and arm-based submissions dominated the month. Last month, MMASucka’s January 2018 Submission of the Month was a very rare one. Abdul-Rakhman Makhazhiev picked up a big win over former BAMMA title-holder Damien Lapilus by way of the very rare calf-slicer under the ACB banner.

On to February 2018, however. No crazy calf-slicers. In fact, this month’s Submission of the Month winner is a fairly common triangle choke. But this one is special.

On February 10 an event took place over in Kelapa Gading, Jakarta Utara, Indonesia – it is here where we saw the best submission of February 2018. 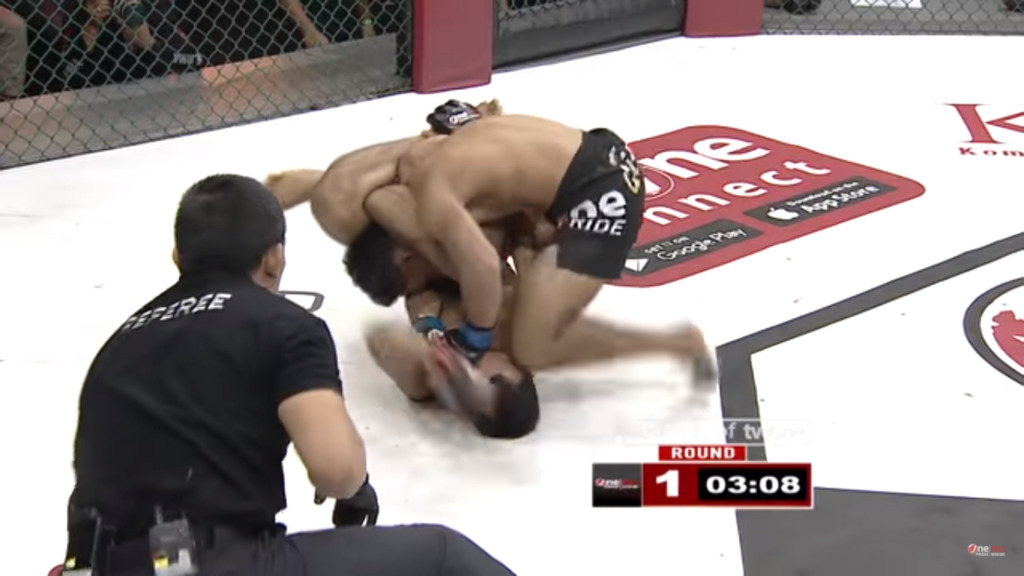 Live from the Britama Arena Mahaka Square in Indonesia was a 20-fight card under the One Pride MMA banner.

One Pride MMA 16 featured a flyweight bout between Iwan Hermawan and Adi Rominto.

Very early on in the contest, Hermawan was on the receiving end of a takedown. The local fighter immediately began to work towards locking in a triangle. Rominto was aware of this, and he immediately overpowered Hermawan, lifting him for a powerbomb without much trouble.

Rominto slammed Hermawan to the canvas once at full force and immediately lifted him for another slam. He very quickly got him up again and slammed him once more, but Hermawan held on. Rominto went for yet another powerbomb, this time carrying Hermawan in the position for about five-seconds before attempting to drive him through the floor.

The third slam was so powerful that Rominto front flipped upon landing, giving Hermawan top position for a split second before Rominto swept and got back top control – thus landing yet another powerbomb.

Keep in mind, that is four slams all the span of under one minute. All of this while Hermawan is working towards and eventually locks in a triangle choke on the powerhouse Rominto.

On the fourth slam, Rominto realizes he’s going to need something more. So he shifts his legs to the side and manages to fire off some grounded knees to the head of Hermawan as the triangle begins to get tighter. In one last effort to loosen the hold, Rominto fires off six sharp grounded-knees to the temple of Hermawan, with all shots landing flush.

Hermawan – incredibly – survived all of this and managed to finally force the tap 2:22 into round one. Talk about a well-deserved and hard-fought win!

There are plenty of honorable mentions, so check out some other great submissions that happened this month!