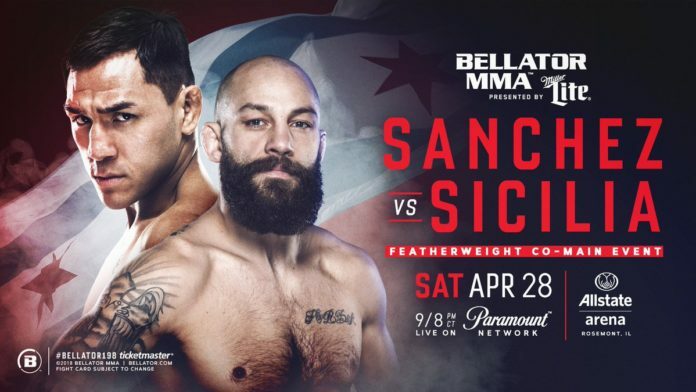 An intriguing featherweight clash has been announced as the co-main event of Bellator 198 in April. Emmanuel Sanchez returns to the cage to take on UFC, TUF veteran Sam Sicilia.

Emmanuel “El Matador” Sanchez (16-3) enters the match-up following the biggest win of his career at Bellator 184 in October. In the aforementioned win, Sanchez defeated former featherweight titleholder Daniel Straus via third-round submission. Prior to this, he picked up unanimous decision wins over former bantamweight champion Marcos Galvao and former WSOF champion Georgi Karakhanyan.

Many people thought a title shot would be next for Sanchez, but that is not the case. Instead, UFC and TUF veteran Sam Sicilia has been given the opportunity to potentially steal some of that shine.

Sam Sicilia (15-8) enters the contest after starting off his Bellator MMA career with a win back in December. After losing three-straight in the UFC, Sicilia signed with Bellator MMA and picked up a huge upset win over former bantamweight king Marcos Galvao. The Sikjitsu fighter could find himself inserted directly into the featherweight title picture with a win over Sanchez.

Bellator 198 is scheduled to take place on April 28 live from the Allstate Arena in Rosemont, Illinois.

The main event will feature the very highly-anticipated heavyweight grand-prix quarter-final between Fedor Emelianenko and Frank Mir. Also on the card will be the return of Neiman Gracie as he takes on Javier Torres in a welterweight match-up.

With only three bouts officially announced, expect more news in the coming days and weeks.