This weekend was one of those unheralded Bellator cards that make you reassess what the promotion is trying to be. Are they purveyor’s of elite, but largely anonymous talents, or the home of UFC has-beens who stick around as long as they bring in eyeballs? The truth, as ever, is somewhere in between. However Bantamweight champion Darrion Caldwell turned some heads this weekend.

Coming to you live from, yes you guessed it, Thackerville – the mundane on-paper fight card was headlined by a bantamweight world title tilt between champion Darrion Caldwell and Pitbull bros. protégé Leandro Higo. And while Bellator undercards are often treacherous affairs, it was the evening’s final fight that made the whole endeavour worthwhile.

Lasting just 2:36, it wasn’t a slobberknocker by any means – in fact, other than the finish there was nothing remotely interesting about the contest – but it was that oh-so-easy dismantling of a tough challenger by a champion brimming with potential that made this writer sit up and pay attention. Caldwell saw the opening early on and rapidly dispatched Higo with a guillotine choke – easy as that.

Caldwell has all the makings of a future Bellator star. A homegrown fighter, he has been with the promotion since 2014, making 10 of his 13 walks to the cage under the Bellator banner. This, as we’ve seen with Michael Chandler, is marketable. Bellator cannot continue to swallow up the UFC’s turds and present them as diamonds, to secure longevity the company must produce their own stars – Caldwell could be that guy.

‘The Wolf’ has the skills, we saw that in the way he outpointed previous incumbent Eduardo Dantas in October and how easily he secured the guillotine against Higo last night, and he showed after the fight that he has the compelling personality to match. After running down his competition in the bantamweight division, he got in to a war of words with the aforementioned Pitbull brothers. That’s the sort of thing that will attract attention to one of Bellator’s most underrated weightclasses.

Caldwell, Higo, Dantas, Joe Taimanglo (who has split wins and losses with ‘The Wolf’), Joe Warren and Michael McDonald – the division is brimming with talent right now. Taimanglo defeated Warren last night in the co-main event, potentially setting himself up for a trilogy bout with Caldwell, this time with the belt on the line. Caldwell dismissed the idea in his post-fight interview, claiming that ‘Baby Joe’ wouldn’t stand a chance and would gas out. That appears to be the fight to make for Bellator president Scott Coker.

So while the promotion continues to pour the majority of its resources into a grand prix filled, largely, with former UFC fighters, they might just consider beefing up the next Caldwell-helmed fight card and giving the man who could be the next jewel in their crown a chance to shine. 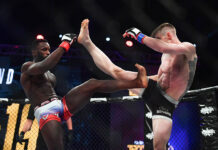