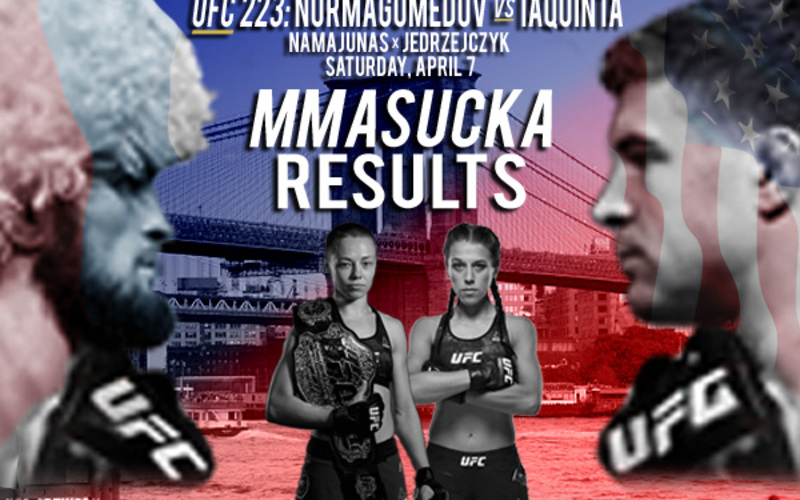 The UFC is back in Brooklyn for the first time since UFC 208 last February. We will have full UFC 223 results for you all night long.

The main event sees undefeated Khabib Nurmagomedov take on Al Iaquinta, a winner of 8 of his last 9. Unfortunately, Iaquinta will not be eligible to win the belt due to missing weight by 0.2 pounds. However, Nurmagomedov can win the belt if he were to win. Nurmagomedov is coming off a dominant win against Edson Barboza back at UFC 219. He won that fight by a dominant unanimous decision, receiving multiple 10-8 rounds. Iaquinta is coming off a win over Diego Sanchez, knocking him out in the first round back at UFC Fight Night 108.

In the co-main event, Rose Namajunas looks to defend her strawweight belt for the first time against former champion, Joanna Jedrzejczyk. The two first met at UFC 217 in November with Namajunas shocking the world, knocking out Jedrzejczyk in the first round. Jedrzejczyk blamed the loss on her horrible weight cut and looks to prove that she is still the champ tonight.

Follow along with MMA Sucka as we provide you with the results throughout UFC 223.

Well, what a week it has been for the UFC in Brooklyn. It all started with Tony Ferguson tearing his LCL and pulling out of his title fight with Khabib Nurmagomedov. Immediately after that was announced, Nurmagomedov got a replacement opponent in featherweight champion, Max Holloway. It seemed like all would go well until Conor McGregor showed up on media day. McGregor attacked a bus full of fighters looking for Nurmagomedov after videos of an altercation between him and Artem Lobov surfaced. The incident caused both Michael Chiesa and Ray Borg out of their fights due to being injured by broken glass. Plus, Artem Lobov was pulled from the card due to his involvement in the incident.

Finally, on weigh in day, the NYSAC deemed Max Holloway unfit to fight, scratching him from the main event. The UFC scrambled to find a new opponent. At first it looked like it was gonna be Anthony Pettis, Chiesa’s former opponent. Unfortunately Pettis’ price may have been a bit too high for the UFC. Then it looked like it would be Paul Felder, but NYSAC said no due to him not having a ranking. Finally, the UFC came to an agreement with Long Island native, Al Iaquinta and now here we are.