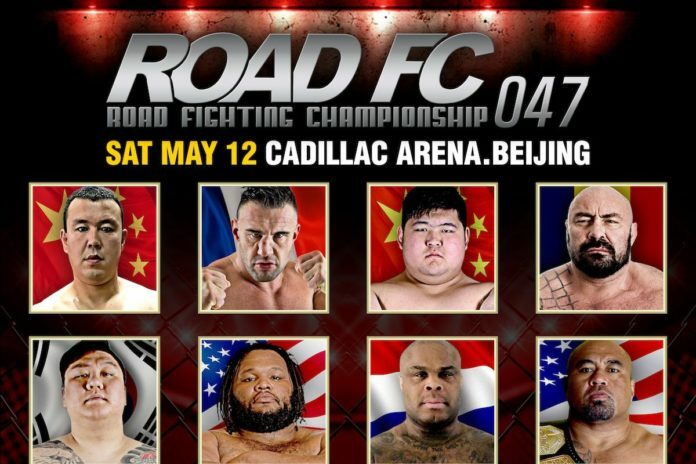 ROAD Fighting Championship announces five more bouts for ROAD FC 047 which will take place at the 20,000-seat Cadillac Arena in Beijing, China on May 12, 2018.

Eight lightweight fighters are featured, with many being previous competitors in the ROAD FC $1 Million Lightweight Tournament. Two women’s bantamweights have also been announced. 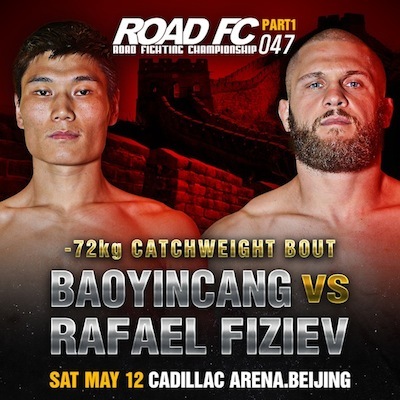 Bao Yincang (Xindu Martial Arts, 11-5-0-1) is a Chinese Sanda champion who made his name in MMA by defeating the best welterweights on his way down to lightweight. In the $1 Million Lightweight Tournament, he won the China Trials and his Opening Round match.

Rafael Fiziev (5-0, Tiger Muay Thai) of Kazakhstan is a Muay Thai champion with almost 40 wins, and his skills carried over into his MMA transition with four out of five first-round finishes by knockout. Fiziev won his bout in the $1 Million Tournament International Trials, but a hand injury kept him out of the next round. 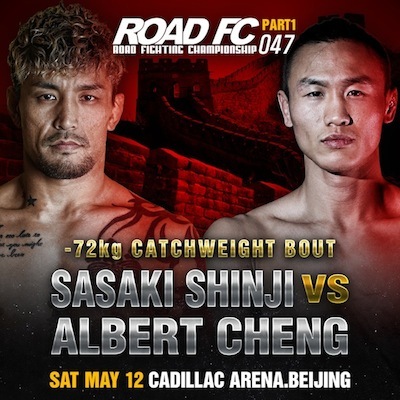 Sasaki Shinji (18-11-3, Burst) and Albert Cheng (8-4, Evolucao) met in the $1 Million Tournament International Trials in a back and forth 3-round war, with a penalty to Cheng tipping the final scorecard in Sasaki’s favor.

Sasaki, former ROAD FC title challenger and Shooto Champ, then was on the receiving end of a highlight reel-worthy KO by Amartuvshin Khuukhenkhuu which halted his Tournament run.

Cheng, a UFC and TUF China veteran, turned his focus to moving to Beijing and coaching throughout the past year, raising the bar for up and coming fighters in China. 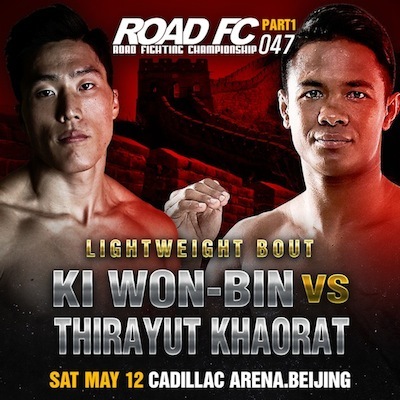 Ki Won-Bin (6-5, Team Posse) is a mainstay of ROAD FC from the amateur Central League through 2017. He participated in the $1 Million Tournament with a rocky outcome. He was submitted by finalist Mansour Barnaoui in the International Trials, then knocked out by Bruno Miranda in a reserve match.

Thirayut Khaorat (3-2, Tiger Muay Thai) is a Southern, Rajadamnern, and Omnoi Stadium Muay Thai Champion with over 270 wins to his name. In MMA, he’s only just begun to make his mark. Khaorat is the first fighter from Thailand to be signed with ROAD FC, and this is his debut appearance. 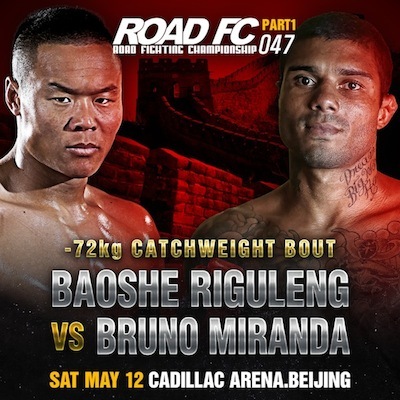 Baoshe Riguleng (1-1, Yunnan Kunli Boji) started martial arts with traditional wrestling as a child, then scored multiple national Sanda titles, won gold at the East Asian Games, and tacked on a successful kickboxing career. He transitioned to MMA in 2009 briefly and was expected to make his comeback with ROAD FC’s entry to China 2 years ago.

Bruno Miranda (10-3, Tiger Muay Thai) is a 4-year mainstay of ROAD FC who has become a fan favorite with his furious KO style and his contrasting friendly demeanor. In the $1 Million Tournament International Trials, he suffered a shocking KO by underdog Nandin-Erdene but rebounded with a first-round KO of Ki Won-Bin in a reserve match. 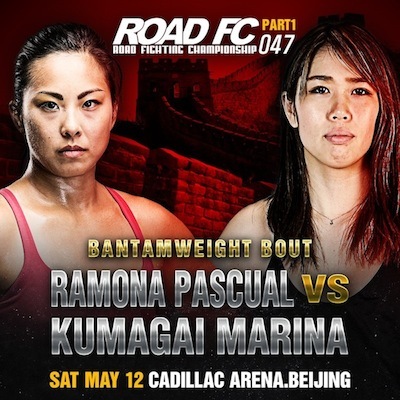 Ramona Pascual (3-2, Phuket Top Team) of Hong Kong began her combat career in kickboxing, then took up grappling, and it led to MMA. After losing back to back fights, she made a huge change by going to train in Korea. There she won a chance to be a contestant on “Fearless Guys”, a reality MMA television show, which led to Pascual signing with ROAD FC. She made her fight camp in Korea for her promotional debut on ROAD FC 45 XX and made a huge impression with a dominant victory.

Marina Kumagai (debut, Weerasakreck Fairtex Muaythai) of Sapporo, Japan has a strong base in Muay Thai. She trains with Japan’s most authentic Muay Thai team, founded in Japan over 20 years ago by Wongpasser Weerasakreck and coached by all Muay Thai champions from Thailand. Kumagai competed in Japan’s J-Network and M-One, amassing a professional record of 4-4 in Muay Thai and kickboxing. At 174cm tall, her strength is her reach and ability to distance.

These bouts join the previously announced Openweight Grand-Prix match-ups. Check out the full card below! More bouts should be announced soon.