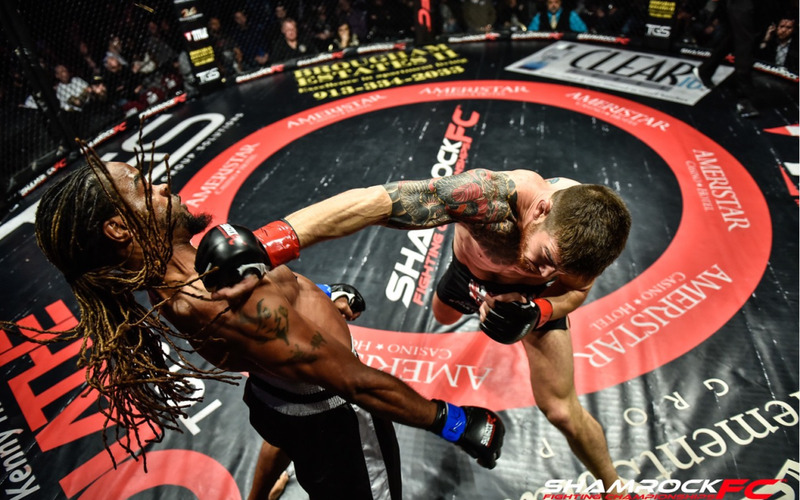 Many in the world of MMA have an established collegiate wrestling background. Not many have wrestled for a national championship-caliber school like Johnny Eblen. Eblen wrestled for the power-house University of Missouri. Mizzou has produced MMA studs like Ben Askren, Tyron Woodley, and Michael Chandler. Though his early career was plagued with injuries, he has overcome those odds to become a bright, future star from American Top Team’s ever-growing contingent of world champion caliber fighters.

Eblen joined the University of Missouri wrestling team already with a winner’s mindset. He was fresh off of a 2009 state championship at 189 pounds representing Park Hill High School (Kansas City, MO.) Prior to his arrival to Mizzou, Eblen tore ligaments in his ankle and suffered a spiral fracture of the fibula. The following year Eblen suffered a torn meniscus in his left knee, leading to yet another surgery. Just before his junior year, the bad luck continued with a dislocated right should that would later on end his season just before the start of the MAC Tournament.

Before entering his senior year, Eblen dropped down to 174 pounds to better aid Mizzou in their run for the team national championship. Despite all of the injuries and potential mental damage that could have been sustained from all the bad luck, Eblen never gave up and was actually a national qualifier in his final season as a Tiger. He was also the runner-up in the 174 pound at the MAC Championships.

Eblen would do whatever was needed to help Mizzou excel as a team. “I wrestled whatever weight my coaches told me to wrestle. I’ve wrestled at 174, 184, and 197 throughout my college career. Most of my career I wrestled at 184. I cut to 174 my senior year to help make our lineup stronger,” Eblen told MMASucka.

The Unexpected Transition to MMA

After graduating from Missouri in 2015, Eblen relocated to Florida to pursue a job opportunity unrelated to MMA. “I was working full time at a paving company and I was coaching wrestling on the side,” Eblen said to MMASucka.

“One day I met Steve Mocco, a legendary folkstyle and Olympic wrestler, now an American Top Team coach, at a wrestling practice. We were both coaching the same kid at the time. During the practice I asked Mocco to wrestle live with me. I wasn’t doing too bad at first. I was wrestling tough but then Coach Mocco whooped me bad! Mocco said ‘you’re pretty good man. You should come by ATT and check it out.’ Next thing I know I’m training every day after work.”

“Also I have to give Glory MMA a shout out because that’s my gym when I come home to Kansas City. Coaches LC Davis and James Krause played a big part in where I’m at today in MMA!”

Shamrock FC and The Future

Eblen is 2-0 in the promotion with both victories coming by first-round submissions due to strikes. He was also scheduled for a Bellator MMA Series bout against Emmanuel Verdier which would have taken place at the Homestead-Miami Speedway in Miami, Florida. Eblen was unable to participate due to already having a scheduled Shamrock FC fight the same weekend. Bellator is not out of the picture though at a long-term future home. “I think Bellator or UFC can be a home for me,” Eblen told MMASucka.

If Eblen continues to use his stellar wrestling base, look for him to continue building his name with fans. His striking has visibly improved each fight, evident of his evolution at American Top Team and with Krause. Eblen still has plenty of time to continue to develop only being 26 years old. Look for Eblen to continue to rise up the ranks and make that move to Bellator or the UFC in the near future.