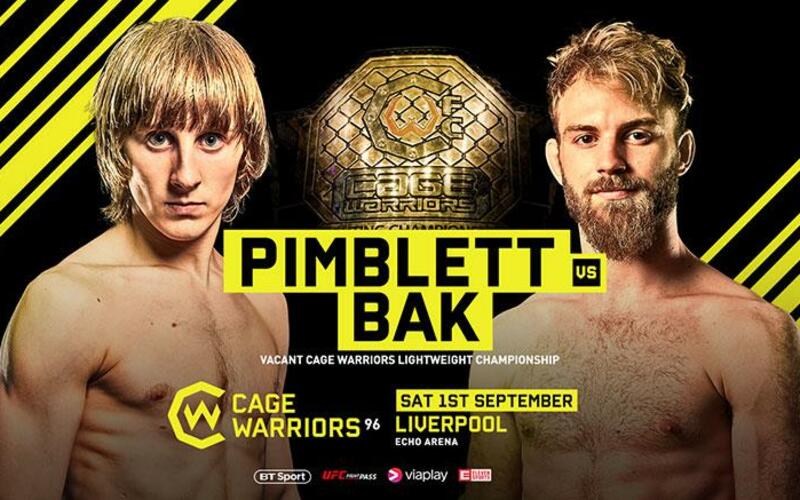 A new Cage Warriors lightweight champion will be crowned in Liverpool, England by Summer’s end. Paddy Pimblett makes his return to Cage Warriors when he takes on Soren Bak for the promotions lightweight title. The news was first reported by the Liverpool Echo and later confirmed today by Cage Warriors officials.

Pimblett made his debut with the long-standing European MMA organization in 2013 at CW 56. There he defeated Florian Calin by unanimous decision. Since the debut, the English fighter earned a promotional record of 9-2. In that span, Pimblett won the promotions vacant featherweight strap when he defeated John Frachey by KO in the opening minutes of the first round at their CW 78 contest.

He went on to defend the featherweight title once before being defeated by Nad Narimani. Following his victory, Narimani signed with the UFC.

The second challenger is another young European grappler. 25-year-old Soren Bak rides a three-fight win streak into the high stakes championship match-up. He holds three victories in as many fights with the Cage Warriors promotion, with two back to back submissions.

His first submission under the CW banner came against former TUF competitor, Martin Stapleton. When the two met at CW 88, Bak largely dominated the contest. It took nearly 20 seconds for Bak to put Stapleton on his back after a quick exchange of strikes and a few scrambles while engaged. From there, the conclusion was academic and Bak earned the submission victory almost 4 minutes into the first round.

Bak’s most impressive victory to date came recently against Alexander Jacobsen at CW 93. Jacobsen, in his own right, is among the best European prospects the region can offer. The two highly touted fighters battled for two rounds before Bak sunk in a head and arm choke from mount. By the time the submission came, Jacobsen had a face painted in deep red.

Cage Warriors 96 takes place from the Echo Arena in Liverpool, England on September 1st. At the moment, the only fighter officially scheduled for the card is Cage Warriors middleweight champion, Lee Chadwick. Chadwick looks to make his first defense of the CW middleweight title, one that he earned by defeating Victor Cheng by unanimous decision at CW 88.