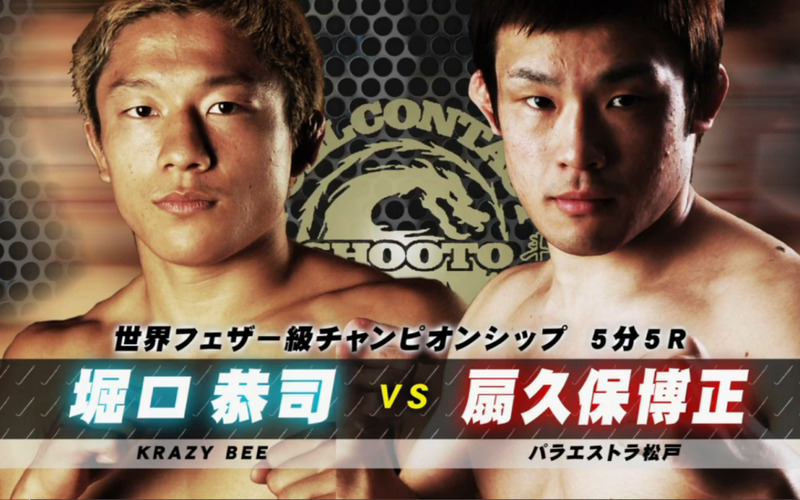 At RIZIN 11, we will see a pivotal flyweight match-up between two of the best in the world in the form of Kyoji Horiguchi vs Hiromasa Ogikubo.

But, ahead of their July rematch, it is worth reminding the masses that these two have fought in the past. Before Horiguchi became a UFC title-challenger and undoubtedly one of the best lighter-weight fighters on planet earth, and before Ogikubo got robbed of a UFC contract following a stellar run on TUF 24.

After beginning his career with a record of 6-0 with 5 knockouts, Kyoji Horiguchi tasted defeat for the first time in early 2012 when he took on Japanese legend Masakatsu Ueda, a former Shooto title-holder.

Following the first defeat of his career, the KRAZY BEE rising star won three-straight to earn his shot at Shooto bantamweight gold vs. Ogikubo. This includes dominant decision wins over Ian Loveland and Manabu Inoue.

A product of Paraestra Matsudo, we saw Hiromasa Ogikubo enter the night as Shooto Bantamweight Champion. He had won four-straight ahead of this bout and was very recently crowned champion. Meaning he was looking to make the first defense of gold vs. Horiguchi.

Entering the bout, the two fighters shared one common opponent on their current win streak. Both Horiguchi and Ogikubo convincingly defeated Tetsu Suzuki. We saw Horiguchi finish him with strikes in about two minutes, whereas Ogikubo thoroughly dominated en route to a unanimous decision.

Both guys came into the night as highly sought after Japanese prospects. And big things seemed to be on the horizon for whoever came out the victor.

Right away we saw Hiromasa – typically a grappler – throw a left high-kick. There wasn’t much power behind it, but he was letting the challenger know he was willing to strike with him a bit if need be.

It’s a fascinating fight to watch back, especially when it comes to Horiguchi. As we are seeing the early stages of what would go on to become some of the best footwork in MMA. Within a mere few seconds of the fight starting, we see Horiguchi employing a heavy movement-based approach. Throwing feints, lunging in and out, and using lots of lateral movement.

About 15-20 seconds into the round, Ogikubo looked for his first takedown of the fight. Horiguchi defended it, getting a top position of his own in the progress.

Working from guard, Horiguchi was constantly touching Ogikubo with short punches, but Hiromasa seemed more than content to just hold on. Hoping for either a referee separation or hoping Horiguchi would get wild and allow him to go for a submission from his back.

Eventually, Horiguchi was able to trap Ogikubo near the ropes and get stacked guard position. From here he was finally able to land some serious punches on Ogikubo, but shortly after, Hiromasa was able to turn Horiguchi’s aggression into a pivotal takedown of his own.

Not only did Ogikubo complete the takedown, but he also ended up directly in mount position with Horiguchi’s head and upper body trapped against the padding in the corner of the ring. The tide turns completely as Horiguchi is now in Ogikubo’s world.

Ogikubo throws a few punches, but is far more content on trying to trap the right arm of Horiguchi, perhaps looking for an armbar or kimura. But this allowed Kyoji Horiguchi to exit on the left side, take a knee, and stand back up to his feet.

After 10-20 seconds of clinch fighting against the ropes, Ogikubo ducked for another single leg takedown. But Horiguchi was able to defend, get into a good sprawl position, and land some nice shots to the head of Ogikubo for a solid 20+ seconds.

This resulted in a scramble that saw the champion try to escape, but Horiguchi followed his every movement and eventually – albeit briefly – wound up in back side control. This wasn’t a good spot to be in, so Ogikubo attempted to sweep, but had no luck.

He was able to turn over to his back however, putting the two in north/south position, with Horiguchi still maintaining top control. From here, Ogikubo very quickly tried to turn out of the position while trapping Horiguchi’s right-arm, but this finally allowed the challenger to get in the dominant back side control. From here he landed some of his best strikes of the fight, including body knees and heavy shots to the head.

Ogikubo then forced Horiguchi into his guard where he threw up a hail mary triangle attempt that was easily avoided.

After a few seconds of Horiguchi standing over a downed Ogikubo throwing leg kicks, Ogikubo went for another takedown but was promptly shoved off. Upon standing back up, he sprinted at Horiguchi and threw a jumping high kick that, unfortunately for him, didn’t get through the guard of Horiguchi.

The two were content to fight at striking range for the final 45-seconds or so of round one. Ogikubo made sure to force one more takedown right at the end of the round however. He caught the right-leg of Horiguchi as he feinted a kick and then promptly swept his left-leg out from under him. The round came to an end seconds later.

After a wildly entertaining opening round, both men entered round two with a far more calculated approach. Which isn’t saying much considering a headkick was thrown 0.9 seconds into round one.

As he measured his lunges, Ogikubo tried to shoot a double leg as Horiguchi came in. But the challenger was quick to notice and immediately stepped back, the champion noticed that as it was too late to go back on the takedown attempt. So he tried to get creative with his attack and looked to grab a hold of a leg in a likely attempt at a leglock.

He fell short and yet again ended up with Horiguchi on top of him from back side control, throwing bombs.

Despite the dominant position and being absolutely relentless from that position, Kyoji Horiguchi realized after countless strikes that Ogikubo was defending very well and eventually just allowed him back to his feet.

This would end up being the demise of Hiromasa Ogikubo. As he recklessly charged in looking for a takedown, chasing Horiguchi all around the ring, this allowed the challenger to defend the takedown and get into prime position for a rear naked choke.

Kyoji Horiguchi wasted no time at all to lock in the choke. And the tap came at 2:06 of round two. The recklessness and sloppiness of Hiromasa Ogikubo cost him the fight and his Shooto Bantamweight Championship.

This fight was, on-paper, a striker vs. grappler match-up. Perhaps not in the classic sense, as both guys were (and are) definitely serviceable everywhere. But, if not by decision, in virtually everyone’s mind, this fight ended one of two ways. Either Horiguchi becomes the champion with an emphatic knockout, or Ogikubo defends his strap by submission.

So Kyoji Horiguchi forcing Hiromasa Ogikubo to submit was truly an eye-opener for a lot of people.

Following this title win, Horiguchi would never compete under the Shooto banner again. He improved to 10-1 and fought for VTJ just three months later, this time defeating Shintaro Ishiwatari via fifth-round KO in an absolute war.

Four months later he made his UFC debut and began a 4-0 run in the promotion that eventually led him to a flyweight title shot vs. all-time great Demetrious Johnson. After being submitted in the very last second of a 25-minute fight, Horiguchi bounced back with three-straight wins over top contenders before leaving the UFC, returning to Japan under the RIZIN banner.

He currently stands at 6-0 in RIZIN Fighting Federation and is essentially the face of the company after winning their bantamweight grand-prix and knocking out Ian McCall in 8-seconds.

Much like Horiguchi, Ogikubo found himself in Vale Tudo Japan following their title fight – this after he took nearly an entire year off. He competed in a multi-month long bantamweight tournament under the VTJ banner, coming out the eventual tournament champion.

He then returned to Shooto for one fight before going and claiming the Mobstyles title in early 2016 with a fifth-round submission win over Masaaki Sugawara. He then had his 3-1 stint on TUF before returning to Shooto in 2017, defeating UFC veteran Danny Martinez, and submitting Tadaaki Yamamoto in a flyweight title bout this past October.

The two will meet once more next month at RIZIN 11, live from the Saitama Super Arena.

Be sure to watch Kyoji Horiguchi vs Hiromasa Ogikubo I from Shooto Japan: 2nd Round 2013 right here!