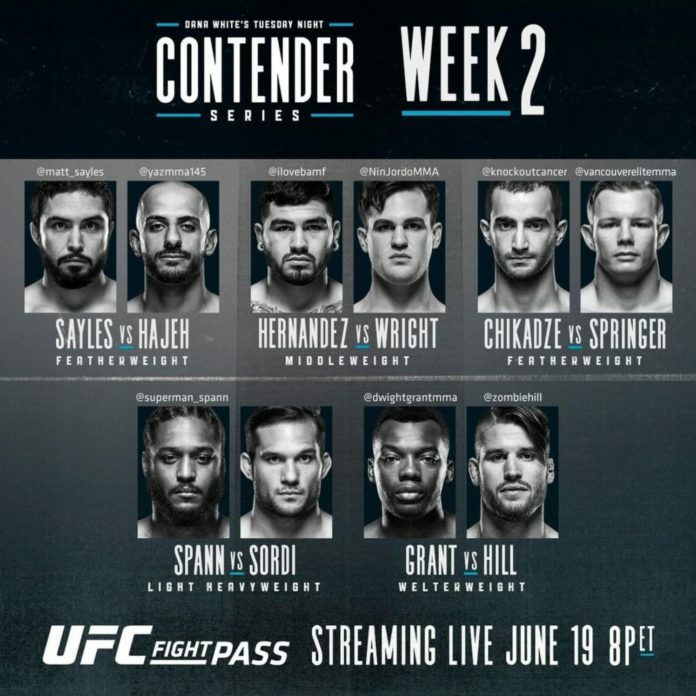 The main event will feature two featherweights as 6-1 Matt Sayles takes on the undefeated Yazan Hajeh. Sayles is coming off a win over Christian Aguilera in March at CFFC 64. His opponent, Hajeh, is coming off his sixth straight victory when he defeated Oscar Valdez at LFA 21.

Before the main event, we will see middleweights, Anthony Hernandez and Jordan Wright battle it out for a contract. Both fighters are undefeated, with Hernandez at 6-0 and Wright at 9-0. Both fighters’ most recent victories also came under LFA.

Also on the card, GLORY veteran Giga Chikadze will take on Austin Springer. Chikadze only holds one loss with a record of 5-1. His most recent outing was a win over Kevin Ceron under the promotion, Gladiator Challenge. Springer’s most recent win came at ExciteFight – Conquest of the Cage when he defeated Troy Berglund to improve his record to 9-2.

The second fight on the main card will feature a familiar face as Ryan Spann returns to the Contender Series, this time facing Emiliano Sordi. Spann competed in the last season of the series but came up short in his fight against Karl Roberson, who would go on to earn a UFC contract. Since then, he’s won three straight, including a win over former UFC fighter Alex Nicholson in his most recent outing at LFA 32. His opponent, Emiliano Sordi, is coming off a win over Douglas Santos at Arena Tour 9 to improve his record to 16-6.

Finally, to kick off episode two, Dwight Grant will take on Tyler Hill. Both fighters most recently competed for Bellator. Grant’s most recent outing came at Bellator 165 when he defeated Danasabe Mohammed. Hill is coming off a loss under the Bellator banner at Bellator 162, losing to Wade Johnson.

Follow along with MMASucka as we will provide live results as the card progresses. The full card will be listed below.