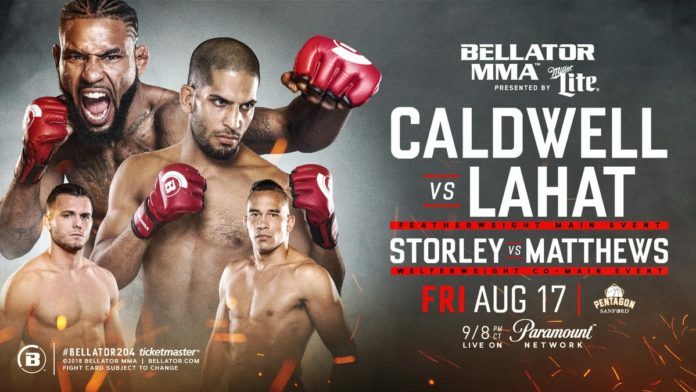 Bellator MMA will make its debut in Sioux Falls, South Dakota on Friday, August 17. Bellator 204, live from the Sanford Pentagon, will see Bellator bantamweight title-holder Darrion Caldwell look to test himself at featherweight vs. Noad Lahat.

Bellator announced the news on Friday.

“I’m excited to bring Bellator to Sioux Falls this summer with a great venue partner in the Sanford Pentagon,” Bellator President Scott Coker said. “I always look forward to visiting a new market and having a crowd experience a live Bellator event for the first time. This is a great card with a lot of intriguing matchups that I know fans will enjoy. With this being such a strong wrestling community, I’m also excited to feature several former collegiate wrestlers on Aug. 17, including Darrion Caldwell and South Dakota’s Logan Storley.”

Darrion Caldwell (12-1) is a native of Rahway, New Jersey, and the current Bellator Bantamweight Champion. ‘The Wolf,’ has quickly emerged as one of the most well-rounded athletes in the world at 135-pounds, collecting nine victories since joining the Bellator roster in 2013.

The 2009 NCAA D1 Champion boasts a stellar resume that includes five first-round finishes, a 25-minute war with Eduardo Dantas that saw him become champion, and a quick submission finish over Leandro Higo in his first title defense earlier this year. Caldwell will be looking for his fourth-straight win when he competes as a featherweight for the first time since 2014.

Noad Lahat (12-3) is a solid Brazilian Jiu-Jitsu black belt current training at the famed Xtreme Couture gym in Las Vegas. The 34-year-old Israeli made his professional debut in 2008, kicking things off with seven-straight wins.

Prior to transitioning his focus to mixed martial arts, Lahat proudly served as a soldier in the Israeli Defense Forces. Since signing with Bellator, he has amassed a record of 3-1 with his most recent win coming against Jeremiah Labiano this past November. Lahat now has the opportunity of a lifetime in front of him as he faces a promotional champion.

Hailing from Webster, South Dakota, the undefeated 25-year-old Logan Storley (8-0) will make his fourth appearance inside the Bellator cage in front of his hometown fans at Bellator 204. The four-time NCAA All-American wrestler from the University of Minnesota has quickly climbed the ranks as one of the most dangerous welterweight prospects in mixed martial arts.

This due to him earning eight-straight victories to begin his MMA career, including six knockouts and five first-round finishes.

Fighting out of California, AJ Matthews (9-7) will be making his eleventh appearance under the Bellator umbrella; a seven-year stretch that has seen him earn five victories, including a pair of first-round knockouts and a highlight-worthy soccer-kick finish against Charlie Rader.

If nothing else, the 30-year-old knows how to put on a show and – regardless of the outcome – is known to compete in the best fight on the card more times than not. He looks to build on his recent Kendall Grove win at Bellator 193.

Bellator 204 is slated for August 17, live from the Sanford Pentagon in Sioux Falls, South Dakota. No other bouts have been announced as of yet.