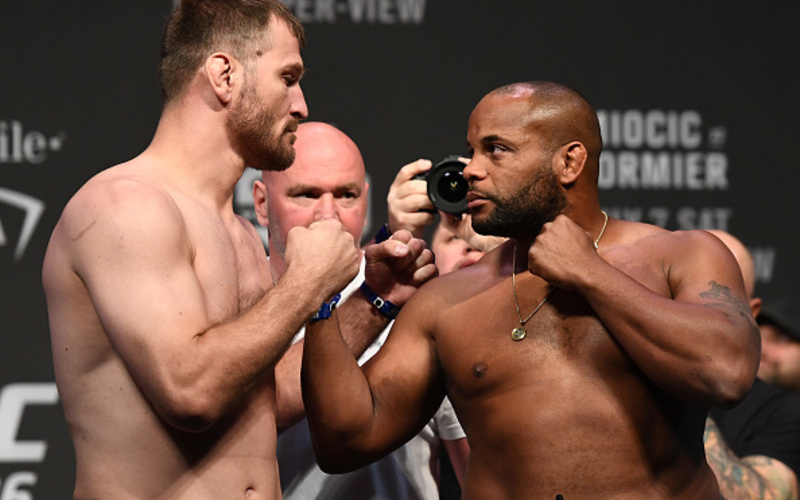 The biggest fight of 2018 is finally upon us. Check in with our UFC 226 results as it all goes down tonight.

Cormier also fought that same night that Miocic defended his belt for the third time. That night, “DC” took on the surging Volkan Oezdemir as he looked to defend his belt for the third time. In the first round, Cormier was able to stay away from the power of Oezdemir and out-landed him on the feet. In the second, Cormier used his wrestling to take Oezdemir down and eventually finished him with ground and pound for the TKO victory. Not long after this event, it was announced that both these men would coach season 27 of The Ultimate Fighter. After their time as coaches, they’d face off at UFC 226.

Along with the heavyweight title fight, we will see an important heavyweight matchup in the co-main event. Francis Ngannou returns to the octagon since losing to Miocic to take on Houston‘s Derrick Lewis. Lewis has been targetting this fight for a long time now and has finally gotten his wish. The winner of this fight could ultimately face the winner of the main event.

The rest of the main card also promises for very exciting fights. Before we watch the co-main event, Paul Felder looks to get his first win at welterweight as he takes on Mike Perry. Felder was originally supposed to fight next week in Boise against James Vick. Vick was removed from that fight to take on Justin Gaethje in August, leaving Felder without an opponent once again. That same day, it was announced that Yancy Medeiros broke a rib and was removed from his fight against Perry. This opened up an opportunity for Felder and he immediately began campaigning for the fight. He would eventually get it and now, here we are.

The second fight on the main card will see two top lightweights. Former lightweight champion, Anthony Pettis will take on Michael Chiesa. These two were originally scheduled to meet at UFC 223, but after an incident on media day, Chiesa was injured and forced out of the fight. Also, kicking off the main card will be the return of kickboxing star Gokhan Saki as he takes on Khalil Rountree Jr.

Follow along with MMASucka as we provide you with the results throughout UFC 226.