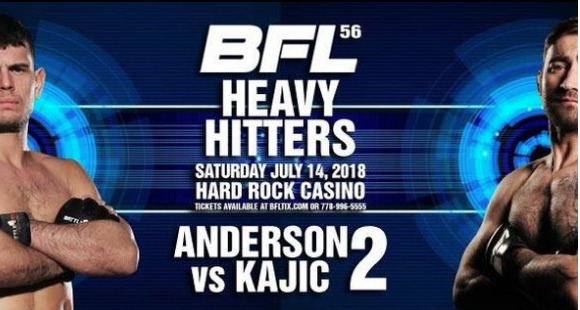 Battlefield Fight League returns to the Hard Rock Casino in Coquitlam, British Columbia for some summer mixed martial arts action. We will be bringing you BFL 56 results all night long.

The main event is a grudge match, between former two-division champion Chris Anderson, as he takes on Dejan Kajic for the vacant middleweight championship. The featherweight title is on the line in the co-main event, as former foes Nick Ghaeni and Gaggan Gill square off once again.

Check out BFL 56 results below

On the amateur portion of the card is a battle between Josh Morgan and Terrence Spina for the vacant heavyweight championship.

Along with the MMA portion of the card, there will also be kickboxing/Muay Thai action and the card gets underway with two grappling matches.

Keep it locked to MMASucka.com for all your BFL 56 results.