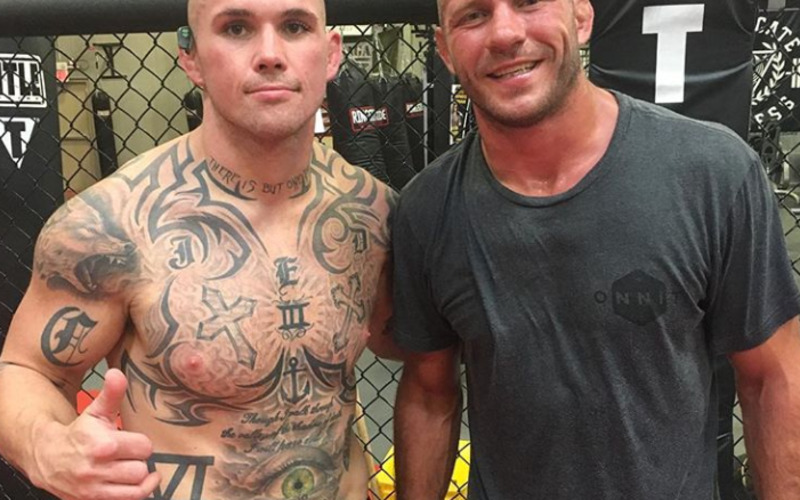 Louisiana has produced many top level MMA fighters. Many have been successful in the UFC. The current “champ champ” of the UFC’s heavyweight and light heavyweight division, Daniel Cormier, is from Lafayette, LA. Top lightweight UFC contender, Dustin Poirier, also calls Lafayette home. Another of those names from the Lafayette MMA system is JD Domengeaux.

Warrior. A word thrown around in the world of MMA too often. In the case of JD Domengeaux, it fits perfectly. The 30-year-old Domengeaux’s first exposure to the world of MMA came as it did to many fans and fighters, through the UFC.

“It started with watching UFC PPV’s with my friends,” Domengeaux told MMASucka. “That led to me signing up at my first MMA school, Gladiators Academy. Not long after that I realized I wanted to do this for a living.” Gladiators Academy was started in Lafayette by former UFC veteran Tim Credeur. Credeur is the first Brazilian Jiu-Jitsu black belt in the state of Louisiana.

Beginning the Reign of Destruction

In 2010 Domengeaux began his journey in MMA taking on his first amateur bouts. He fought on the regional circuit for local organizations such as USA-MMA and Atlas Fights. Both organizations today are still around and host premiere regional talent in the Louisiana/Mississippi area. After all of his victories coming by finish on the amateur scene, Domengeaux made the move to the pros in 2012. This is around the same time Gladiators Academy teammate, Dustin Poirier, would relocate to powerhouse American Top Team.

The Hunger For More Knowledge

“I came down and saw how hungry everyone was. There were so many fighters in there; you were feeding off the hunger and determination of everybody in there. I knew I had to be there. After those two weeks, I knew I had to move down.” American Top Team was a big step up from Gladiators Academy. Gladiators is known for its amazing jiu-jitsu program but ATT gave Domengeaux the extra knowledge needed to step up his game. In each of Domengeaux’s fights, win or lose, progress is always witnessed. Progress was never more evident than in the rematch against Portland Pringle III.

After starting his professional career 1-2, Domengeaux spent the next two years winning eight fights in a row. All eight wins came by submission or knockout.

Domengeaux was going through all of the prospects the regional organizations could throw his way. Over two full years from his last defeat, Domengeaux would run into Portland Pringle III for their first meeting. Their first battle took place at Odyssey Fights Battle on the Base in Arlington, Virginia. Pringle was able to lock in the rear naked choke near the end of the first round. Many times a defeat can send a fighter into a tailspin they are unable to recover from. Domengeaux took a fight four months later against Josh Davila at WFC 63. Domengeaux rebounded well, scoring a second-round knockout.

A Shot at Redemption

The stars aligned just right for the rematch which took place at WFC 77 in August 2017, 11 months after their initial battle. Throughout the first round, Domengeaux stayed composed with precise strikes, especially the body and head kicks. His shots were systematic and precise throughout the whole contest. Near the end of the third round, covered in blood, Domengeaux continued to take the fight to Pringle showing his dominant ground game, nearly ending the contest with a submission. Domengeaux avenged his loss and won by unanimous decision.

“I am grateful for Portland,” Domengeaux stated to MMASucka. “He made me a better fighter after that first fight, and I showed my progress in the second.”

The Future for JD Domengeaux

Domengeaux currently trains at Syndicate MMA in Las Vegas, NV. Syndicate is home to many current UFC fighters such as Khalil Rountree, Roxanne Modafferi, Jessica-Rose Clark, and Julian Marquez. Domengeaux has not forgotten his roots in his MMA journey. “There are many great people that have helped me throughout my journey in this sport. I was able to train at great academies like Gladiators and American Top Team. Now I start a new chapter in Las Vegas with Syndicate MMA,” Domengeaux told MMASucka.

When asked, “Why should you see JD Domengeaux compete?” He replied with, “I encourage everybody to go support a local MMA event. If I happen to be on it then great, you will have a chance to see some amazing tattoo work by my boy Sean.”