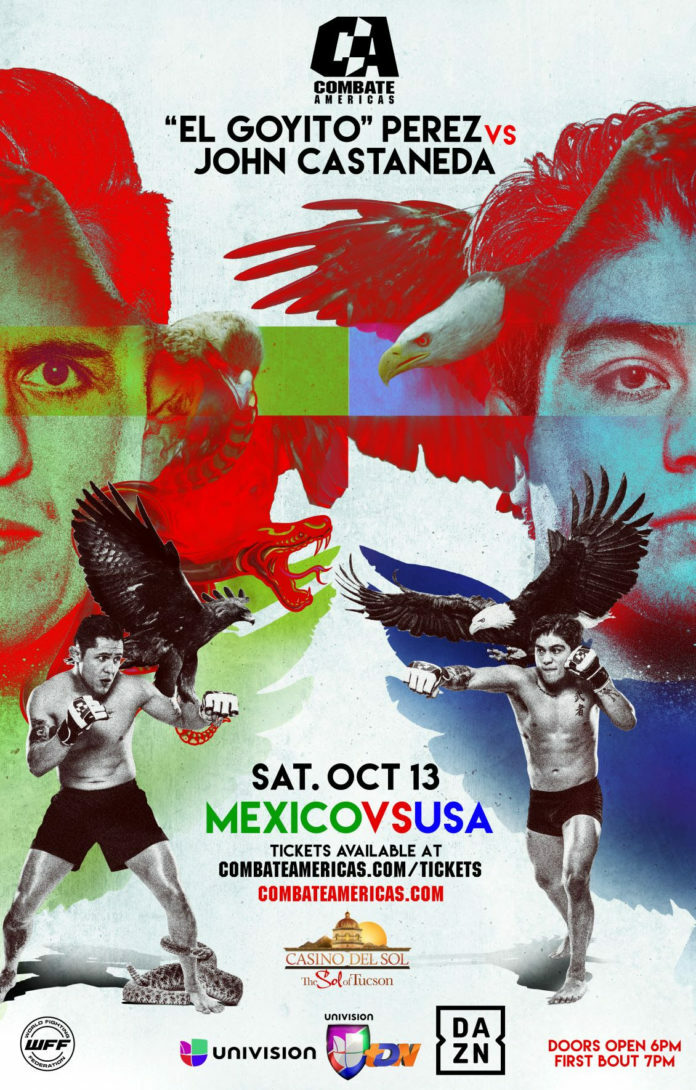 The show will be headlined by a stellar bantamweight showdown between exciting world-ranked superstars “El Goyito” Erik Perez (18-6) and “Sexi Mexi” John Castaneda (16-4), live from the AVA Amphitheater at the Casino Del Sol in Tucson, Arizona on October 13.

“Both Mexico and the United States have eagles as symbols, and this fight between “Goyito” Perez and John Castaneda is, indeed, a clash of ferocious fighting eagles.”

The winner of the match-up between Perez of Monterrey, Mexico, and Castaneda of Mankato, Minnesota will become the #1 contender to the newly crowned Combate Americas Bantamweight Champion; Jose “Pochito” Alday.

Perez, who relatively recently left the UFC on a three-fight win streak with an overall promotional record of 7-2, made his Combate debut in April. Here he avenged one of his only defeats with a third-round knockout over DJ Fuentes in the main event of ‘Combate Estrellas II’.

Castaneda, the runner-up in the inaugural ‘COPA COMBATE’ one-night, eight-man $100,000 tournament in 2017 is looking to return to the win column after suffering a split decision defeat against champ Alday at ‘Combate Estrellas I’ in April.

Juan “El Molo” Pablo Gonzalez (7-1-2) of Buenos Aires squares of with Tucson, Arizona’s Mario Bautista (5-0) on the prelims as well. Arturo “Chucky” Guzman (2-2), also of Tucson, will collide with Kasey Tanner of Scottsdale.

It is worth noting that, aside from the Perez/Castaneda headliner, all of these fights – including Birchak – are on the undercard. More bouts, including the co-main event, will be announced soon.