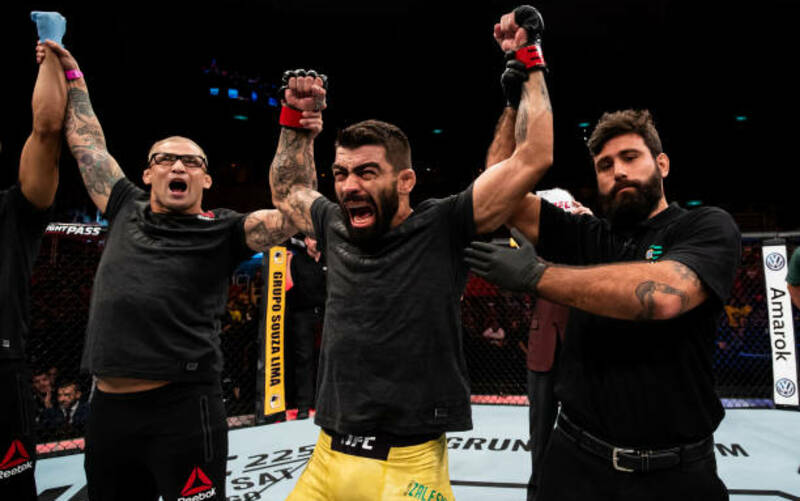 Listen, we get it. In today’s 24/7 news cycle, you may not have the time to delve deep into each and every fight of each and every event. You might not even have time to read an in-depth preview.

Well, we here at MMASucka have got you covered. In this article, we’ll break down all the fights to keep an eye on in under seventy-five words. Welcome to the Bite-Sized Preview: UFC São Paulo edition.

Souza will be making her UFC debut. She has a lot of steam behind her, having only lost to Angela Hill.

Chambers is riding a two-fight losing streak to Paige VanZant and Nadia Kassem. With another loss, Chambers might find herself looking for employment elsewhere.

Man, this is gonna be good. Elizeu “Capoeira” (19-5 MMA, 5-1 UFC) is a violence machine with four “Performance” bonuses. His last fight was a first-round wheel kick KO. He’s on the verge of being ranked and is moving on up.

Vendramini (7-0), 22, is an undefeated Brazilian finisher looking to capitalize on short notice. He made his name in Jungle Fight, racking up four submissions and three KOs.

Leites (27-9 MMA, 7-5 UFC), 37, is in marginally better shape. He has dropped three of his last four, losing his latest by a brutal third-round, comeback TKO by Jack Hermansson.

You MUST BE mistake free when facing @ThalesLeites. 😳 #UFC224 pic.twitter.com/gAM1kl5wss

Gillian Robertson (5-2 MMA, 2-0 UFC) spoiled the UFC debut of Liverpool’s Molly McCann with a second-round RNC. She’s gotten four submissions in her career, and has only lost twice as a pro: once in her debut, and the other to Cynthia Calvillo.

Brazil’s Silva is 4-0 with three finishes. She recently won on the Contender Series Brazil to punch her ticket to the UFC. It’s a great match between young, hungry strawweight contenders.

Sergio Moraes (13-3-1 MMA, 7-2-1 UFC) has lost one time since 2012. That loss came to Kamaru Usman. The jiu-jitsu ace has been a consistent grinder at 170 pounds, holding wins over notable competition. He’s looking to make it two straight against Saunders.

Saunders (22-9-2 MMA, 10-6 UFC) is an action fighter. The Eddie Bravo black belt has 17 finishes. Recently, he knocked out Jake Ellenberger after falling to Alan Jouban a fight prior.

Thank you so much for the #highlight with a sick track! 🔥#Repost @mmagamesnfighting
・・・
The Killa bee 🐝 held down his honeycomb 👹
UFC Fight Night 131#BenSaunders defeats #JakeEllenberger via KO/TKO at 1:56 of Round 1
Follow the homie @BenSaundersMMA pic.twitter.com/Ys0JKdZah4

That concludes a Bite-Sized Preview for the Fight Pass Prelim portion of UFC São Paulo. This part of the event will air on UFC Fight Pass on September 22.