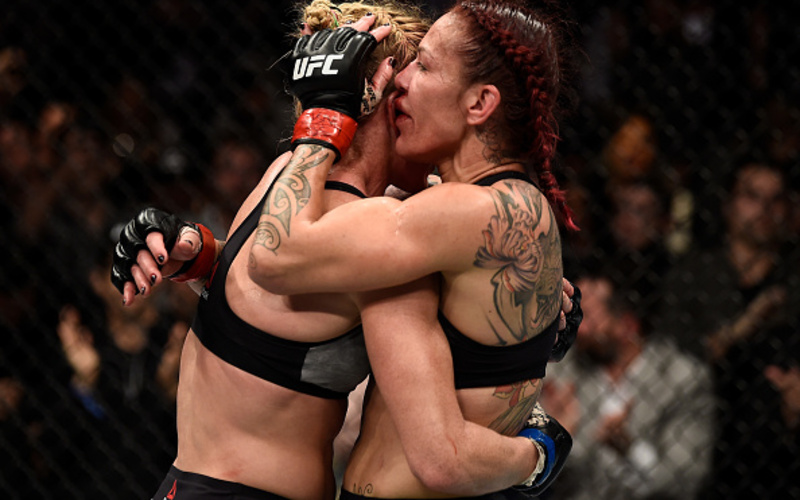 A saying among WMMA fans is that “the women always bring it.” They bring the heat, they bring the fun, they bring technical precision and savage brutality, they bring rivalries as intense as any in MMA, and they bring grace and sportsmanship in both victory and loss. And they brought it in 2017 women’s MMA.

WMMA was bookended by two great fights: UFC Bantamweight Champion Amanda Nunes’ explosive round one TKO of Ronda Rousey on Dec. 30, 2016, and Cristiane “Cyborg” Justino’s successful defense of her UFC Featherweight strap against Holly Holm in a surprisingly close five-round UD on Dec. 30, 2017.

Scattered among the 52 weeks between those two fights were more WMMA fights in a year than ever before, with some of the best fighting ever seen in a cage. Fans watched the rise of newbies and the fall of vets, saw new divisions added, rosters trimmed and rosters filled, straps lost and straps kept, roared in surprise and awe as potential GOATs collapsed covered in salt and blood, and saluted those who retired from the sport with their heads unbowed and their shields slung across their backs. Even though the United States is considered the hub of the sport, active fighters make up a United Nations of combat, and women fought in promotions on almost every continent across the world.

Fans and media aren’t the only ones who love watching the sport and the spectacle and tweeting about it. Fighters love kicking back and watching fights as much as we do. UFC, Invicta, LFC, BAMMA, RIZIN, BCMMA, ammy and professional fights, they love them all. It’s as much in their roles as fans as elite athletes that MMASucka put out the call and asked WMMA fighters what they thought of the year of fights in 2017. We asked their opinion on:

WMMA Fight of the Year

WMMA Fighter of the Year

Most Underrated WMMA Fighter of 2017

Our judges are from a range of weight divisions, promotions, ages, status and experience, and backgrounds. They are:

WMMA FIGHT OF THE YEAR

Celine Haga: “So many good fights, but Rose Namajunas vs Joanna Jedrzejczyk was a fight that really surprised me.”

Julie Kedzie: “Either Cyborg vs. Holm or Livia Souza vs. Janaisa Morandin.”

Andrea Lee:  “Cyborg vs Holm, but the best TKO was Rose Namajunas over Joanna Jedrzejczyk, and sub of the year was Claudia Gadelha’s choke over Karolina Kowalkiewicz.”

Ann Perez de Tejada: “Namajunas vs. Jedrzejczyk. Leaving aside that Rose is a friend of mine, and a class act, it was an awesome fight. The result not only of skill and hard work, but of mental discipline and probably spiritual growth as well! I was very impressed.”

WMMA FIGHTER OF THE YEAR

Kia Lola: “I would have to give this to either Rose Namajunas or Cris Cyborg. Cyborg has been dominant in this sport since she started in the sport as a pro, but there’s something to be said for a fighter considered to be an underdog entirely to step up to someone as dominant as Joanna Jedrzejczyk and win in the fashion she did. Furthermore, Namajunas remained calm and showed thorough sportsmanship despite the intense jabs verbally and physically. I respect that.”

Felicia Spencer: “I keep thinking of Holly Holm, for constantly stepping into tough fights and handling herself so well in both victory and defeat.”

Bryony Tyrell: “Rose [Namajunas] for her incredible win over Joanna, and for setting a great example to other fighters with her humble and respectful attitude.”

MOST UNDERRATED WMMA FIGHTER OF 2017

Alexa Connors: “Jessica-Rose Clark (Jessy Jess). She will be the new flyweight champ of 2018.”

Kia Lola: “Again, I’d like to say Cris Cyborg. I think she genuinely is one of the most well rounded, hard-working, and dominant female fighters to walk this planet. That being said, there are some amazing fighters like Andy Nguyen and Andrea KGB Lee who have strong followings, but should be up on the same platform as, say, Sarah Kaufman, Tecia Torres and the like.”

Andy Nguyen: “Road FC Champ Seo Hee Ham. I knew she was underrated, and is doing well as an atomweight.”

Bryony Tyrell:  “I think Kate Jackson has always been massively underrated, perhaps because she doesn’t play up to the media aspect of the game. That did start to change this year with her being signed to Bellator, but I think she could beat a lot of the women signed to the UFC.”

Cortney Casey: “For there to be a female fight on every card..”

Alexa Connors: “For the newly signed women’s UFC fighters to make a statement and give the vets a run for their money!”

Celine Haga: “More weight classes for women added to Bellator and other big promotions. I’m excited to see the growth of the 125 division in the UFC as well.”

Julie Kedzie: “A 105 division in the UFC, and more females headlining cards.”

Andrea Lee: “With the UFC finally at four women’s divisions, I’d like to see all UFC cards carry at least one women’s bout. Also, I’d like to see them add the 105ers this year. I think they are missing out on a lot of great fights and personalities by ignoring the atomweights.”

Kia Lola: “I’d like to see the 125 lb. division develop within the UFC, I’d like to see Cris Cyborg not having to wait so long between willing opponents, and also see education regarding safe weight-cutting tactics cut out some of the hospitalizations and deaths we’ve seen the past few years.”

Andy Nguyen: “An Atomweight division in the UFC.”

Ann Perez de Tejada: “I’d like to see WMMA continue to develop the way it has been.”

Bryony Tyrell: “I’d like more British female fighters to be recognized. In the USA, it seems that female fighters are valued just as much as the men, but in the UK that doesn’t seem to be the case. The smaller promotions in the UK are pretty good, but it would be good to see the bigger organizations promoting WMMA more. It would also be nice to see more British women represented in the UFC and Invicta.”

Sam Wilson: “Invicta making it to broadcast television and the fighters getting pay increases, and for the UFC to invest in Invicta without owning them. The UFC is taking the greater talent from Invicta, which leaves them struggling with main events that will bring viewers.”