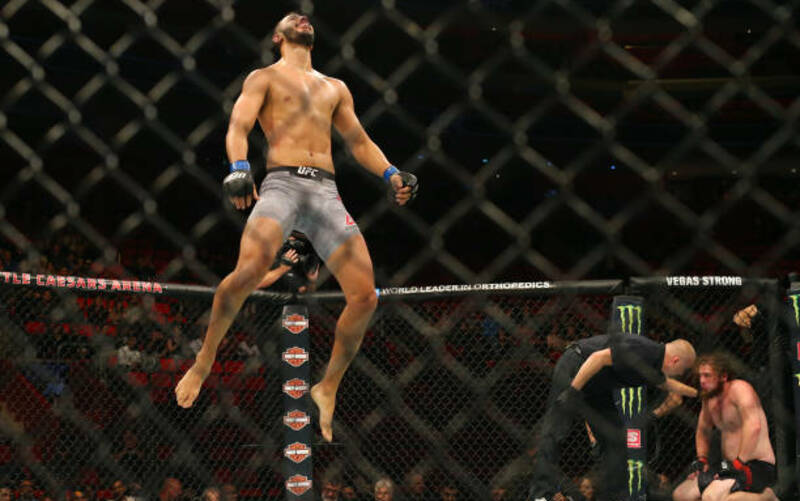 At UFC 229, Dominick Reyes will have the toughest task of his young MMA career. The 28-year-old surging light heavyweight contender will take on former interim title challenger Ovince Saint Preux. This fight hasn’t been getting much attention compared to some of the other fights on the card. However, on what is expected to be the biggest card of all time, many fans will potentially get to see the continued rise of a future light heavyweight star.

The only real knock on Dominick Reyes is the lack of elite competition he has faced to this point. Three of his first five fights took place in King of the Cage, one took place in Gladiator Challenge, and the other was in Hoosier Fight Club. In these five fights, Reyes was 5-0 with three knockouts, one submission, and one unanimous decision. His next fight would end up being the most important fight of his career to that point.

Reyes’s sixth fight took place at LFA 13 in California. His opponent was Jordan Powell. Reyes would go on to win the fight with a vicious head kick knockout. As shown in the video below, Powell seemed to be showboating a bit and never saw the kick coming that would knock him out cold. The knockout ended up going viral, and Reyes would get the call from the UFC soon after. The biggest highlight of his career was the one that got him to the biggest MMA promotion in the world.

Dominick Reyes came into the UFC and made his presence known in his very first fight. His debut came at UFC Fight Night 112 against Joachim Christensen. It would only take Reyes 29 seconds to earn his first UFC victory, coming via TKO. Commentator Jon Anik was impressed, as was UFC president Dana White. Reyes earned a performance of the night bonus for the knockout, and his UFC career was off and running.

"There's a new force to be reckoned with and his name is @DOMREYES!" — @Jon_Anik

In his next fight, Reyes took on Jeremy Kimball at UFC 218. This time, it wasn’t a TKO, but a first-round submission victory for Reyes. He would continue to add to his streak of first-round finishes at UFC Fight Night 129. Reyes saw a slight step up in competition and took on Jarden Cannonier. The impressive TKO victory would be Reyes’s third first-round finish in as many UFC fights. A spot in the top 15 and a fight with a top guy were clearly in the immediate future of Dominick Reyes.

After a flurry of strikes, Dominick Reyes win by TKO. pic.twitter.com/sZutKEp3Ci

When it was announced that Reyes would be facing Saint Preux at UFC 229, it was apparent that the UFC felt they had a future star on their hands. Reyes comes into the fight ranked 12th in the light heavyweight rankings, while OSP is ranked seventh. Despite this being Reyes’s first time being ranked, and OSP being ranked higher, Reyes is a significant betting favorite heading into the fight. There is no lack of confidence with Reyes. Being a betting favorite against a former interim title challenger will have his confidence through the roof come fight night.

Reyes’s thunderous left hand will be his best friend in the fight. He has obviously never faced anyone close to Saint Preux’s level as a mixed martial artist. OSP is a very well-rounded fighter, which could potentially pose a threat to Reyes’s striking-heavy style. Still, Reyes feels confident in his ability to win a slugfest with OSP. He posted this to Instagram, essentially saying this his striking will be too much for Saint Preux.

This fight will be nothing short of entertaining. Both guys have finished more than their fair share of fights in their respective careers. And, if Reyes can pull it off, he will be able to cement himself as a legitimate light heavyweight contender. Through just four UFC fights, that would be a huge statement to make.