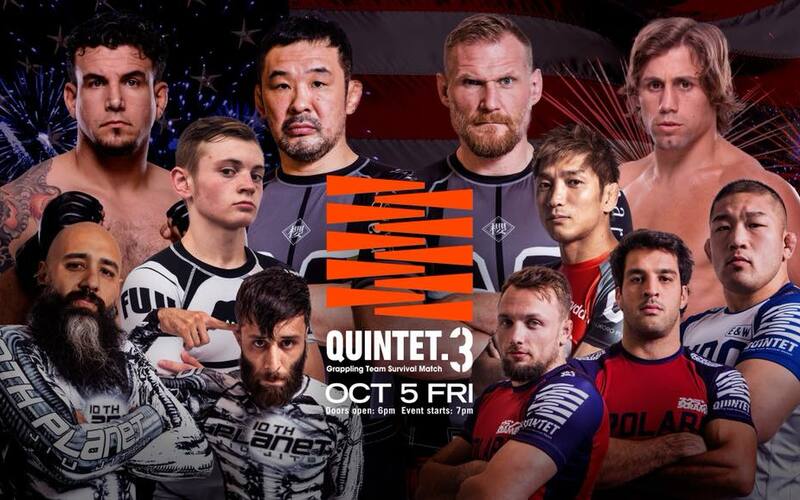 QUINTET 3 wrapped up last night in Las Vegas continuing its momentum and taking advantage of UFC 229 the following day. Below are some takeaways from the latest landmark event from the 5-on-5 Team Grappling promotion:

1. Action…Action, did we say Action?!

QUINTET is Kazushi Sakuraba’s creation to reinvent grappling into a presentation more palatable to audiences. Its focal point is forcing action, and, wow, it succeeds! Appropriate and earnest stalling calls force action in grappling contests between the most elite of the elite. On October 5, we witnessed devastating armbars, triangles, arm triangles, kneebars, a :21 guard pull-to-Achilles lock, kimuras, and rear naked chokes. It’s hard to put into words how amazing this event was. If you missed it, check it out on UFC FIGHT PASS.

2. Gordon Ryan is a cheat code.

After watching the first QUINTET, I likened the ruleset and structure to “Team Battle” in Soul Calibur, Mortal Kombat, or another fighting video game. There the concept is to select five fighters and fight as a team. Once a fighter’s health is depleted, the next fighter jumps in to replace them against the opponent’s current fighter. Last team standing wins. The concept in QUINTET is identical except fighters “tap out” instead of losing all of their health.

Gordon Ryan is the wall you face in “Team Battle.” He’s the overpowered character nobody is allowed to use. When you fight him, you know it takes at least two of your guys to get through him. In QUINTET, you can pray for your guy to hold out for 8min to get Gordon Ryan out with a draw. Good luck with that. Gordon Ryan is powerful, aggressive, and versatile. He tapped Josh Barnett with a triangle. With Ease. At QUINTET 3, he was the end of the road for every team competing against Team Alpha Male.

Everyone in the Brazilian jiu-jitsu world knows 10th Planet Jiu-jitsu. It’s the name for Eddie Bravo’s unique no gi grappling system. And it’s effective. What has stood out at QUINTET is how close-knit this clan is. They act like a real team with a head coach. For amateur wrestling fans, the team resembled a D1 NCAA wrestling program competing at Nationals. Eddie Bravo was Cael Sanderson of Penn State.

Bravo was loud shouting out instruction and encouragement to his team. He was vocal during an unusual break in the action between a Martinez brother and Gregor Gracie. Gracie clearly took a knee to the family jewels, but Eddie Bravo fought for his team shouting out that there shouldn’t be breaks at QUINTET.

Eddie Bravo also uses his role to influence the refs just like what wrestling coaches do. He’d say things like “You’re working. Keep working” to his guys to discourage the ref from calling stalling and instituting a standup. This was an interesting take on QUINTET as the other teams didn’t have designated head coaches.

4. And about those stalling calls…

QUINTET does not tolerate passivity or stalling. Competitors — and often both at the same time — can get called for stalling and receive a warning. Three warnings result in a disqualification. This is a great system in theory and results in great action.

Overall, this has worked well for QUINTET. The problems are that there isn’t always uniformity and sometimes superior grappling positions are unreasonably taken away. What stalling is and what it isn’t is not clearly defined.

Some grappling positions require perseverance and methodical, pressure-style grappling to advance position or attack a submission. Am I stalling if I am aggressively trying to kneeslide out of half guard into side control but there isn’t much movement? Am I stalling if I’ve mounted my opponent, and I’m waiting for them to expose an arm? Am I stalling if I’ve just grappled three guys in a row and slow down my pace a bit to rest? QUINTET has no issue taking away someone’s position if they aren’t deemed active enough. And that’s okay, but they need to better define what stalling is and what it isn’t. Sometimes slow, pressure grappling IS entertaining. And QUINTET just wants to be entertaining.

QUINTET was seriously amazing as a fan of grappling and of combat sports. The world is talking, and I cannot wait to see what’s to come from the promotion. QUINTET returns in December with QUINTET 4 in London. Watch live on UFC FIGHT PASS.