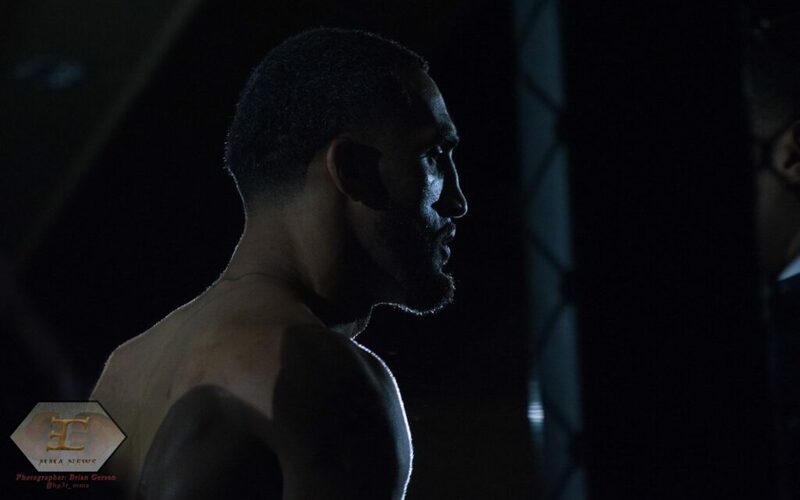 In a matter of days, Alex Ortiz will attempt to seize the biggest opportunity of his mixed martial arts career. The Connecticut fighter competes on Friday’s Bellator 207 in Uncasville, CT at Mohegan Sun Resort and Casino.

The armed forces veteran makes his promotional debut Friday. In the mind of Ortiz, the opportunity to compete on the sports highest level is a long time coming. It also isn’t the first time he was approached by Bellator officials. Matchmakers kept an eye on Ortiz.

“They offered me a fight before, I’ve had to turn them down a couple times due to life kind of being in the way. But this time I knew that it was adamant to take the opportunity and make the most of it. There’s only so many chances you get before they skip [past] you. So the emotions were real on this one. I’ve dreamed of this for a long time and to finally have it coming to reality is huge for me. It only vindicates what I’ve always felt about myself and that’s I am a very good talent. That I can go out there and perform at a high level.”

Despite the interest in Ortiz continually appearing from Bellator, the opportunity in front of him is deeply important.

“I really feel like it could be life-changing. I’ve put a lot of energy into this camp, knowing that if I can go out there and put on a solid performance, show that I can draw a crowd [that] it could possibly lead to a multi-fight contract. Obviously, I am not putting all my eggs in one basket. I’m prepared for any outcome. If it doesn’t happen I’m ready to go and continue fighting for other organizations but I really feel like this could be the one that changes everything for. If it doesn’t, then so be it. But I am still working towards that ultimate goal of forgetting the normal life and really dedicating myself to this for as long as I can. If it does come to fruition where they do offer me a multi-fight contract, then that’ll be almost a dream come true.”

Life isn’t easy for fighters in the regional scene. On top of working full-time jobs, like Ortiz, a massive burden is put upon family and friends. In the case of Ortiz; family is of the utmost importance. The countless hours he spent away from home, his wife, and son, Max took an emotional toll. Especially under the circumstances.

Ortiz and his wife, Jessica Ortiz, are expecting a second child. Yet, before the second bundle of headache-inducing joy arrives a crisis struck two other family members of the Ortiz clan. The two dogs of the family, Leo and Titan, contracted hepatitis. Titan received the worst of it, as his health was in poor condition over a week ago. Luckily, the health of both animals improved but the ordeal did strike sadness and fear in the Ortiz family.

“It hasn’t been easy. But that doesn’t matter when it comes to the fight. To me, it’s only more motivation to make this happen. Dealing with it every day can be tough because it’s there, it’s raw, it’s real. My wife means everything to me, my son means everything to me, and my dogs mean everything to me but seeing how my team rallies behind me, it gives me that extra push that things will work out regardless. I think being in that cage is going to allow me to vent that out. I’ve always been an emotional person, it’s nothing new to me. A lot of people say that can actually hold you back when you fight with emotion. But I’m the only boy out of five kids and I’ve always been a defender in a sense.

I’ve always had to protect my sisters or anyone in my family and just being able to release that emotion is like an escape for me. I get to go in that cage and just forget about it all for a moment and live. That’s my time to live, in that cage. I plan on going out there and releasing everything, all this emotion, all the expectations. All the ups and downs are going to culminate in this one moment. It’s a drive a for me. I don’t allow it to depress me or give me too much anxiety, it’s almost like its building that urge in me to be more successful. Because I know if I can be more successful I can provide better and do better for my family. All this is almost like the storm before the rainbow and I’m not afraid to dance in the rain.”

At Bellator 207, Ortiz takes on Nick Giulietti during the preliminary card. Much like Ortiz, Giulietti is a respected amateur in the New England region. Across the board, many aspects of the two competitors amateur careers line up. Both held amateur titles and multiple stoppage finishes. By all means, it is a potential ‘Fight of the Night’ contender.

“I think it’s a really good matchup. It’s probably going to be my toughest fight. I’ve studied Nick [Guilletti] a little bit, I’ve watched some of his fights. I’m a little aware of what he’s capable of but who knows how much he’s grown in the time frame from his last fight to now. So I’m coming in almost (like) a cup of water. I’m just ready to see where it flows. I expect him to have a game plan and stick to it. He’s a smart fighter but I’ve said it previously, I am going to be his toughest opponent without a doubt. I am ready to bring it to him. I know he’s going to be well prepared we’re going to put on a good show for the crowd.”