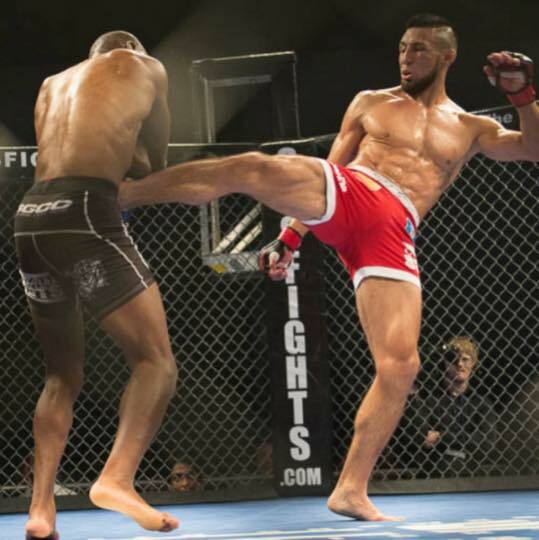 The main event featured two up and coming prospects in the bantamweight division. 13 – 4 Ray Rodriguez took on the heavily favored 12 – 2 Chris “El Guapo” Gutierrez. The “Judge” Ray Rodriguez looked dominant in his last performances with an impressive 8-fight winning streak going into the bout. This, however, did not phase “El Guapo” as it only took him 4:47 seconds of the very first round to submit the Brazilian Jiu-Jitsu black belt with slick rear-naked choke. Everyone took notice of “El Guapo’s performance.

It did not take long for the UFC to contact Chris’ manager and have him make his debut, 6 weeks later. The Ultimate Fighter 28 takes place at The Pearl at the Palms Arena in Las Vegas, Nevada. The main event features prosperous welterweights Kamaru Usman versus Rafael Dos Anjos in a contender eliminator fight. This is also the night that Chris Gutierrez will make his awaited debut into the 8-sided octagon and demonstrate what “El Guapo” is capable of.

MMASucka exclusively was able to get the bantamweight in a 50 minute-long segment feature on The Complete Knockout Podcast. There, he talks about his upcoming debut, his last performance and his personal battles outside of professional mixed martial arts. You can catch him competing in his upcoming battle with wrestler turned knockout artist Raoni Barcelos, at the Pearl at the Palms Arena, November 30th.

Stay tuned right here at MMA Sucka for more live streams as well as videos highlighting the top fighters, commentators, coaches, promoters and other names in MMA and combat sports. We also bring you great offers on the latest MMA products and merchandise. Make sure to subscribe to the TCKO YouTube Channel for more MMASucka Powered Interviews!