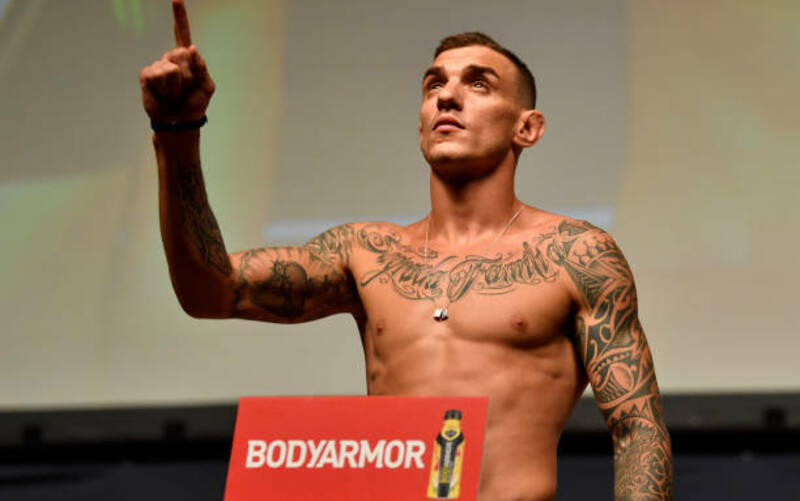 Max Holloway just extended his UFC winning streak to 13 against the highly talented Brian Ortega. Max answered many questions on Saturday night, including the most important one of them all—’Is Max Holloway still able to compete?’ Despite his recent scary and unexplained cognitive ailment, the answer was a resounding yes. But now a new question is looming:

Should Max Holloway move up to 155 pounds?

Should Max Holloway move up to 155 pounds? Dana White sure seems to think so. During the post-fight press conference for UFC 231, Dana White had the following to say:

“Honestly, listen, Max is a grown man and we need to talk, but I’d like to see Max go to 55 now. I think that, you know, the guy’s 27 and going on 28 years old. He’s in the prime of his life. Never looked better. Continues to improve with every single fight that he’s in. And I think he’s done everything he can do at 45. Why keep cutting that weight? And I think there’s some big things for him at 55.”

Brian Ortega was looked upon as the biggest possible threat to Max’s featherweight title. And while ‘T-City’ had his moments in the fight, ‘Blessed’ competed astoundingly well. So, what would be left for Max if he stayed at 145 pounds?

Before I go into details about what options I believe are available for Max at featherweight, I want to make something abundantly clear. If the cut to 145 pounds is of severe detriment to Max’s health, I would implore him to move up to 155 pounds. However, Max stated that the cut for his most recent fight went extremely well. If we are to take him at his word, there are options at featherweight that merit exploration.

The first possible challenger is number 4 ranked Renato Moicano. Renato is 13-1-1 as a professional and 5-1 in the UFC. His lone defeat was a submission loss to the likes of Brian Ortega. Though it didn’t matter in the end, some feel Renato was winning the bout up until the 3rd round submission.

Since the loss, Moicano has won back-to-back fights. He is currently coming off the biggest win of his career– a submission victory against Cub Swanson. And though Renato recently missed weight as an alternate for the UFC 231 main event, I suspect they’ll choose him to face Max next, if the champ decides to stick around.

If Renato isn’t next, surely number 3 ranked Frankie Edgar is. Frankie is a former lightweight champion, he’s currently ranked above Renato Moicano, and Max Holloway is one of the few featherweights he hasn’t fought.

Stylistically, it’s also an interesting match-up. Edgar is a competitor who could arguably match Max’s pace in the octagon. And with all the talk of Max moving up to face Khabib Nurmagomedov, wouldn’t it be nice for him to defend his belt against one of the top wrestlers in his division?

Even more interesting is the story line that would come along with this fight. As you may recall, Frankie Edgar is the man who ended BJ Penn’s reign as the UFC lightweight champion. He also swept BJ Penn in the trilogy that would ensue. BJ Penn is a legend in MMA, but he’s a hero in Hawaii. With Penn far past his prime, one could make the argument that Max Holloway is the new BJ Penn.

Imagine if the UFC went to Hawaii for the first time and booked Max Holloway against Frankie Edgar as the headliner. Frankie would be coming to take the belt from another great Hawaiian champion, and Max would be defending his honor on behalf of the Aloha state. That is the kind of match-up you bring to Hawaii. And that is the kind of story that could fill a stadium.

Speaking of talented wrestlers, let’s not forget that Chad Mendes just came back and starched Myles Jury. Since winning, Chad made a splash in the rankings, landing at number 5. Chad has fought Jose Aldo twice for the featherweight belt. While he never had his hand raised, he gave Aldo all he could handle in what some consider to be the greatest featherweight title fight in UFC history. If Chad is able to get past Alexander Volkanovski at UFC 232, the UFC should begin to reconsider where he fits in the current title picture.

Potential Opponents Down The Line

If Max fought and defeated Chad, Frankie, and Renato, he will have cleaned out his divisions current top 5. One might argue he cleaned out the entire division, and if there were no prospects, they would be correct. Fortunately, there are prospects rapidly evolving at featherweight. Zabit Magomedsharipov and Yair Rodriguez are prime examples of competitors who are almost assuredly receiving title shots if they continue on their current career trajectory.