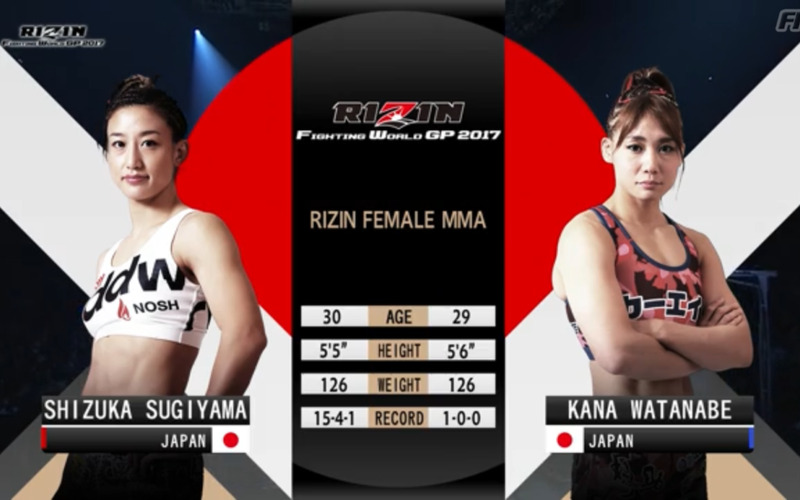 At ‘RIZIN: Yarennoka!’ later this month, we will see a women’s flyweight rematch between Kana Watanabe and Shizuka Sugiyama.

Ahead of the NYE rematch, however, what better time than now to look back at Kana Watanabe vs. Shizuka Sugiyama 1? It was only a year ago, so it is still relatively fresh, but for those unfamiliar with the first meeting, we got you covered.

Check out a breakdown of their first clash below, GIFs included. And while you’re at it, take a look at the previous RIZIN Retrospectives done before rematches occurred inside the RIZIN ring. 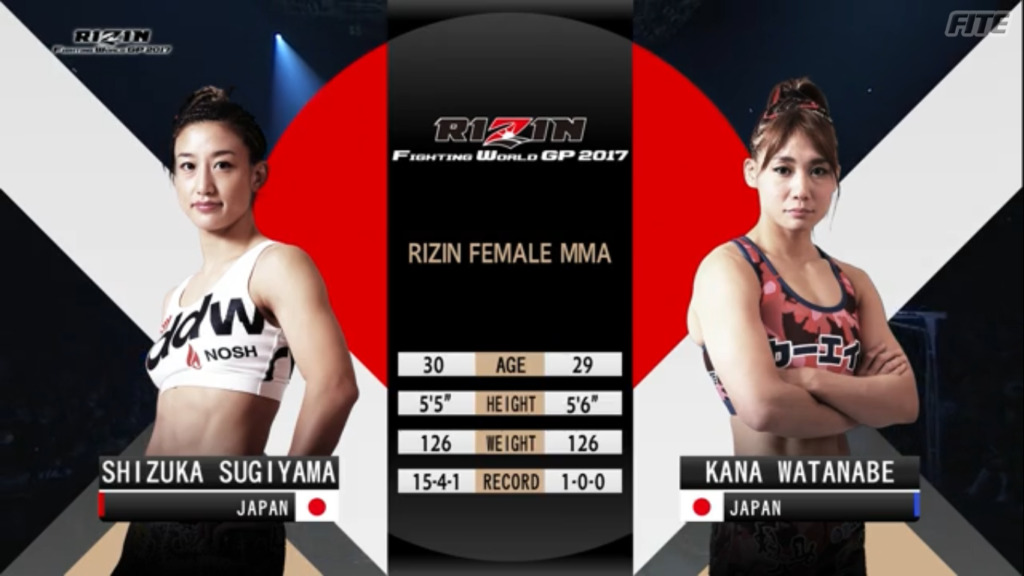 Entering the arena first was stellar judo player Kana Watanabe of Fighter’s Flow gym. She entered the night with just one professional fight and win opposite Sugiyama’s twenty bouts.

Her primary weapon was without question her grappling, winning her first fight with ease via armlock, but she also has some pronounced power in her striking as well. On commentary, they note how, despite being young in her career, Watanabe truly has all the makings of a star in Japan after the win over Hikari Sato at DEEP JEWELS 18 earlier in the month.

Opposite Watanabe was the wife of fan-favorite Japanese fighter “K-Taro” Keita Nakamura, the karateka “Shiyan” Shizuka Sugiyama of Reversal Gym Shinjuku Me came into the night as a veteran of the famed DEEP JEWELS promotion but this would be only her third fight in nearly four years due to taking a break from MMA in 2014.

Sugiyama began her career in 2008 well-versed in karate but has since become a very decent grappler. Which was needed ahead of a fight with Watanabe, a very prominent judoka. The bout ahead was dubbed “New Star vs. Pioneer,” with Watanabe being the new star, and Sugiyama taking the role of a pioneer with a 15-4-1 record. Heading into the contest with eight finishes, Sugiyama had finished seven opponents in the opening round.

Now, onto the fight.

It was the experience of Sugiyama against the potential of Watanabe, and right out of the gate we see Sugiyama looking to keep her distance prepared to counter-attack when the vicious judoka inevitably tries to close in on her. Funnily enough, it’s Watanabe who lands the first big shot of the bout, catching “Shiyan” with a clean straight-right one minute into the opener.

Eventually, Watanabe wades in to clinch up, and as Sugiyama tries to back away she gets hit with a beautifully sneaky footsweep. This allows Watanabe to close the distance and finally grab a hold of Sugiyama, but she’s able to defend and keep the fight standing after some rope fighting.

Sugiyama defends the initial takedown well, even connecting on a nice straight punch on the break, but as she throws a kick at Watanabe, it’s caught. Despite having her leg in the hands of Watanabe, Sugiyama continues to throw punches and still defends the takedown. Upon getting back in striking range, Kana Watanabe begins showing a heavy reliance on the straight-right, the same punch she caught Sugiyama with early on, but now it’s becoming very obvious.

With 90-seconds remaining in round one, Sugiyama closes the distance much to her detriment. As finally, Watanabe gets Sugiyama to the mat courtesy of a nice throw and immediately takes her back in search of a choke.

In spite of the dangerous position, Shizuka Sugiyama fights off the choke attempt and gets back to her feet relatively quickly. As they get back into a standing position, the remain clinched, but shockingly it is Sugiyama looking to toss Watanabe to the mat this time. Not creating her distance like one would assume she should and would be doing.

Sugiyama tried, but Watanabe’s judo is too good for her to get even remotely close to being taken down. The round ends with them in striking range throwing a few kicks and punches.

In the opening seconds of round two, we see Sugiyama working leg feints before landing a nice leg kick on Watanabe. This is followed up by a nice body kick from the undefeated judoka that is caught by Sugiyama. Despite having her leg caught, Watanabe somehow manages to just seconds later use that same leg to get a trip takedown.

It seems as though Kana Watanabe has a dominant position with plenty of time to work, but it takes no time at all for Sugiyama to hit the switch reversal and get a top position of her own in very impressive fashion.

Sugiyama maintains this top position for the better part of two minutes, despite Watanabe’s best efforts to roll out of it. Eventually, a scramble leads to Shizuka Sugiyama nearly getting a Gary Goodridge-esque back crucifix. As Watanabe looks to reverse this and get the top position back, Sugiyama executes a nice whizzer to avoid being beneath the stellar judoka. The stalemate forces the fight back to a standing position.

The judo fighter gets a dominant clinch position on the feet, fighting to get below Sugiyama’s hips for a throw. But again, very good defense from the veteran. As Sugiyama breaks free, she begins to loosen up with her striking. Throwing combos that end with a kick numerous times. Watanabe catches one of these and secures a short-lived takedown.

In the final minute of round two, we see Sugiyama attack the body of Watanabe with clinch knees to the body, kicks to the body, and 1-2 combinations. The round ends with Shizuka Watanabe connecting cleanly on two right hooks.

Both are very visibly tired heading into round three. But, despite the takedowns, Shizuka Sugiyama seems to be winning this fight by a narrow margin. She also appears to be the more fresh fighter heading into the final frame.

Immediately we see Kana Watanabe rush Sugiyama to push her against the ropes. Doing so, she gets into a great position for a throw and does exactly that, tossing Sugiyama to the mat head first. An odd scramble results in Watanabe eventually getting into a heavy mount position.

From here, the judoka simply smothers her. Sugiyama does her best to scramble out of the position, but Watanabe’s hips are too heavy. After over three minutes of control, Watanabe finally postures up with punches before attacked with a very dangerous looking armbar.

The armbar was locked in for a decent amount of time, but Sugiyama defended excellently. Getting back to her feet as the armbar is still applied, Shizuka Sugiyama begins to hammer Kana Watanabe with head stomps and soccer kicks. This eventually forces her to break the hold.

However, the round comes to an end still with Watanabe in the armbar position, just not quite cranking on it. So Sugiyama was safe from having her arm snapped, but that was a very dominant round for the judoka. After two close opening rounds, it was clear Kana Watanabe would be crowned the victor based on a fantastic round three. She was.

In her second pro fight, Kana Watanabe defeats a twenty-fight veteran in the form of Shizuka Sugiyama. But it wasn’t easy.

Three months after winning her RIZIN debut, Watanabe returned to DEEP JEWELS and took on Yukari Nabe. It was a competitive affair that, ultimately, ended in a draw, despite it seeming as though Watanabe was the winner.

Another three months had passed, and Kana Watanabe took on Yukari Nabe in a rematch at DEEP JEWELS 20. The bout once again went to the judges, but Watanabe refused to leave room for doubt and won a very comfortable majority decision.

Back in August at DEEP 85, the judo specialist made easy work of Asami Nakai by way of first-round armbar. Prior to her first meeting with Shizuka Sugiyama, it was said on commentary that Watanabe carries many traits that could see her become a big star if she made it to 5-0.

Well, on December 31, she faces a familiar foe for a chance at becoming 5-0.

Whereas Watanabe has remained active since their last meeting, the same can’t be said for Sugiyama. She returned six months later, also under the DEEP JEWELS banner, and dominated Sachiko Fujimori en route to a unanimous decision win.

This was on the same card as Watanabe’s victory over Nabe. And that was no coincidence, as DEEP was looking at setting up this rematch between the two under their umbrella. But, ultimately, but women figured it’d be fitting to settle the score in RIZIN on NYE.

See the rematch at ‘RIZIN: Yarennoka!’ live from Japan on December 31 ahead of the stacked RIZIN 14.