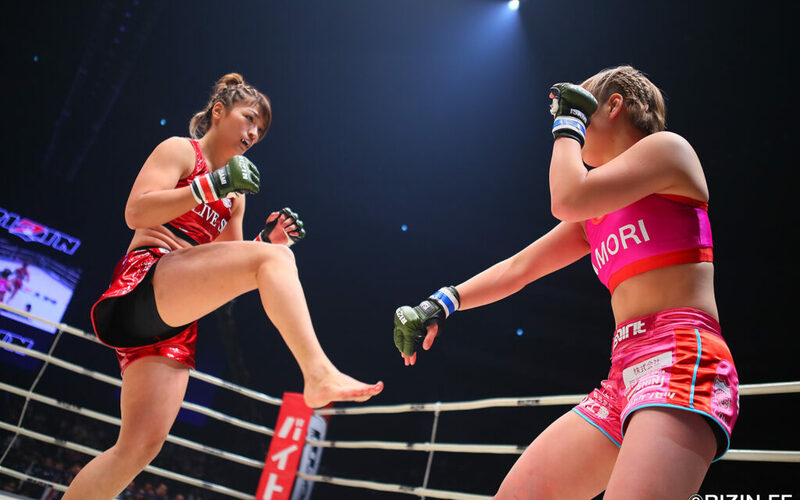 At RIZIN 11, we will see an atomweight match-up between two of Japan’s finest in the form of Rena Kubota and Kanna Asakura. In a fight that has real, legitimate title implications despite no title being on the line as originally anticipated.

Ahead of their rematch in just a few weeks, let’s take a look back at their first meeting that took place seven months ago. They met in the finals of a long and interesting RIZIN Super Atomweight Grand-Prix, with each woman fighting two times the night of their initial meeting.

Kanna came in the underdog against RENA, but before we get into their meeting, check out the previous Retrospective piece on Horiguchi vs. Ogikubo 1 ahead of their rematch at RIZIN 11 as well!

Before getting into the fight itself, let’s look at the road each lady had to take in order to get there. After all, it was the finals of an eight-woman grand-prix.

Before heading into the finals at the young age of 20, Kanna Asakura had to actually win a fight in DEEP JEWELS to earn her way into the tournament. She fought 25-fight veteran Saori Ishioka at DEEP JEWELS 17 in late August of last year, this bout would determine who would compete in the upcoming RIZIN Grand-Prix.

After a very hard-fought fifteen minutes, Asakura was declared the victor, improving her record to 8-2, and earning a spot in the Grand-Prix. In October, during the quarter-finals, she took on Polish striker Sylwia Juśkiewicz. Asakura managed to use her stellar grappling to dominate her opponent.

This allowed both of them to move on to December 31, the night in which the tournament would conclude. With both the semi-finals and finals taking place on the same night.

Kanna Asakura was given another tough striker. A Brazilian dubbed “the female Anderson Silva” by some. This was Maria Oliveira. The 20-year-old Japanese darkhorse was able to secure an armbar in round two for the tap, earning her spot in the finals later on that night.

RENA advanced to the finals with another vicious KO, only this time against lanky Spanish fighter Irene Cabello.

This meant Rena Kubota and Kanna Asakura would fight in the finals. It was a battle of friends as RENA put her 6-0 record on the line against Asakura’s 10-2.

If you’re looking for a more detailed recap of the women’s atomweight grand-prix, we’ve got you covered! Click here.

As previously mentioned, the always overlooked Kanna Asakura entered the fight with a very respectable 10-2 record. At just 20-years-old, the sky is the limit for her as she enters the biggest fight of her career against someone she considers a dear friend, Rena Kubota.

Throughout her very young career, she has showcased incredibly sound wrestling fundamentals and overall a quite good grappling game. With six wins coming by way of decision, and four coming via submission.

Opposite her is an undefeated 26-year-old finisher, primarily known for her outstanding shootboxing skills. She has shown vicious flurries that result in the knockout, devastating liver shot knockouts, and even flying armbars.

Entering the contest, the two do not share any common opponents. But, in terms of mixed martial arts, Asakura has the better resume. With her biggest win up until this point being over the likes of Saori Ishioka, as opposed to RENA’s arguably biggest win in the form of Andy Nguyen.

This bout is, in many ways, a striker vs. grappler match-up. But it also might not be entirely fair to consider it that way, as both girls have proven that they’re not completely inept in the one area the other specializes in.

The grappler, Kanna, enters the fight as a southpaw opposite the striker’s classic orthodox stance. RENA is throwing multiple leg feints early, and also switching stances fairly regularly, as she can successfully strike from both.

It takes about a minute for either fighter to really mount any offense, and it’s Kanna Asakura who does so. Securing the takedown on RENA with a nice double-leg from range. She completes it, but RENA fights hard to get back to a standing position.

As they stand back up, we see lots of lateral movement from Kanna Asakura. Very smart of her considering that RENA enjoys walking people down and teeing off on them when their back is against the ropes. Look no further than the Irene Cabello fight earlier in the night!

It takes RENA about two minutes to land her first real, successful strike of the fight. And it comes in the form of a nice left jab that snaps the head of Asakura back. It is followed up by a nice inside leg kick from Kanna moments later.

Shortly after, Asakura attempts her second takedown of the fight but it’s easily avoided by RENA who proceeds to go on the offense. She gets the fight where she wants it, in the corner, but her attempt to trap Asakura is stifled quickly when Asakura circles out and instead put the pressure on RENA. This ultimately resulted in another unsuccessful takedown attempt from Kanna.

With about 90-seconds remaining in the opening round, RENA finally managed to land one of her signature kicks, going to the body with a nice kick from the right side.

Kanna followed this up with another hard-fought takedown. This was the demise of RENA.

This is where Kanna Asakura is at her best, and she ended up right in side control. RENA did her best to fight out of the position, but in the process, she gave up her back. This is a place you do not, under any circumstance, want to be when facing Kanna Asakura.

RENA attempted to buck Asakura off, even appeared to be trying to get back to her feet with Asakura on her back. But it was here where Kanna was able to get underneath the neck to lock in the rear-naked choke.

RENA refused to tap out, and Kanna Asakura put her to sleep. That was the end of the fight! The tournament darkhorse puts the tournament favorite to sleep.

Kanna Asakura picks up arguably the biggest win of her career, and certainly the most important. She does so in devastating fashion and wasted no time in checking on an unconscious RENA after the referee separated the two.

Following her incredible Grand-Prix win, Asakura didn’t waste much time before getting back in the ring. As she returned at the next RIZIN show in May; RIZIN 10.

On this card she thoroughly dominated Canada’s Melissa Karagianis, a former King of the Cage Champion, having defeated Andy Nguyen. After her win, Kanna’s celebration was ‘interrupted’ by none other than Rena Kubota.

She came into the ring to request a rematch with Kanna. And, Asakura was on board, but she felt like RENA had to earn at least one win beforehand, as she had not competed since her loss to Asakura.

As mentioned above, RENA hit the ring following Asakura’s win over Karagianis. And despite Kanna’s relatively fair insistence that RENA take one fight before a rematch, RIZIN booked the two in a rematch for RIZIN 11 a few weeks later.

However, Asakura’s request for RENA to fight once first was granted. After booking the rematch, RENA scheduled a fight under the Shootboxing organization. This took place just this past weekend, so only a few weeks out from the big rematch.

Rena Kubota faced a Brazilian grappler in the form of Elain “Pantera” Leal. She managed to defend a handful of dangerous submission attempts and outstrike her opponent en route to a unanimous decision win. We even saw some nasty soccer kicks from the Japanese sensation!

The two will meet for a second time in just a few weeks at RIZIN 11 on July 29, live from the Saitama Super Arena.

Be sure to watch their first meeting in its entirety here, courtesy of Fite TV.