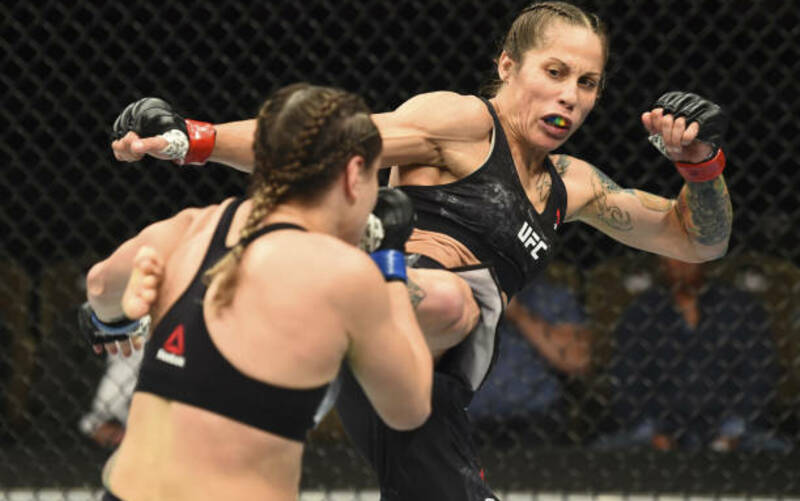 Over the last several years, Women’s MMA (WMMA) has become quite popular with casual and hardcore fans alike. One of those pioneers of WMMA is the Louisiana-born Liz Carmouche. Carmouche has had a career resurgence at flyweight after a successful run at bantamweight in Strikeforce, Invicta FC, and currently the UFC. With nearly 10 years of professional fights behind her, Carmouche is ready for her biggest year to date.

Early Days and Growing Up Overseas

Carmouche was born in the great combat state Louisiana. The city of Lafayette is home to many former and current UFC stars such as Dustin Poirier, Daniel Cormier, Alan Jouban, and Tim Credeur with Carmouche only adding to the city’s star power output. Though born in Lafayette, Carmouche grew up overseas in Okinawa, Japan. She grew up in a military home, a career she would later take on before committing to MMA full time. “Okinawa was wonderful. The hardest part was having military friends that moved,” Carmouche told MMA Sucka. “I love the Okinawan culture and the island itself. I always lived five minutes from the ocean and could head down to the beautiful beach regularly.”

MMA came into Carmouche’s life later than most top-tier talents. “I participated in Karate when I was a kid, but it was very brief. I didn’t really get into MMA until I departed the Marine Corps in 2010,” Carmouche said to MMA Sucka. She added, “I was hooked on it from the first day I stepped foot in the gym.”

As with any successful fighter, you need solid, influential leaders, and that’s exactly what Carmouche found in San Diego, California. “I credit Manolo Hernandez and Bill Crawford for giving me the opportunity in fighting and believing in me when I didn’t even believe in myself,” Carmouche stated. The trio currently coach at San Diego Combat Academy in San Diego, CA. SDCA was recently named the 2018 10th Planet School of the year for the fourth year in a row. Hernandez is often seen in the corner of other top tier women’s fighters such as Bellator flyweight champion Ilima-Lei MacFarlane and Pearl Gonzalez who is set to compete for the Invicta FC women’s flyweight title at Invicta FC 34 in February 2019.

Hernandez had nothing but amazing things to say about Carmouche. “The moment I met Liz I knew she was special. She’s one of the most special athletes and people I have ever met,” Hernandez told MMA Sucka. “She set the standard for what works has to be on our team. She is the hardest worker I have ever met. Liz turned pro after only six months training and has been in the top 10 since that first year. First ever woman to step in the cage to fight in the UFC and fought in the first UFC fight in New York and won! An amazing athlete, friend, and mother.”

Invicta FC 1: Coenen vs. Ruyssen took place on April 28, 2012, where Carmouche won via first round knockout against Ashleigh Curry serving under headliner Coenen and future UFC strawweight Jessica Penne. Carmouche competed again under the Invicta FC banner for Invicta FC 2: Baszler vs. McMann winning again by finish, this time by second-round rear naked choke against Kaitlin Young. Her impressive showings under Strikeforce and Invicta FC earned her the honor of competing in the most influential bout in women’s MMA history.

The Turning Point for Women in the World of MMA

The turning point for women’s MMA, without a doubt, was UFC 157. The main event between Carmouche and Ronda Rousey on February 23, 2013. After famously being asked when women would compete in the UFC and UFC president Dana White replied, “Never,” The first women’s bout was set to take place on MMA’s biggest stage as well as being named the main event. The bout also would name the first ever UFC women’s bantamweight champion. Carmouche looked impressive early in the bout getting the back of the perceived invincible Rousey about one minute into the bout. The choke was locked in tight before Rousey was able to shake free. With less than 15 seconds to go, Rousey locked in an armbar to claim victory. Prior to Rousey’s loss to Holly Holm at UFC 193, almost three years later, Carmouche put Rousey in the most trouble she had ever encountered.

“I did not think that fighting Ronda would become what it has in history and MMA,” Carmouche told MMA Sucka. “Even looking back I’m always surprised at the role it’s played in women’s MMA.” Over 13,000 packed the Honda Center in Anaheim, California for the monumental event. Carmouche continued on in the bantamweight division over the next few years battling the best the division had to offer. Her history-making moments continued has she competed in the first bout after New York legalized MMA at UFC 205 on November 12, 2016, where she won against Katlyn Chookagian.

Fortunately, we are becoming more receptive of some beliefs in our society. Sexuality, in general, is one of those categories. Carmouche has been openly gay. “My sexual preference has never resulted in confrontation. It’s my understanding that I’ve missed out on sponsors or fights because of it,” Carmouche told MMA Sucka. “I have a management team that wanted me to pretend to be straight and be more feminine. Some fans have also voiced disgust at my openness.” As we have seen in many sports, it seems to be an easier top for female athletes to bring to light over that of male athletes. Will males eventually bring openness to sexuality to light? “I think males will open up but it will be a slow process,” Carmouche stated.

In an article put out by BBC in May 2018, former UFC fighter Dan Hardy stated on the topic,  “Obviously, you’re going to get the occasional person who is going to be difficult or insecure about their feelings towards somebody else’s sexuality, but I think, for the most part, they would be celebrated and respected, for openly owning their sexuality in a very masculine environment.”

The Future at Flyweight for Liz Carmouche

Following a slow down in competition in 2016 and 2017, Carmouche started a new chapter in her career moving to the newly created flyweight division. In July 2018 Carmouche battled Jennifer Maia at UFC Fight Night 133 where she won via unanimous decision. Next up for Carmouche is Lucie Pudilova at UFC on ESPN+ 3 on February 23, 2019. The Czech fighter, Pudilova, will be making her fifth UFC appearance where she is currently 2-2. This rebirth could be what Carmouche needs to add UFC gold to her resume.

“I do plan on asking to be in title contention. Unfortunately, I’m at the discretion of the UFC,” Carmouche stated. I’ve tried to make plans to fight as frequently as possible but it’s not up to me. I would really like to fight three times this year though.” Hopefully, we will see Carmouche eventually earn that title shot and eventually obtain UFC gold.