Maycee Barber: Staring into ‘The Future’ 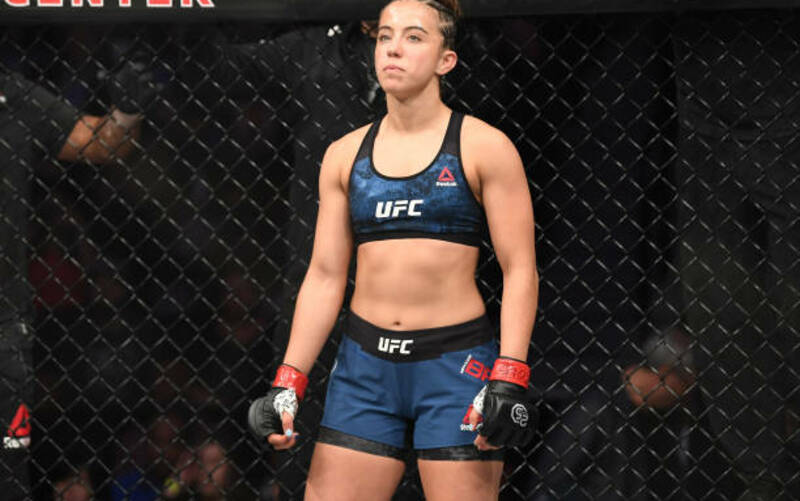 Maycee ‘The Future’ Barber is the latest sensation to storm onto the UFC scene and is determined to succeed. At just 20 years-old, Barber already has an impressive 6-0 MMA record, including five finishes.

Maycee Barber’s path to the UFC

After her first four fights under the LFA banner, Barber earned a contract on Season 2 of Dana White’s Tuesday Night Contender Series. She cruised to a dominant victory over Jamie Colleen, finishing her in the third round.

Barber made her official UFC debut at UFC Fight Night 139, picking up the victory over Hannah Cifers. The young phenom controlled the fight in the clinch, showing off an array of strikes. She finished with savage ground and pound in the second round. Check out a full analysis of that victory here.

Barber’s family opened ‘Fort Collins Martial Arts Academy’, their own martial arts school, in 2010. She originally started competing in jiu jitsu tournaments and made her amateur MMA debut at the age of just 18. She finished this fight in only 20 seconds, dropping her opponent with a straight left.

Barber turned pro immediately following the victory. Having started karate at age three and a earning a second-degree black belt, Barber has solid credentials on her feet. She’s no slouch on the floor either – training under the legendary Rener and Ryron Gracie, Barber has also received her purple belt in BJJ.

What’s next for Barber?

Having debuted at strawweight, Barber put the whole division on notice. However, her next fight will be at flyweight, matched up against JJ Aldrich at UFC on ESPN+6 in Nashville. Having worked with specialists at the UFC PI after her last bout, Barber decided to move up to 125.

She walks around at 130-135, and shown by her history of missing weight badly, making 115 has always been a struggle for Barber. She missed weight for her UFC debut by a half-pound, using the additional hour allowed and made 116lbs. Barber told MMA Junkie she feels ‘way better’ at 125, and now has the opportunity to become a real contender in the somewhat shallow division.

Aldrich however, is no joke, riding a three-fight win streak, and having been on Team Joanna on TUF 23. Aldrich’s credentials are as solid as Barber’s too, boasting a third-degree black belt in taekwondo and a brown belt in BJJ. Training day in and day out with the 115 champ Rose Namajunas means Aldrich clearly has solid training partners.

Despite her move up in weight, ‘The Future’ still has the same goal – to become the youngest ever UFC champion. The record is currently held by Jon Jones, who captured the light-heavyweight title at age just 23 and is set to defend the belt at UFC 235. She describes this goal as one which consumes her life, and that she wants to ‘crush’ Jones’ record. At just 20 years old, with the record within her sights, she’ll be looking to put on another impressive performance in Nashville.

If Barber is successful in her second UFC outing, she may call out ADCC champion Mackenzie Dern again. Barber claimed before her debut that Dern ducked her when both women were fighting under the LFA banner. Currently ranked #15 in the strawweight division, Dern is also undefeated in her MMA career. Could we see a match-up between two undefeated prospects in the future?

Tune in to UFC on ESPN +6 on March 23rd to see Barber face off against Aldrich. The card is headlined by Stephen ‘Wonderboy’ Thompson and Anthony Pettis.