As promised we are back in black this week with another DraftKings dream team. Again I apologize for straight up skipping last week, but I simply couldn’t put a lineup I had any degree of confidence in together for that card. Not the case this week for UFC 235. This card is loaded top to bottom and there’s potential for upsets all over the place. I’ll also be completely honest and say this week I’m going for broke. So if you’re playing cash games only I’d consider making some adjustments. It’s the biggest card of the year thus far so I’m constructing a DraftKings dream team to take home the biggest prize of the year thus far.

If you’ve been following along with my lineups you know I generally at least attempt to not jump right to the highest priced option on the board. For starters, everyone typically owns them. Secondly, I just feel a bit phony if your advice is “just take the monster favorite” too often. It’s like betting the “fight will not be a draw” prop and acting as though your some sort of touting savant. That said, given some of the selections I have down the roster I wanted at least one sure thing and Jon Jones is that sure thing. There is literally nothing skill-wise Anthony Smith does better than Jon Jones. Nothing.

This fight will end precisely when Jones wants it to. Which will be right around the same time Jones attempts a takedown. Better fighters than Anthony Smith have tried to survive a Jon Jones ground and pound onslaught and failed. This will be no different. I just hope for the sake of justifying spending $9,600 here Jones wants to make a quick outing of the night. Rest assured though, as sure as I am of the sky remaining blue and the sun rising tomorrow this fight will end inside the distance and Jon Jones will be the one getting his hand raised.

Another steep price tag, but one well worth it. Magomedsharipov is all offense all the time. Jeremy Stephens, if anything, is a durable SOB. Outside of getting his liver caved in by Jose Aldo he hasn’t been finished in over six years. The guy is built to take punishment and Magomedsharipov is built to dish it out. The other thing that makes Magomedsharipov such an attractive play is the variety of his attack. He’s going to throw strikes, he’s going to wrestle, maybe pass guard, throw up subs, the works. I think we can all agree he’s going to win the fight so it’s really just a matter of him putting Stephens away early (unlikely) or piling up points for 15 minutes (quite likely). Either outcome is beneficial to a DraftKings lineup.

Middle Of The Pack

Depending on how chins hold up this very well could be the fight of the night. Pedro Munhoz is not one to back out of a gunfight regardless of how hittable he may be at times and unless Garbrandt has completely retooled his game (spoiler alert: he hasn’t) he’s going to be looking for the knockout. So why Garbrandt instead of Munhoz? It really comes down to the fact that I think people are sleeping on “No Love” right now. I don’t expect him to be very highly owned. His fights with TJ Dillashaw have definitely not left us with any great recent memories of him in the cage. But I implore everyone to remember what he did to Dominick Cruz. That guy is still in there somewhere and Munhoz is going to give him exactly the type of fight he wants to prove it.

For as much as his offensive wrestling is absent Garbrandt remains a stellar defensive wrestler. So you have to imagine this will play out on the feet where Garbrandt wants it. All he has to do is find his spot and close the show with that KO power he showed on his way up the ranks.

I’m not sure if $7,800 technically qualifies as a “budget buy” but it’s going to today. Now, I know I got burned going against Johnny Walker mere weeks ago but you know what they say – second time is the charm. I trust Misha Cirkunov to be far more competent at avoiding a wild opening salvo than flat earther Justin Ledet.

To be honest, I don’t think the short turnaround time for Walker helps or hurts Cirkunov here. Whether these two have four months or four minutes notice this fight is going to be chaos for all three minutes that it lasts.

Given MMA’s general affinity for recency bias, people will still be sipping the Johnny Walker kool-aid. Which means there’s going to be the potential for a huge point swing if Cirkunov can secure an early takedown and wrap up a rear-naked choke. Remember, we are going for the big time prizes here which is why we are going for Cirkunov.

Full disclosure, it pains me to have Usman on this list. Not because I have a personal vendetta against the guy. That said there is definitely a world in which this fight looks like a less punishing version of Usman’s fight with Rafael Dos Anjos. No, Usman isn’t going to crack Tyron Woodley‘s bulletproof takedown defense in every round. But it’s no secret Woodley routinely backs himself into the fence. If Usman can tie him up there without eating the hammer of Thor that is Woodley’s right hand we very well could see 25 minutes of Usman piling up clinch strikes. It won’t be pretty, but Usman has one of if not the deepest gas tanks at 170. He can definitely push a pace that will make such a strategy valuable in a DraftKings setting.

You didn’t think I was going to preface this as a, ‘go for broke lineup’ and not include Robbie Lawler, did you? Of course, you didn’t, you’re an intelligent person. Which is why if you’re looking to go against the majority on a play that could go nuclear you’re getting Lawler on your squad. I don’t have a problem with Ben Askren being the favorite in this fight. Being as heavy a favorite as he is, well that’s just downright disrespectful to Lawler. Their resumes aren’t even remotely comparable. So we’ll know right away whether this gamble is going to pay off. Either Askren is the real deal Holyfield and he’s going to take Lawler down immediately. Or Lawler is going to stuff Askren’s first few attempts and then we are just counting the seconds until he shuts Askren’s lights off (which I think is quite safe to assume will happen in the event Askren can’t get a takedown).

Again if this were a cash game I might be more inclined to take Askren and bank on an old faithful wrestler to save the day. However, when you’re looking for the long ball, you’re not going to find much better value in DraftKings contest than Robbie freaking Lawler at $7,200.

What I’m Staying Away From

Absolutely nothing. This whole card is open season. As I said from the jump this card is ripe for finishes and upset opportunities. You can’t really go wrong unless you pick against Jon Jones.

This is going to a good one folks, strap in and enjoy. 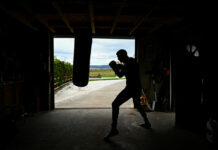 What Are Combat Sports Injuries?