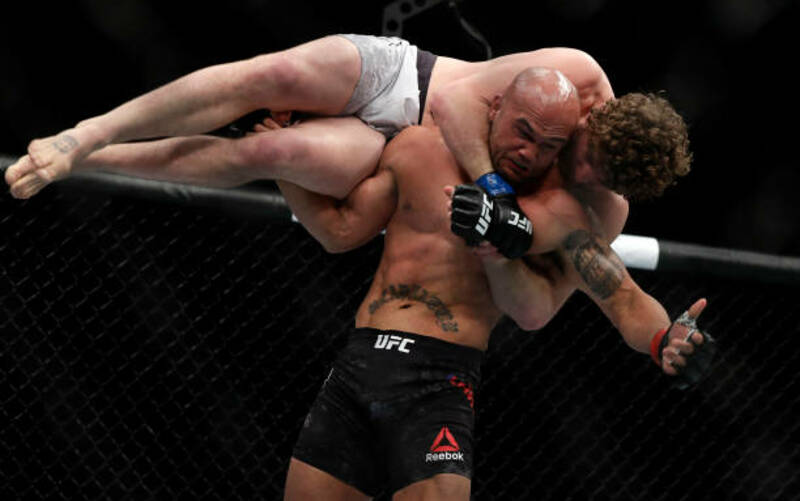 UFC 235 just wrapped up. With a fight card as stacked as this one was, there’s usually a lot to break down in the aftermath. Fight by fight, let’s talk about what happened.

Anthony Smith will go down as one of the biggest underdogs to ever compete for a UFC title. He previously fought at middleweight and despite winning most of his fights, he never came close to being a contender. He moved up to light heavyweight and looked significantly better against ranked 205ers. After three stoppage victories, he earned an opportunity to fight for the belt against the greatest light heavyweight of all time, Jon Jones.

As he paced back and forth on his side of the octagon ‘Lionheart’ stared down Jones. From dancing backstage, to his one-handed cartwheel, Jon Jones looked as confident as ever. The battle began and as the clock ticked away, it became more and more apparent that Jones would be winning a one-sided affair. Except for a momentary scare where it looked like Jones could lose via disqualification, (He landed an illegal strike and instead had two points deducted by the referee) Smith didn’t seem to give Jones anything to be worried about.

Win or lose, Anthony Smith should be proud of his performance. When Jones landed an illegal knee, Smith had the opportunity to get out of the fight, and to potentially win the belt on a technicality. He didn’t even consider taking that path. You could see it in his demeanor. Smith also defended the takedown well, and went the full five rounds with the champ.

Although these were impressive moral victories, the feats were not enough to win him the fight. ‘Bones’ retained the title via unanimous decision victory. There are multiple newly inbound contenders developing into the newest generation of light heavyweights. Jon Jones just beat the first of many.

In a fight between a dominant champion and the most avoided fighter in the welterweight division, something had to break. Kamaru Usman implemented a high-pressure wrestling strategy against welterweight kingpin, Tyron Woodley. It worked. He was able to out-wrestle and outpace Woodley from start to finish. Usman wouldn’t stop moving forward and pressing Woodley against the cage.

While in the clinch, he landed well over 100 body strikes on the champion. Usman made Woodley look human. In doing so, he officially became the first UFC champion from the continent of Africa. I’ve said it before, and I’ll say it again—there’s never been a better time for the UFC to bring a fight card to Africa.

In what was being characterized as highly-anticipated, Ben Askren finally made his UFC debut at UFC 235. He fought the last man to hold the welterweight title before Tyron Woodley, Robbie Lawler. ‘Ruthless’ started out the fight with an absolutely vicious assault on Askren. He slammed Askren on his head and landed multiple heavy punches on his face while he was grounded.

‘Funky’ looked to have barely survived the attack, but he found a way to begin nullifying Lawler’s offense. While turning the fight into a grappling session, Askren placed Lawler in a bulldog choke. This submission hold didn’t look to be under Lawler’s chin. However, Lawler’s arm appeared to go limp, causing Herb Dean to wave off the fight. Immediately after the bout was stopped, Lawler stood up and objected to the stoppage. To the surprise of many, he might’ve not been unconscious after all.

This controversial stoppage was eerily similar to Askren’s 2010 technical submission victory over Ryan Thomas at Bellator 14. Both finishes were chokes that referees had prematurely stopped bouts for. In both fights, the crowd rained down boos as the bout was being concluded. It’s a shame that such a widely anticipated match-up ended this way. Even Herb Dean looked to be apologizing to Lawler immediately afterward. Ryan Thomas had his rematch against Ben Askren. It’s only fair that Robbie Lawler gets his.

Weili Zhang came into this fight on an astonishing eighteen fight winning streak. Sixteen of the eighteen wins came via finish. That being said, she’s a ferocious competitor. Tecia Torres came into this fight aiming to get back on track after losing back-to-back fights against Joanna Jedrzejczyk and Jessica Andrade. Though having two losses in a row is never a good situation for a fighter to find themselves in, there’s absolutely no shame in losing to the consensus number one and number two strawweights in the world.

In a competitive affair that saw heavy ground elbows and fun scrambles, Weili Zhang defeated Tecia Torres via unanimous decision. She is now 3-0 in the UFC, and just beat the number seven ranked strawweight. Seeing how she is from Beijing, the UFC will undoubtedly use Weili Zhang for their expansion into mainland China.

Leading up to this fight, we saw an endearing ‘bromance’ take form. In an age of forced trash-talk, it was kind of refreshing to see two competitors being complimentary of each other. Regardless, neither fighter forgot about the task at hand. Pedro Munhoz and Cody Garbrandt came into their fight against one another while experiencing opposite career trajectories. Munhoz came in on a two-fight winning streak, whereas Garbrandt was looking to break a two-fight losing streak.

In what became a wildly chaotic brawl, Garbrandt was knocked unconscious, rendering Munhoz the victor. Pedro Munhoz extends his winning streak to three, while Cody Garbrandt extends his losing streak to three. Munhoz likely broke into the top five with the victory over number two ranked, Garbrandt. It may be prudent for ‘No Love’ to take some time off. This was his 3rd KO/TKO loss in the last 14 months.

Exactly one month prior to UFC 235, Johnny Walker knocked out Justin Ledet in 15 seconds. After Ovince Saint Preux pulled out of his fight against Misha Cirkunov, Walker volunteered to step in on short notice. This decision paid off. It took Walker all of 30 seconds to land a flying knee that dropped the number 14 ranked Latvian-Canadian. Walker chased Cirkunov to the canvas and landed blows until the fight was waved off at 36 seconds. Johnny Walker is now 2-0 after his stint on Dana White Contender Series Brazil 2. At only 26 years old, with knockout power, and a fan-friendly personality, Johnny Walker looks to be a potential contender at 205 lbs.

Cody Stamann defeated Alejandro Perez via unanimous decision. The loss for Perez snaps a four-fight winning streak. Ranked number 12 in the world, it may be time for Stamann to face another top 10 opponent. If he’s willing to wait, perhaps Cody Gabrandt could be in his future.

Diego Sanchez was called out by Mickey Gall. Gall wanted the match-up and he got it. Many people, myself included, expected Gall to finish Sanchez. Gall seemed to think he would too. He threw numerous heavy shots at Sanchez to kick off their fight. These winging punches would be his undoing. By the end of the 1st round, Sanchez proved he could take Gall down, and Gall began showing signs of fatigue. It wasn’t long before ‘The Nightmare’ TKO’d a gassed out Mickey Gall in the 2nd round.

Coming into this fight, Sanchez was living in the aftermath of divorcing his wife. In more ways than one, this was a much-needed win. I still remember people calling for Sanchez’s retirement after his UFC 200 TKO loss to Joe Lauzon. Almost three years later, Sanchez has back-to-back wins at welterweight. TUF 1 never die.

Edmond Tarverdyan protégé, Edmen Shahbazyan remains undefeated. He extended his unbeaten streak with a 40 second TKO victory over Charles Byrd. Byrd shot in for an early takedown and ultimately succumbed to lateral elbows thrown by Shahbazyan. Edmen is now 2-0 in the UFC, and 9-0 overall.

Macy Chiasson won TUF 28 as a female featherweight. Despite winning a UFC contract at 145 pounds, she dropped down to 135 pounds to face Gina Mazany at UFC 235. This proved to be a wise decision as Chiasson beat Mazany via first round TKO. Despite dropping to a lower weight division, Chiasson claimed she had never felt stronger coming into this fight. Though she seems keen on fighting at bantamweight, it’s entirely feasible the UFC offers her a featherweight bout next. She’s proven she can compete there, and there are some fun matchups available in the weight class. For example, a fight against Megan Anderson would be pure fireworks.

After beating a mugger senseless in her home country of Brazil, Polyana Viana’s name recognition sky-rocketed. Unfortunate for her, Hannah Cifers showed enough determination to win a split-decision victory over her when it mattered most. This marks Cifers’s first victory in the UFC, while Viana’s UFC record drops to 1-2.