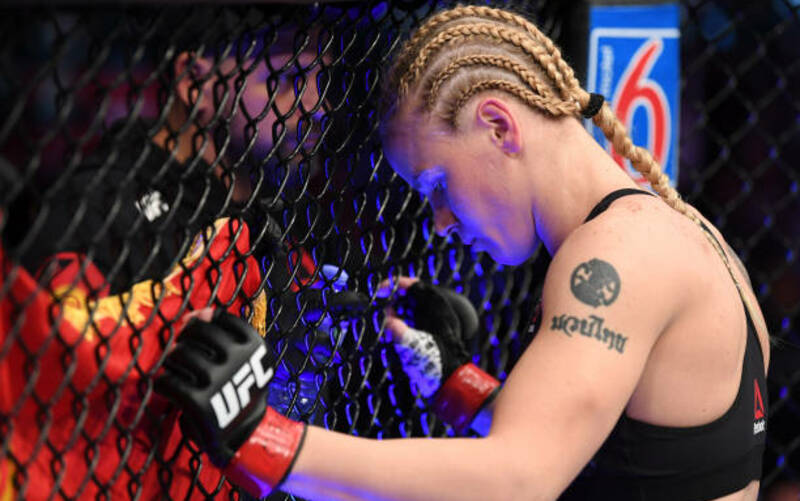 Earlier today, the UFC officially confirmed that Valentina Shevchenko (16-3) would be making the first defense of her 125-pound title against surging contender Jessica Eye (14-6-1). The fight is scheduled to take place at UFC 238 on June 8 from the United Center in Chicago, Illinois.

Valentina Shevchenko’s Path to the Title

Shevchenko, a muay thai specialist, originally established herself as a bantamweight contender in the UFC. She won three of her first four fights in the promotion at 135 pounds. The only loss in that stretch came against current two-division champion Amanda Nunes.

Following back-to-back victories over Julianna Pena and Holly Holm, “Bullet” earned a rematch against Nunes. That took place at UFC 215 for the bantamweight title but she once again came up short. She then elected to drop back down to flyweight where she picked up a one-sided victory over Priscila Cachoeira in February 2018.

The victory over Cachoeira earned Shevchenko a shot at the vacant 125-pound title and she was matched up against former strawweight champion Joanna Jedrzejczyk. The two met at UFC 231 this past December where “Bullet” earned a convincing decision victory.

Eye, on the other hand, has had quite a bit of trouble competing at bantamweight over the years. Upon making her UFC debut in 2013, Eye went just 1-5-1 before deciding to drop down to flyweight in 2018. And that has proven to be a tremendous decision.

Since making her return to 125 pounds last year, Eye has reeled off three-straight victories over Kalindra Faria, Jessica Rose-Clark and Katlyn Chookagian. With an impressive winning streak and a newfound momentum, Eye is without a doubt worthy of a shot at UFC gold.

It’s currently unclear if this bout will serve as UFC 238’s main event. Stay tuned to MMASucka.com as more news regarding the card unfolds.