Bellator has been on a hot run as of late signing much of Europe’s best talents. One of those is Sweden’s Malin Hermansson. Hermansson is very young in her MMA career at 2-0 but brings a lot of excitement and overall combat experience to the table. This is something Bellator fans, and WMMA fans around the world will appreciate.

“I started boxing when I was around 17 years old,” Hermansson stated to MMASucka.

“Boxing was something I was longing for to start doing for many years. I got a boxing bag already when I was 14 years old.” Though many new to Hermansson may speculate a 2-0 record is way too early to be signed to an organization such as Bellator, one only needs to look a bit deeper into her boxing career.

“I did around 50 fights in amateur boxing, winning three silvers and one gold at the nationals with a bunch of other medals. After that I felt it wasn’t enough with only boxing,” Hermansson stated. “In 2014 we started to talk about the transition to MMA.” Hermansson also joked about landing a nice double leg takedown in a boxing matchup.

The Transition to MMA

When the time was right to transition to MMA, Hermansson enlisted the help of her coach and now fiance, Patrik Hjulstrom. “It’s crazy how many hours he spent with me in the gym. Learning, explaining, and working. He’s got crazy patience!” Hermansson stated.

“He’s the one that built everything for me in MMA. I’ve put it all in his hands and it has ended up pretty good I would say, but it hasn’t been a walk in the park.” Hermansson went on to joke that being the coach of your girlfriend can’t be the most fun job in the world but that the couple would not change it for anything. “He is helping me to reach my dreams. He is my biggest supporter and guide in the MMA world.”

Another important piece to her MMA development is that of coach Fredrik Stoltz. Hermansson laughingly stated the two can be quite annoying in the corner but work so well together and make a great coaching team. Stoltz is another gym inspiration for Hermansson to show up day in and day out working hard to develop her skills.

With Bellator 218: Sanchez vs. Karakhanyan 2 set for Friday, March 22, 2019, the debut on the big stage of Hermansson is quickly approaching. “I’m very excited. Now when we’re getting so close to the fight I actually realize this is happening for real,” Hermansson stated. “I’m thankful, excited, and I’m going to grab the opportunity to shine. I’ve been grinding for so many years outside of the spotlights, it’s time to make things happen.”

Hermansson will do her best to make this battle feel like any other she’s competed in over her many years of combat sports. “The fight itself is as any fight, getting inside a cage and get a win. So it’s nothing new or different. The only difference is that we’re doing it in the States. I’ve never fought there before so I’m so crazy excited to just get the opportunity to fight in the U.S.” Of course, she is a huge fan of Alexander Gustafsson and will hope to build the same success within the Swedish fight scene as he has.

So for anyone new to Hermansson, this is what to expect. “I’m not here to take a seat and hold back myself. I’m here to do the opposite because I’m here to fight and entertain,” Hermansson said. “I have a different style and sometimes it can look a little unwise dancing around in an MMA fight with the hands hanging around at the waist. But hey, that’s just what I do, The Herminator style!” 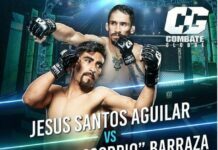