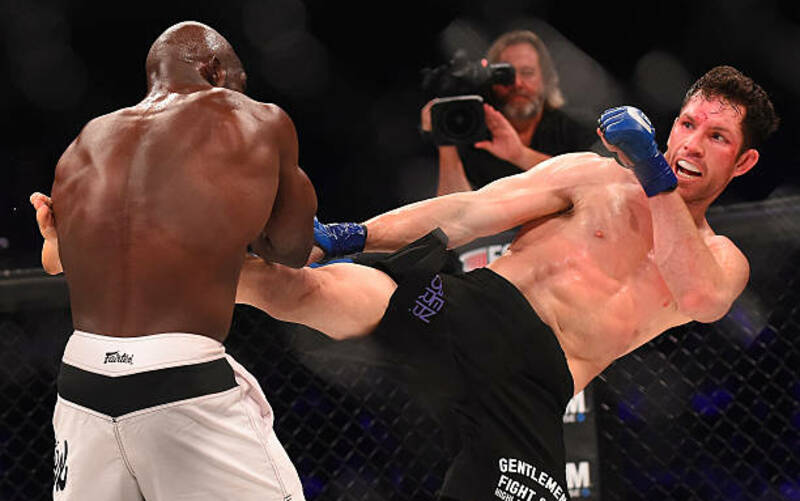 Keith Berry (15-14-1 MMA) has been competing in the sport of MMA for thirteen years now. A true pioneer of the sport, Berry is now looking forward to the biggest opportunity in his career. Fighting in front of his home crowd, Berry realizes a big win is due for his career. Sporting his nickname “KO Kid” from his earlier days as a professional, Berry is looking to get the win in spectacular fashion to pay homage to his trademark nickname.

“The thing about this fight,” Berry began telling MMASucka. “No other fight in my career matters as much as this one. Because if I knock him out, it’s going to look great. It puts me in a new page for this year, puts me right back to where I need to be and where I want to be. I do my best when people talk shit and Joe Schilling is that kind of guy. [He’s] a brash kickboxer and he has a certain type of style where I think I can match and rise to the occasion.”

“I’m going to come in there hard. I’m going to mix it up and I will be throwing some hard punches. It’s going to be a fun fight and I don’t think it’s going to go three rounds.”

Berry is taking on world-known kickboxing champion Joe Schilling (3-5 MMA). Schilling has competed in numerous champion-level Muay Thair tournaments and is coming off a win back in November when he took on Will Morris at Bellator 210. Berry knows that Schilling is still a developing mixed martial artist and is looking to take advantage with his experience.

“He’s a high-level kickboxer and is obviously going to relying on that to get the win in the fight. I’m just looking to break him down in any way and use my best abilities to beat him. Straight punches, maybe some takedowns. We’ll see.”

Berry is now closing in on over 30 professional mixed martial arts matches. At the beginning of his career, he gained a surge in his credibility after multiple quick knockouts and going on a winning streak. Since 2013, however, Berry has struggled to regain some of the momenta that carried him in the early stages of his career. This moment is absolutely critical for Berry if he wants to continue success within his Bellator career.

“This is in front of my hometown, my mom is going to be watching, my grandparents are going to be there, I mean, do I really want to get knocked out in front of my family and home town? I have been fighting for 13 years and it’s time for me to knock somebody out and get that good win on T.V. I am putting a lot into this fight with my diet, training, and everything. This one means a lot to me.”

This will be Berry’s eighth appearance under the Bellator banner. His most recent outing saw him get a draw against fellow middleweight Kevin Casey (9-6-2 MMA). Berry appreciates the opportunity Bellator presents to fighters. Still pursuing local shows while also providing good payment is all that Berry can ask for from a promotion.

“Every time I have fought for Bellator they have treated me very well. I really like them. They are definitely good premiere organization trying to battle the number one big dog, the UFC. Really branching out and making their presence globally. They put on some of the more local fights here in California, with local guys too. So yeah – I really like Bellator.”