CJ Henny is one of the nicest fighters in Louisiana you could ever meet. CJ Henny is also one of the most dangerous, savage competitors you can lock in a cage across from another man. The journey for Henny has not been easy, or short for that matter. Henny is one of the few fighters today who can say MMA had a major role in saving and turning around his life.

“I got started into MMA looking for a different direction and way of life. I was constantly going back and forth to doctor’s appointments being over-weight and with high blood pressure,” Henny stated. “With a history of high blood pressure in my family, I knew I had to break that cycle.” As with many who were raised or grew up in Lafayette (myself included) the documentary “Fightville” was very influential on Henny. “Fightville” chronicles the early days of UFC lightweight contender Dustin Poirier.

“Fightville” was a true turning point for Henny. “I had nothing else to lose so I went to Gladiators Academy and met with Coach Josh [Artigue] and Coach Tim [Credeur]. From that day on it changed my life drastically and became part of a team that I consider family.” Henny said. “I went from 237 pounds to now walking around 180 pounds. With help and dedication to now fighting at 145 pounds.”

Training Under a Louisiana Legend

If you were to build a Mount Rushmore for each state with the contributing faces of combat sports on it, there is no doubt former UFC middleweight Tim Credeur would be predominantly featured. Credeur runs one of the most prominent MMA gyms in the south, Gladiators Academy.

“Training under Coach Tim, it’s no walk in the park but it’s a great gym. We all have heated moments but in the end I know my coaches and teammates only bring out the best in me. We train together and we go to war together and I wouldn’t want it any other way.” Professional fighter, Justin Mead, who trains with Henny stated he’s, “super nice with savage Muay Thai.” He continued by stating Henny is very talented and a great guy. “I really enjoy working with him. We click well,” Mead stated.

Influence Inside the Gym

Another prominent fighter out of Gladiators Academy, AJ Fletcher, also had great words to say about Henny. “CJ’s one of the most technical and creative strikers I’ve come across. The guy’s got clean boxing and vicious kicks, plus he’s a southpaw,” Fletcher stated. “He’s been one of my main training partners since I’ve got to Gladiators, and he’s been a huge part in progressing a lot of people’s game in the gym, including myself. CJ’s a beast of a fighter and also one of the nice guys you’ll meet.”

“I’m not just a striker and the guys I came across only see me as a striker. I also have a ground game so wherever the fight goes I’ll be ready for whatever. Having the team and coaches I have on a daily basis, I’m prepared to stand and strike or if it goes to the ground I’ll showcase my BJJ and will definitely deliver. I will give the fans an exciting show without a doubt and showcase my skills and dedication,” Henny said.

Henny did just that by winning at WFC 97 in November 2018 via guillotine choke. David Billiot took Henny down but the guillotine was locked in before the fighter even got to the mat. A short time later Henny’s hand was raised the winner.

Henny will be in action Thursday, March 21, 2019, at Cypress Bayou Casino in Charenton, Louisiana for WFC 101. His opponent for the night will be Christopher Plank in the featherweight division. Hopefully, this will serve as another stage for Henny to showcase his varied skills. 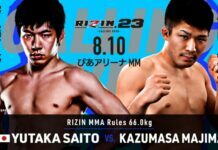 Yutaka Saito: “I Will Knock [My Opponent] Out” at RIZIN 23 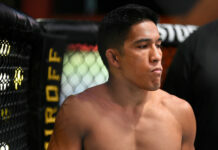 Vince Cachero Excited for Future at Bantamweight: ‘I Can Be a Pretty Dominant Force’