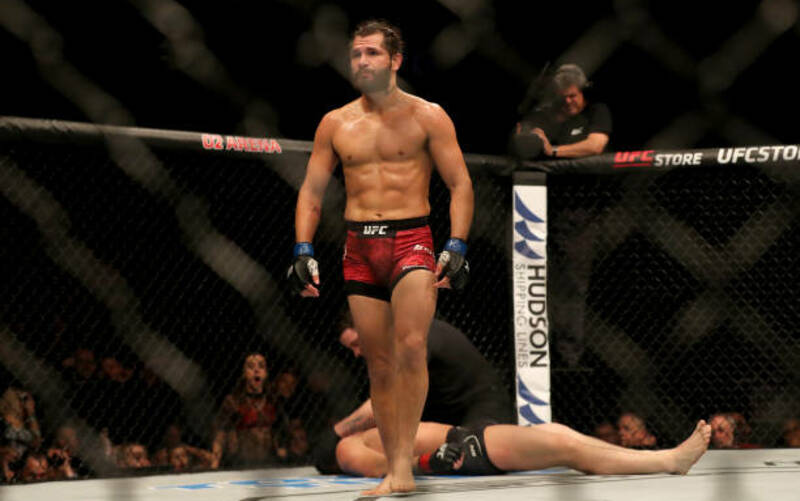 UFC London (technically known as UFC Fight Night 147) just reached its conclusion. There were knockouts, submissions, upsets, and even some punches thrown backstage. Join us as we break down the ins and outs of the main card, fight by fight.

Darren Till vs Jorge Masvidal

The crowd erupted as ‘Sweet Caroline’ blasted from the speakers. Darren Till confidently walked tall as he made his way to the cage. Defiantly unfazed by the crowd cheering on his opponent, Jorge Masvidal casually walked about the octagon. Till was the betting favorite for multiple reasons. He was bigger, younger, higher ranked, and fighting in front of his home crowd. But Masvidal volunteered for this fight. He was here because he wanted to be. From his street fights on YouTube to his time in the UFC, Masvidal was no stranger to throwing hands. But neither was Till.

In the first round, Till knocked Masvidal down with a heavy straight. Once Masvidal was sat down by the larger Till, it called into question whether booking a massive welterweight against a man who used to fight at lightweight was such a good idea. The question marks quickly became exclamation points. After consistently out-landing his opponent, Jorge Masvidal knocked out Darren Till at 3:05 of the 2nd round. With a definitive victory over the 3rd-ranked welterweight in the world, Jorge Masvidal might’ve just broken into the top five at 170.

Gunnar Nelson was able to take Leon Edwards down early in the 1st round. Known for his high-level grappling, this looked good for Nelson. Prefight, analysts like newly minted Hall of Famer Michael Bisping believed Edwards should want nothing to do with Nelson’s ground game.

But as it turned out, Edwards must not have gotten the memo. He was able to get the fight back to the feet, but not before taking Nelson’s back himself. In the 2nd round, Edwards landed a counter elbow that dropped Nelson. There was some large swelling around Nelson’s orbital bone from the strike. This caused commentators to speculate on the possibility of Nelson having a facial fracture. In the 3rd round, Nelson feverishly pursued getting the fight to the ground.

He eventually got the takedown and the full mount position in the final minute. Defending against Nelson while fully mounted is tantamount to scooping water out of a sinking boat. Fortunate for Edwards, his boat was close enough to shore and he avoided drowning. Number 10 ranked Leon Edwards defeated Gunnar Nelson via split-decision.

In his post-fight octagon interview, Edwards called to face the winner of Till/Masvidal. He also claimed he should have been the main event at UFC London to begin with. At the time of the call out, I expected Ben Askren to get the nod over Edwards. But live on ESPN+, while Masvidal was being interviewed backstage, Edwards began shouting something at him from off camera.  The camera followed Masvidal as he walked over and confronted Edwards face-to-face. In a matter of seconds, Masvidal began throwing punches. He may be in trouble for attacking Edwards, but the UFC is likely to book that fight now.

Dominick Reyes has been linked to a new group of UFC light heavyweights who could potentially contend for the belt in the near-future. He’s a proven athlete with a background in both football and wrestling. He came into UFC London at 10-0 with eight of his victories coming via finish.

It wasn’t long ago when Volkan Oezdemir was the talk of 205. He made a splash in the division with wins over Ovince Saint Preux, Misha Cirkunov, and Jimi Manuwa–the latter two wins were via KO.  Oezdemir got his title shot, but would ultimately fall short against then-champion, Daniel Cormier.  He lost his next fight via submission against recent title-contender, Anthony Smith. Coming into his fight against Reyes, Oezdemir was ready to get back on track. He came to regain his shine, by squelching Reyes’ fire.

To the surprise of many, Volkan Oezdemir was able to stuff takedowns and keep the fight standing against Dominick Reyes. Oezdemir stuck to his game plan and looked to some to be on his way to a decision victory, but ended up losing via split-decision. Dominick Reyes continues his undefeated streak at 11-0. This was his toughest fight in the octagon to date.

After losing in the finals of TUF Latin America 1, Jose Quinonez went 4-0 in the UFC. Though this spoke volumes about his abilities, he would undoubtedly have his hands full against Nathaniel Wood. Aptly nicknamed ‘The Prospect’, Wood showed tremendous promise as a UFC athlete coming into this fight. Having a reputation as a finisher outside of the UFC, Wood continued this trend with back-to-back submission victories after signing with the promotion. He extended that streak to three with a rear naked choke victory over Jose Quinonez. On a large stage in front of his countrymen, this was a major victory for Nathaniel Wood.

Danny Roberts aimed to push his current winning streak to three against the 12-1 Brazilian, Claudio Silva. Despite holding a split-decision victory over number-10-ranked Leon Edwards, Silva would be competing at an earlier time slot below the Englishman.

In what was undoubtedly a back-and-forth battle, the 36-year-old Claudio Silva won the bout via verbal tap out, due to an armbar. Unfortunately, the stoppage was controversial. Danny Roberts says he did not verbally tap, as he was just about out of the submission. This wasn’t the only questionable behavior by this referee. He also grabbed Roberts’ leg and re-positioned him in the middle of the fight. This happened after Roberts allegedly used his toes in the cage to place himself into a more advantageous position over Silva. The battle concluded with a black cloud hovering over it. This is a shame as the fight was quite entertaining for as long as it played out.

Going into his fight, Jack Marshman tipped the scales at 188 pounds, thus missing the non-title middleweight limit by two pounds. Having amassed a UFC record of 2-3, a win would be a necessity to keep his career with the top MMA promotion afloat. John Phillips was in the same boat after going 0-2 in the UFC–both losses via submission. Don’t let their records fool you though. Both men are known for their exciting finishing styles. But this fight had a deeper meaning. Both hailing from the same nation, Phillips stated whoever won this fight would be the newly proclaimed ‘king of Wales.’

Though the fight had some fun moments, it wasn’t the barn burner many had expected. After inadvisably letting Marshman recover from a knockdown, John Phillips would go onto lose a split-decision. This reminded me of when Wanderlei Silva and Chuck Liddell finally met in the octagon. Silva knocked Chuck down, let him stand up, and went onto lose a decision. John Phillips comes out of this fight with a new lifelong ‘what if’ question to ponder. Jack Marshman leaves with the crown.