The UFC returns to Philadelphia Saturday night with one of the most promising main events of the year thus far. It’s also one of the more even cards we’ve had from a betting line perspective in a few weeks, so what better time than now to find value amidst the chalk with the return of props and parlays.

Keep in mind these picks are by no means “locks” or “sure things”. These are the plays you make with the extra money in your car cupholder. The stuff you take a flier on because the downside is you lose money you would’ve otherwise forgotten you had and the upside is you now have 10x that amount of money. From most likely to biggest longshots, here’s the best props and parlays available for UFC on ESPN 2.

Admittedly, this is sort of cheating since it’s not a longshot at all. That said, if you plan on betting on Karolina Kowalkiewicz, you might as well get the most bang for your buck by taking the prop line as opposed to her straight up. Why? Well, she has only three finishes in her pro career, none of which are in the UFC. Michelle Waterson hasn’t lost by KO in nearly a decade and that shouldn’t change Saturday night. A successful fight for Kowalkiewicz looks like a lot of volume punching at range and punishing clinch work to deter takedowns. It’s hard to imagine her TKO-ing Waterson from inside the clinch (where she arguably throws her hardest strikes). Additionally, the idea of Kowalkiewicz shooting a takedown is nearly inconceivable.

If you’re taking Kowalkiewicz, save yourself the extra -40 on the juice and go with the decision line as that’s the only way she’s going to win the fight anyway.

This is more traditional prop betting territory. In one of the many pick’em fights on the card there’s value to be had in taking Johnson by TKO. As inconsistent as his performances may be this matchup lines up phenomenally for Michael Johnson. He’s getting Josh Emmett, who is coming off of a brutal KO loss and a litany of facial surgeries. The same Josh Emmett who really has only one win over a top-ranked opponent (Ricardo Lamas). Unless his cardio fails, which it has before, Johnson has all the tools he needs to stuff any takedowns and test out the durability of Emmett’s reconstructed face. There’s more than enough reasons to question whether Emmett is going to be able to endure the type of damage Johnson is capable of dishing out which makes the Johnson by TKO line one worth looking at.

Justin Gaethje being involved in a decision seems absolutely ludicrous, I know. However, if there was ever a fight where Gaethje might decide to use even a little of his wrestling, this one might be it. Not that he hasn’t fought dangerous strikers before, but Barboza has had a clear lack of success against pressuring wrestlers as of late. Perhaps Kevin Lee and Khabib Nurmagomedov’s success is enough to convince Gaethje to dust off those all-American wrestling credentials. It probably isn’t, as Gaethje appears to have a nearly unquenchable thirst for non-stop violence. This has all the making to be another classic back and forth Gaethje barnburner, before someone ultimately collapses in round three. That said with the opportunity to nearly 10x your money on the table taking a long shot on Gaethje mixing up his gameplan for once isn’t the worst use of money on the card.

The top three fights all make their way into the premier parlay of the evening. Given Barboza’s aforementioned struggles with pressure and Gaethje’s tendency to do nothing but apply it ,Gaethje has tremendous value as a dog here. There is very good reason to believe he can get it done Saturday night, even if Barboza is given the standup fight he desires. If that isn’t a convincing enough pitch you can always hedge out provided the other two legs go well.

David Branch is getting up there in age, but a loss to Jared Cannonier nonwithstanding has remained quite game. He was putting it to Luke Rockhold on the feet before getting taken down and pounded on. Jack Hermansson has all the momentum right now, but again, hard to pass on Branch’s veteran savvy and top game at underdog value.

As stated above, it’s going to be really hard to trust Emmett after such a brutal knockout and a boatload of surgery on his face. Couple that with the fact that if Johnson is remotely on mentally this looks like it could stylistically turn into exactly the fight he wants. A standup bout against a slower, less schooled opponent. Easy to see why he makes the cut.

It’s refreshing to have a card where the odds are all pretty close in proximity as opposed to the majority of the fights being -200 or higher as they have in weeks past. There’s a lot of great value just hunting around straight picks in general. If you need to take a couple of moonshots though, these are going to be your best bets.

All odds were taken from 5dimes. 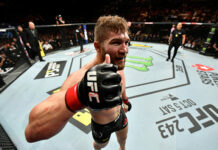