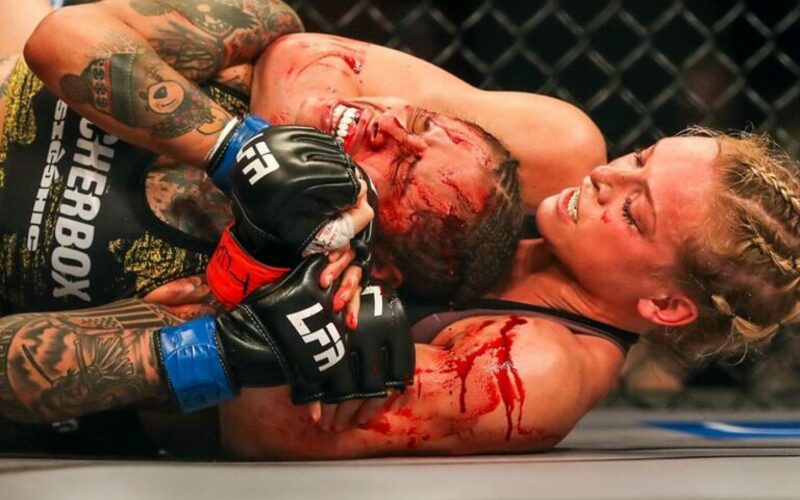 The competitors at LFA 63 may have felt some added pressure with Dana White filming his “Lookin’ for a Fight” series at the event, but that certainly didn’t stop them from rising to the occasion. Eight of eleven bouts on the card ended by way of stoppage, including two spectacular knockouts in the main and co-main event. Headliner Derrick Krantz received an invitation to Dana White’s Tuesday Night Contender Series after flatlining Justin Patterson, and featherweight standout Gabriel Silva remained undefeated with a vicious KO of Jake Heffernan.

But in a sea of finishes and fighters making their case for a UFC contract, one up and coming prospect got the crowd roaring before she even entered the cage—and blew the roof off the arena after her performance.

“All Hail” Hailey Cowan improved to 3-1 last Saturday night at LFA 63 with a second-round submission win over Sarah Click. The former two-time NACTA All American was in control most of the fight, taking Click down early in the second round and cutting her open with a big elbow before securing a rear-naked choke for the victory.

Here to Put on a Show

“I step in the cage to finish every time.” Hailey told MMASucka after her victory, “It was nice because I lost my pro debut by choke and tonight, I got the choke. A lot of people assume I don’t know how to grapple, and I do, I’m a very good grappler and I got to showcase that so that was kind of cool.”

After the aforementioned loss in her pro debut at LFA 40, Cowan rattled off back-to-back finishes in her next two bouts, including a highlight reel head kick knockout of Jessica Sotack at LFA 55. Her submission win over Click puts “All Hail” on a three-fight win streak, and she was excited that UFC President Dana White was in attendance to witness her performance.

“I didn’t even know he was gonna be here until a couple of days ago, my corner tried to keep it from me so I wouldn’t have the jitters,” Cowan said. “I’m super happy that he was here, I hope he was really impressed with me.”

Aiming for the Big Time….Eventually

Cowan has fought the majority of her MMA career under the Legacy Fighting Alliance banner, with her last amateur contest and all of her professional fights taking place within the promotion. While she hopes to get the call up from White one day, she’d prefer to get some more experience under her belt first.

“Obviously, UFC is the dream. I’m still super new, I would like a couple more fights to get ready for that but hopefully, I’m on [White’s] radar.

Given Cowan’s ability to command the spotlight, it would have been hard for the UFC President not to take notice. The 27-year old’s aggressive in-cage style and bubbly personality is the type of combination that shines in the UFC, and with the company looking for talent to build its women’s 125-pound division, “All Hail” seems to fit the bill.

Lookin’ For a Fight

Only time will tell if Cowan’s showing at LFA 63 was enough to get the attention of White and company. Until she gets that call from the UFC, however, she’ll be focused on fighting whoever LFA puts in front of her and getting back in the cage as soon as possible.

“Oh man, I’d like to get back in the cage maybe, twenty minutes after the main event,” Cowan laughed. “Whenever they put me back in, I’ll fight whoever, I don’t care. I’ve never said no to a fight and I’m not gonna start doing that now, so we’ll see who they put in front of me and I’ll fight whoever is standing across the cage.”