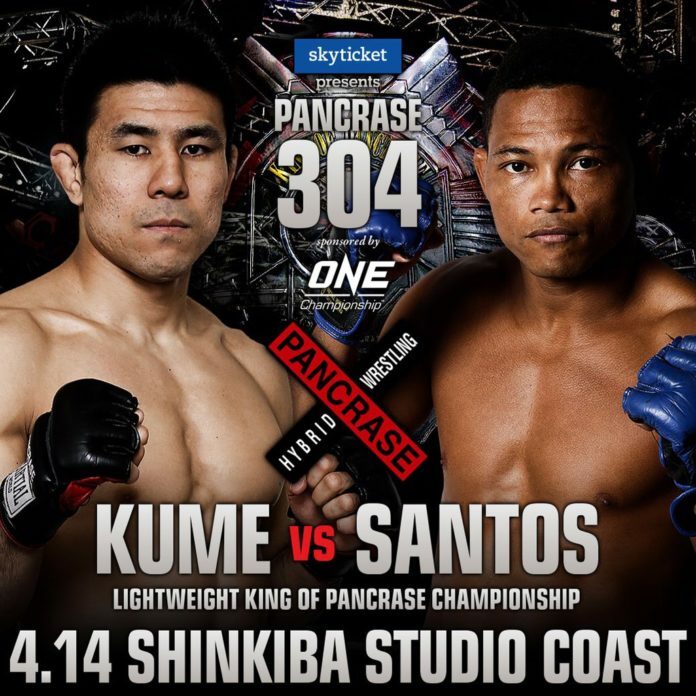 Pancrase takes over the Studio Coast in Tokyo, Japan once again with yet another loaded fight card.

Pancrase 304 is topped by an absolutely fantastic match-up as Takasuke Kume looks to defend his lightweight championship against the heavy-handed Brazilian bomber Tom Santos.

Though he is coming off a loss to Anton Kuivanen last year in a non-title bout, the champion Kume was previously riding a five-fight win streak. This includes the title win and one title defense. It was against Kazuki Tokudome that he both won and defended the Pancrase Lightweight Championship. He won both bouts against the former champ by way of first-round knockout.

A winner of eight of his last ten fights, Tom Santos most recently returned to Japan and won the HEAT Lightweight Championship by defeating Rae Yoon Ok in a wild five-rounder. Before this, Santos was unsuccessful in his RIZIN debut. In 2017, the Brazilian became the first man to knockout UFC veteran Yui Chul Nam under the ROAD FC banner. “The Korean Bulldozer” was granted an immediate rematch, and Santos finished him in just seven seconds the next time the two met.

The Japan vs. Brazil theme carries into the co-main event of Pancrase 304 as well! Japan’s Takayo Hashi faces Brazil’s Sidy Rocha to crown a Flyweight Queen of Pancrase.

Check out the full card below that will be updated with results as the event progresses.

Also, check out the results of Pancrase 303.