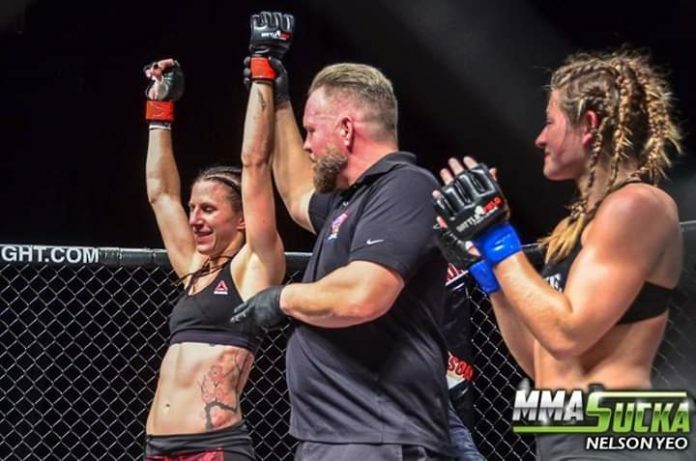 Undefeated British Columbia prospect, Jamey-Lyn Horth will travel to the East Coast of Canada for her next bout. The 29-year-old signed a multi-fight deal with TKO MMA and will make her debut on May 24 against Corinne Laframboise.

Horth (2-0) turned pro in 2018 and has gone undefeated in her career thus far. The Sound Martial Arts product TKO’d both Coralie Dixon and Christina Ricker in their respective bouts. Her last bout happened at BFL 57 in September of 2018 and has found it extremely to find fights within B.C.

“It’s a great feeling having a fight locked down,” Horth told MMASucka.com. “I train regularly for this. I’m ready — and this 4-week camp is going to be the best camp ever. Short and dialled in.

“I am very excited to fight at a different venue. I am beyond grateful for BFL and all they have done, especially allowing me to take this contract and those next steps.”

Laframboise (3-2) has fought all but one of her professional bouts under the TKO banner, including her most recent victory over Morgane Ribout at TKO 45 in December of last year. The Montreal, Quebec native has bounced back and forth with wins and losses in her career, with two of her three victories coming via submission. Laframboise trains under Fabio Holanda at Brazilian Top Team Canada.

Three titles up for grabs

TKO 48 goes down on May 24 from Gatineau, Quebec and features a battle between for the heavyweight championship as Roggers Souza takes on Cyril Gane in the evening’s main event. Two other titles are on the line at TKO 48, as Taylor Lapilus faces Nate Maness for the bantamweight gold and Mandy Bohm squares off against Jade Masson-Wong for the women’s flyweight championship.