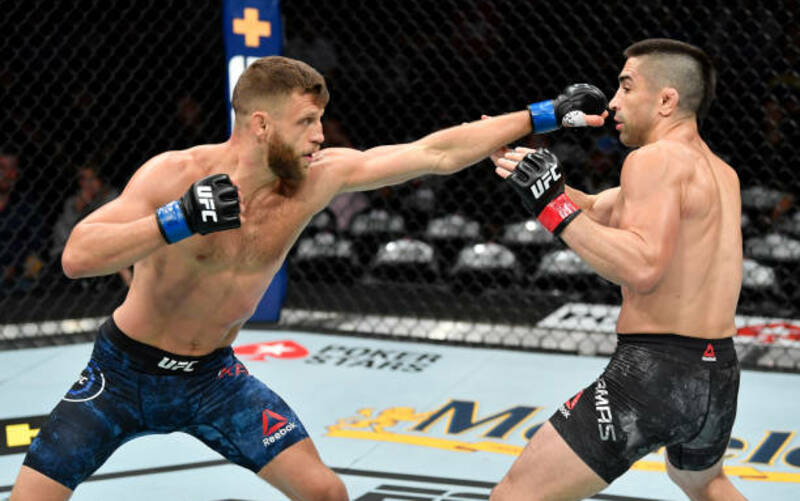 On June 8th, Professor Calvin Kattar delivered another boxing lesson to the masses at UFC 238, utilizing #10 ranked featherweight contender, Ricardo Lamas, as his test subject. Analysts and pundits have been noting Kattar’s outstanding boxing technique for a while, and it seems with every victory the Bostonian picks up, the more he builds a case as a potential title contender.

In his second consecutive first-round finish, Kattar utilized a variety of jab techniques to pick apart the longtime veteran and likely earn a shot at a top five contender.

>Similar to #1 ranked featherweight contender, Alexander Volkanovski, Kattar possesses a slick setup to his standard step jab. He feints and paws with his rear hand, squaring his shoulders up, and threatening with it. Then, he steps hard with his lead leg and torques his right elbow back to put more power into the jab.

The step (or stepping) jab is Kattar’s bread and butter. Kattar is very sound mechanically, which means his jab is both economical and dependable. When Kattar extends on a jab, his weight is evenly distributed between his front foot and the balls of his feet on his back foot. He extends his lead arm fully, keeping his chin by his shoulder before retracting.

In the opinion of this writer, the body jab is one of the most underutilized techniques in the sport today, so imagine my joy when Calvin Kattar started spearing Lamas’ ribs.

>Kattar feints up high with both hands, rendering Lamas unable to anticipate the plane of attack. Kattar steps in with his jab, much in the same way he does with the step jab.

The body jab serves multiple purposes in MMA. As shown in the GIF above, it can be used to make an opponent guess about the threat of both high and low attacks. For wrestlers, however, stepping in with a body jab looks quite similar to a level change. Adding the threat of the takedown behind boxing is essentially the crux of the wrestle-boxer archetype in MMA. All of this combined with the small gloves means that body jabs can be spearing punches to a large target that aren’t easily blocked.

One of the more uncommon techniques you’ll see in MMA is the trip hammer jab, but Kattar landed an excellent one against Lamas that stung the veteran.

>Kattar throws his jab from a higher guard to a lower target. The path of the punch is diagonal and downward. Lamas throws a jab of his own that is short-armed, but Kattar’s trip hammer jab staggers Lamas.

The trip hammer jab isn’t an especially powerful variation of the jab, but it is an extremely difficult punch to see coming since it’s unloaded straight from the chin and there’s very little weight behind it. Notice Kattar’s posture in the GIF above. He doesn’t lean his upper body into the jab, nor does he step particularly hard with his lead leg. The trip hammer jab is more of a flinching punch than a stinging one, but it’s accurate and difficult to time. It can also threaten an opponent’s sense of distance, since the thrower doesn’t have to extend their posture or reach to land it.

The finish was perfunctory, but no less impressive from Calvin. Lamas was having extreme difficulty finding any sort of range or comfort on the feet against Kattar, and his feints were making Lamas even more fidgety with his offense. Eventually, Kattar found his mark.

>Kattar feints a 1-2-1, and as Lamas is reaching in reaction, Kattar hooks around Lamas’ arms and lands a cross behind the hook. Most of Kattar’s offense up until this point had been pot shots, but in the finishing exchange, he switches up his punch selection as well as his rhythm, landing the 2 a half beat behind the 3, akin to Kattar’s typical half-beat separation between the 1 and the 2.

After establishing the threat of the jab and feinting Lamas into inertia, Kattar was free to completely tune up the veteran. Switching up the jab to a left hook showed strong awareness from Calvin. It was as clinical as anything Kattar has shown in his UFC career thus far: establish the threat of the jab, make the opponent react to its variance, then layer the hard shots behind it.

After a string of decisions on the regional scene and a short-notice decision victory over Andre Fili, I balked at Kattar’s nickname “The Boston Finisher” as being hilariously misguided. Since then, however, all three of Kattar’s UFC wins have been by way of stoppage and this one is the most significant of the bunch by a wide margin. There is a level of granularity to Kattar’s boxing technique that simply isn’t common amongst most competitors. In four minutes of action, Kattar showed off at least four variations of his trusted jab, and he’s shown even more in his previous bouts. I don’t know what Kattar’s ceiling is just yet. However, as long as he keeps boxing up competitors in the UFC’s best division, I don’t think I’ll care.

Daniel Martin discovered MMA in 2015 and has been an avid follower and spectator ever since. He began writing articles in early 2017 and has since become a regular analyst for himself and other passionate fan of the sport.