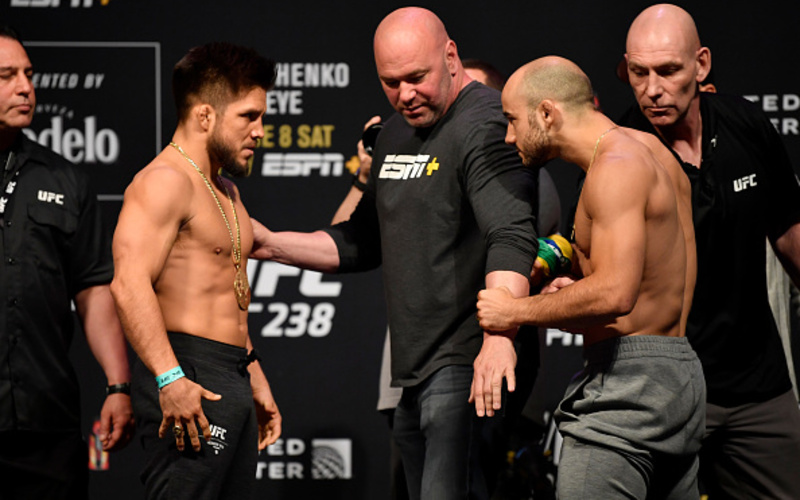 The UFC returns to Chicago, Illinois for one of their best cards of the year. In the main event, the vacant UFC men’s bantamweight championship will be on the line. The UFC’s flyweight champion, Henry Cejudo, will move up to 135 pounds for the first time since 2013. In his return to the bantamweight division, he will face former WSOF bantamweight champion, Marlon Moraes. Cejudo will try to become the fourth UFC champion to hold two titles simultaneously. As for Moraes, since losing his UFC debut, he has won four straight and will look to capture UFC gold in his first opportunity.

The co-main event will also feature a five round title fight, this one in the women’s flyweight division. After defeating Joanna Jedrzejczyk at UFC 231 to become the UFC women’s flyweight champion, Valentina Shevchenko will attempt to defend her title for the first time at UFC 238. She will be taking on Ohio‘s own, Jessica Eye, winner of her last three straight. Prior to her win-streak, Eye was coming off four straight losses to Meisha Tate, Julianna Pena, Sara McMann, and Bethe Correia. Now, Eye will get her first opportunity to capture UFC gold.

Before the co-main event will be what is being deemed as “The People’s Main Event”. Coming off eleven straight wins and a layoff dating back to October, Tony Ferguson will return to the cage in Chicago. He will be facing off against former lightweight title challenger, Donald Cerrone, who has won three straight since becoming a father. The winner of the fight will more than likely earn themselves a title shot against the winner of Khabib Nurmagomedov and Dustin Poirier at UFC 242 in September.

Kicking off the main card will be a fight in the heavyweight division. Coming off the first loss of his career to former UFC heavyweight champion Junior dos Santos, Tai Tuivasa will return after six months. His opponent will be the former WSOF heavyweight champion, Blagoy Ivanov. Following that fight will be a fight in the men’s bantamweight division. After winning twenty straight fights dating from 2009 to 2017, Jimmie Rivera has since lost two of his last three. He will look to begin getting back on track as he facesa rising star in the 135 pound division. His opponent will be Russia‘s Petr Yan, who will be looking for his fifth straight win in the UFC in under a year.

Follow along with MMASucka as we provide you with the results throughout UFC 237.