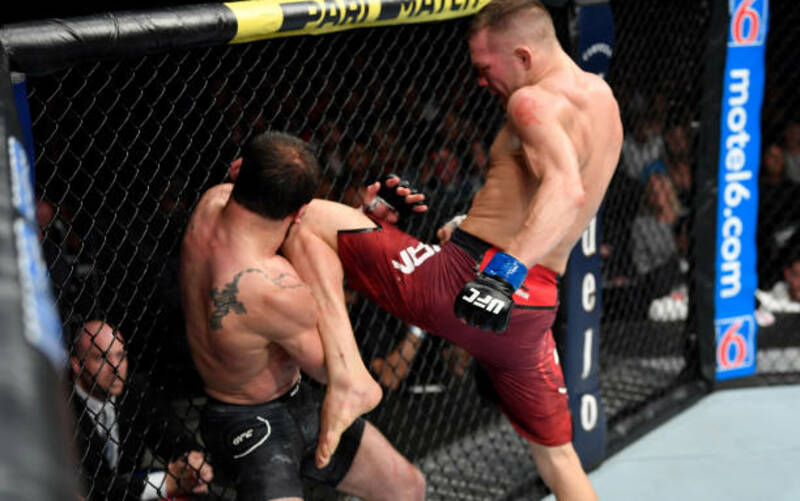 The UFC 238 pay-per-view card has officially reached its conclusion. History was made, controversy was present, and aesthetic combat was bountiful. Let’s break down the main card fight-by-fight.

Henry Cejudo is a man who has accomplished the unthinkable. He’s an Olympic gold medalist in freestyle wrestling. Then, he won the UFC flyweight title against arguably the pound-for-pound greatest fighter on the planet. He beat that man just five-and-a-half years after his professional mixed martial arts debut. He then defended his UFC flyweight belt against a champion from a higher weight division; a champion who then tested positive for EPO. Now, he has moved up a weight class and defeated the extremely dangerous Marlon Moraes, thus becoming the official UFC bantamweight champion and the UFC flyweight champion simultaneously.

Henry Cejudo’s bantamweight title victory came with adversity. In fact, Marlon Moraes was the clear victor in the first round. He completely froze Cejudo with his offense and landed several damaging leg kicks on the flyweight champion. However, the second round played out much differently. Moraes significantly slowed down and Cejudo began pouring on the damage. Though Moraes arguably did more in the second round than Cejudo did in the first, Cejudo was the clear victor of the round.

Likely 1-1 going into the third, Moraes reverted back to what made him successful in the first round–throwing leg kicks. Cejudo continued to press forward with punches and was landing heavy knees in the clinch. But a new kind of fight would take place when the competitors went to the ground. Though Moraes worked his submission game to keep Cejudo from getting too comfortable, the ground-and-pound from the flyweight champion would be cause for stoppage just seconds before the end of the third round. Henry Cejudo defeated Marlon Moraes via third-round TKO to become the new UFC bantamweight champion.

In his last three fights, Cejudo has expedited the development of his credibility enough to be considered a pound-for-pound great. This is one of the most unexpected and impressive runs the sport of MMA has ever witnessed. And to think, it all started with a championship rematch that seemingly nobody even wanted.

Valentina Shevchenko was more or less considered the UFC flyweight champion once she made it known she intended on competing in the weight class. Though the announcement took place nearly two years ago, she only won the belt six months prior to UFC 238. Regardless of when exactly she became the top dog at flyweight, she remains the official champion after defending her title at UFC 238.

Valentina Shevchenko defeated Jessica Eye via devastating left head kick knockout in the second round. This was one of the more brutal finishes in recent memory. Jessica Eye was left stiff on the canvas for several minutes afterward. Though Eye looked more than prepared to face the champion, one single mistake would be her downfall. Challengers had better come correct when they’re facing the flyweight queen.

The people’s main event? Absolutely. Amazing match-up between two incredible warriors? Without question. Great fight in the end? It’s complicated. For as long as it lasted, the fight between Donald Cerrone and Tony Ferguson was action-packed. But the ending was very anti-climactic.

Due to swelling in Cerrone’s right eye, the fight was stopped by doctors between the second and third round. The crowd wasn’t happy, but in this author’s opinion, the officials made the right decision. With what appeared to be a broken nose after the second round, blood was pouring out of Cerrone’s nostrils. Just as the third round was set to begin, Cerrone blew his nose in an effort to clear his airways. This caused his right eye to swell completely shut almost immediately. You could see the look of surprise on Cerrone’s face as it happened. Doctor’s entered the cage and reviewed the swelling. They had no choice but to stop the fight shortly thereafter. Tony Ferguson officially defeated Donald Cerrone via TKO after the second round.

Had Cerrone not blown his nose, the third round could have happened and it might’ve been something truly special. Cerrone admitted this was an error on his part. Although the error had large consequences, it’s understandable that a fighter would inadvertently blow their bloody nose in a fast-paced fight. After all, being able to properly breathe is a major necessity against an elite conditioned athlete like Tony Ferguson. As fans, we can all be upset that we’ll never know what would have happened in the third round, but we can also be grateful that we got to see these two studs compete against each other for two rounds.

Before losing two of his last three fights, Jimmie Rivera went 21-1 in his professional MMA career. This included a 5-0 run in the UFC’s bantamweight division. While Rivera was on this streak, many onlookers began deeming Rivera a potential title contender. Though this supportive movement recently came to a halt, Rivera would undoubtedly be Petr Yan‘s toughest fight to date. And though Rivera was dropped by Yan in the first and second round, he fought hard and would fearlessly engage with the up-and-comer in several wild exchanges. Petr Yan is likely closing in on a top-five ranking, because he defeated the number-seven-ranked Jimmie Rivera via unanimous decision.

While Tai Tuivasa was coming into this fight looking to rebound from his first professional MMA loss, Blagoy Ivanov was looking to maintain his momentum after getting his first win in the UFC. Both fighters would land heavy shots on one another, but neither competitor would fold. This fight would not be given away. It had to be taken.

Ivanov staggered and dropped Tuivasa in the first round. In the second round, Tuivasa rattled Ivanov with a heavy punch. Despite the damage he had taken in the second, Ivanov had Tuivasa in a guillotine choke at the end of the round. Tuivasa appeared to tap from the submission while it was held after the bell. Though this certainly looked suspect, it’s more likely that the ‘tap’ was Tuivasa casually patting his opponent in an effort to ask Ivanov to let go. This idea was further established when the ‘tapping’ continued as both men were standing up. In the end, the fight went all three rounds. The judges would declare Blagoy Ivanov the victor via unanimous decision.