Jared Gooden is the number one ranked middleweight in the state of Georgia. He is also the number 1 middleweight in both the US Southeast and the US southwest. Gooden currently holds a 14-4 pro record with 10 of those wins coming by way of finish.

In relation to his fight with Stamps, Gooden says, “Beating Stamps is a good fight to get me back on track. Back in the win colum, and starting my new winning streak.” Gooden also mentioned in his interview with MMASucka that he doesn’t feel his experience gives him any more of an advantage. Instead, he said if anything gives him a little more confidence it’s his cardio advantage. Gooden stated that he has seen Stamps gas out in some of his previous fights.

Marcel Stamps is a very promising prospect out of Alabama. He is 4-1 as a pro, with all 4 of his wins coming by way of finish. Also on his resume is a knock out win over UFC vet Kendall Grove in BKFC. Like Gooden, Stamps is also the number one middleweight in his home state of Alabama.

What Could Be Next For Gooden

This fight is a huge opportunity for Jared Gooden. With a win here, he is that much closer to landing a big contract with one of the bigger promotions. A win over Stamps will definitely reel in a lot of attention, making him the best middleweight on the east coast.

Two weeks before his fight with Stamps on September 28th, Gooden will also be competing in a sub only quartet. The local Georgia promotion NFC will be hosting a gym vs gym sub only contest, between Gooden’s gym X3 sports and Creighton MMA. X3 sports was awarded MMA/kickboxing gym of the year is 2018, While Creighton MMA was awarded BJJ academy of the year in 2017. The quartet will be broadcasted on Flo Combat. 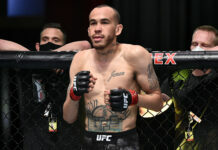 Sean Woodson Plans to Up Aggression vs. Youseff Zalal at UFC Vegas 28