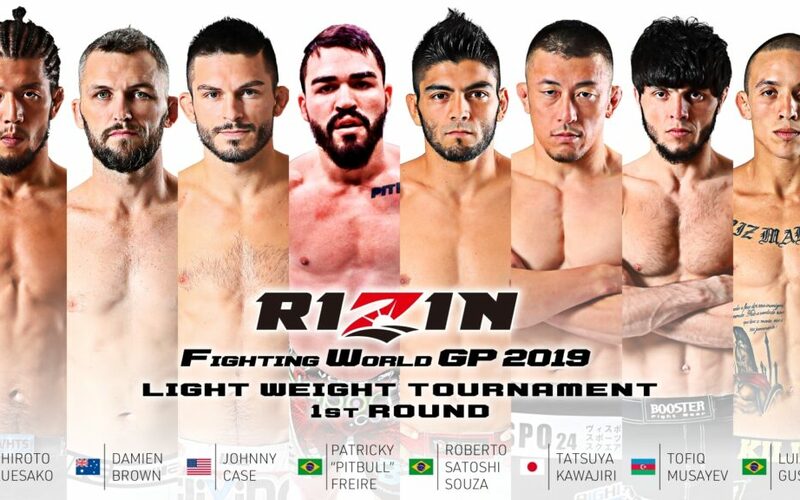 RIZIN FF dropped a boatload of  fight announcements Wednesday for their RIZIN 19 show. Four fights were announced and the participants in the lightweight Grand Prix were named. Brackets are expected to be announced at a later time. RIZIN 19 will take place on October 12 in Osaka at the Edion Arena. 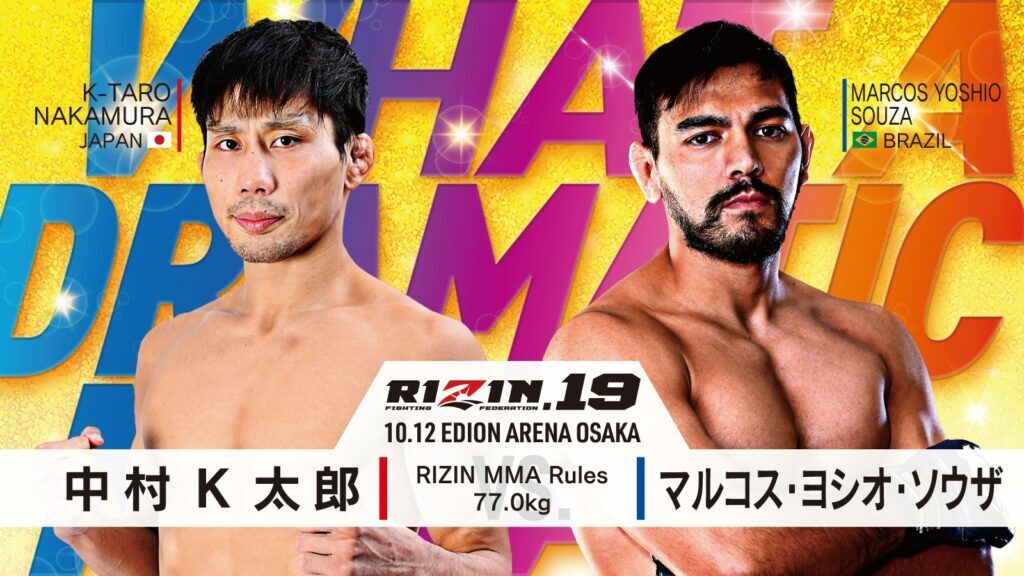 Nakamura had an up and down record while in the UFC. He went 4-4 with his last match being a decision loss to Sultan Aliev.

De Souza is the older brother Roberto “Satoshi” de Souza who is in the lightweight GP. Both live in Japan where they operate a jiu-jitsu academy. The jiu-jitsu black belt has finished all but two of his bouts by submission.

RIZIN has not featured many fights in the welterweight class. This fight could be the start of an opportunity to take the division more seriously.

Keita Nakamura: “I hope to meet Sakakibara’s expectations so that RIZIN can start putting more efforts in the welterweight division.”

Marcos de Souza: “I want to thank RIZIN and Nakamura for making this fight happen. I will train hard every day and will make a good fight. I won’t be looking for a specific finish, I just want to make sure it will be a great fight. Please look forward for my fight.” 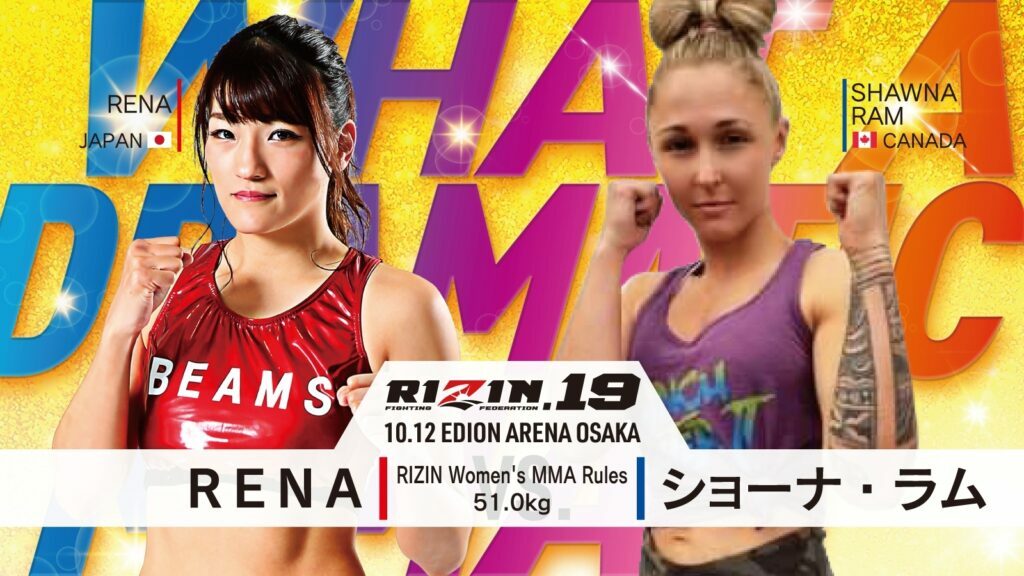 Rena Kubota (aka RENA) (8-3) is a super atomweight Grand Prix finalist, losing in the finals to Kanna Asakura. The shoot boxing champion’s most recent MMA match was her U.S. debut at Bellator 222 in Madison Square Garden. She lost to Lindsey VanZandt by rear-naked choke.

Shawna Ram (1-0) is a fighter from British Columbia, Canada. Her one pro fight was a decision win in October 2018 over RIZIN alum Chelsea LaGrasse. Ram was 4-1 as an amateur.

RENA: “I am sorry to have disappointed you all in New York. I hit rock bottom but I am now back on track and ready to start climbing the ladder once again. I am nothing but
grateful that RIZIN gave me an offer in my hometown Osaka, so I would like to show my
hometown fans an exciting finish.”

Shawna Ram: “I am fighting on RIZIN 19 in Japan against a very very experienced fighter. Myself and RENA both have the skillset to make this a very exciting fight. I am honored to live my dream and fight for RIZIN.” 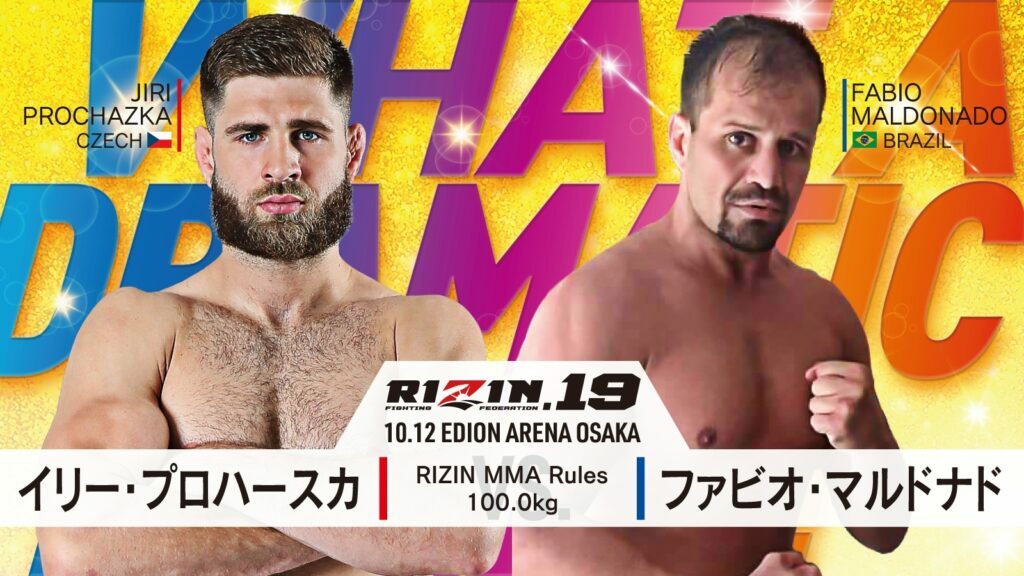 Prochazka has become a RIZIN favorite due to his highlight reel finishes of opponents. He won the championship when he knocked out King Mo at RIZIN 15.

Brazilian Fabio Maldonado competed in the UFC at both light heavyweight and heavyweight. He gained notoriety due to the tremendous amount of punishment he took in his matches. He also competes professionally in boxing. RIZIN 19 will be his debut for the promotion.

Jiri Prochazka: “I’m really happy for this opponent. It’s a real challenge for me. I saw him one time, when he fought with Fedor Emelianenko and he showed a very good and tough fight. He’s a different type of opponent than I’ve ever had, but this is the right challenge for me. I want to win without compromise and to show all Japanese fans that my strategy is on the next level. I’m looking forward to Japan and RIZIN!!”

Fabio Maldonado: “I am very happy to be able to fight in RIZIN. I am sure that the Japanese fans will love my style. Jiri is a very tough opponent and the perfect one for an epic battle.” 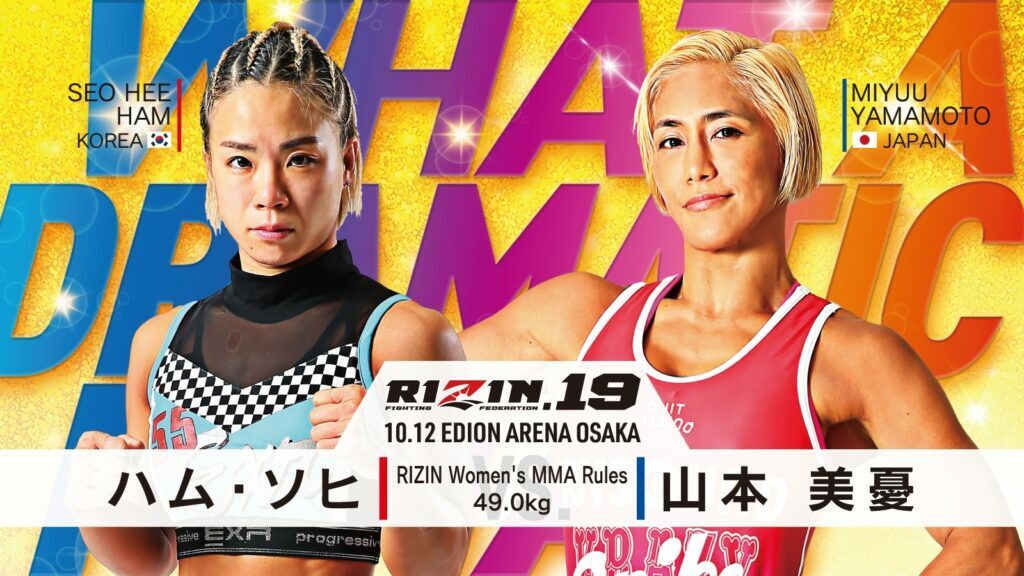 Seo Hee Ham called for a fight against Miyuu Yamamoto and she got her wish. Photo courtesy of RIZIN FF.

South Korea’s Seo Hee Ham (21-8), better known as “Hamderlei” to her devoted fans, is the current ROAD FC atomweight champion. She had her first RIZIN fight at RIZIN 17 where she put down DEEP JEWELS atomweight champion Tomo Maesawa in the first round. After the fight she called out Miyuu Yamamoto (5-3), saying “I want to fight for the RIZIN title, but I’ve got to earn it. I want Miyuu Yamamoto!”

Yamamoto is an expert level freestyle wrestler who has been with RIZIN since 2016. The Krazy Bee team member has utilized her wrestling to get her five wins. The winner of this will likely go on to face atomweight titleholder Ayaka Hamasaki.

Eight fighters were announced for RIZIN’s lightweight Grand Prix. Speculated and talked about for months, RIZIN held several lightweight matches to determine who qualified for the GP. Here is some brief background on each.

Patricky “Pitbull” Freire (21-8): Older brother of Bellator lightweight and featherweight champion Patrício Freire. He will be debuting for the promotion at RIZIN 19. He is on a five-fight win streak and has wins over Benson Henderson, Josh Thomson, and Ryan Couture.

Johnny “Hollywood” Case (26-6-1): A former UFC fighter, he is undefeated in the RIZIN promotion. Both of his RIZIN fights have been ended by a TKO stoppage. In his debut at RIZIN 14, he caused enough damage to the eye of Yusuke Yachi for the doctors to call off the fight. At RIZIN 17, he gave a brutal one-sided beating to Satoru Kitaoka. Kitaoka’s corner threw in the towel in between the first and second round. Case exclusively told MMASucka, “I’m ready to go out and take what’s mine. This is my time, this is my title, no one is going to take from me what I’m willing to die for.”

Luiz “Killer” Gustavo (9-1): The youngest of all the entrants at 23-years-old, it’s fair to say that probably no one expected Gustavo to be in the tournament. Initially a featherweight, he was a late replacement in his RIZIN debut last year. In his debut, he faced off against Yusuke Yachi as a lightweight at RIZIN 12. He shockingly knocked out the Japanese fighter. At RIZIN 15 in April, he lost a decision to Mikuru Asakura.

Tatsuya “Crusher” Kawajiri (37-13-2): The oldest fighter at 41, Kawajiri has a storied career in MMA. He has fought as a welterweight, lightweight, featherweight, and bantamweight. The Japanese fighter is a veteran of PRIDE, Shooto (where he was a lightweight champion), DREAM, and UFC. He is 2-3 in RIZIN, but won his lightweight qualifying match by decision against Ali Abdulkhalikov.

Tofiq Musaev (15-3): The Azerbaijani fighter secured his spot in the GP with a decision win over Daron Cruickshank at RIZIN 16. In his debut at RIZIN 14, he got a win over Nobumitsu Osawa with devastating hammerfists.

Roberto “Satoshi” De Souza (9-0): The only fighter in the GP who is undefeated. Considered one of the best BJJ practitioners in the world, Souza has finished all nine of his fights. His two RIZIN wins have come by knockout.

Damien “Beatdown” Brown (19-12): Hailing from Australia, Brown left the UFC on a losing streak but has now gone back to his winning ways. His first fight in RIZIN was a first-round guillotine choke submission over Daron Cruickshank. In his second fight, he defeated then-undefeated DEEP lightweight champion Koji Takeda by decision. Brown exclusively told MMASucka, “I’m over the moon to have qualified although I felt like I was an obvious choice. I feel like I’ve been brought in to lose mainly due to the late notice. So you best bet I’m going in with something to prove. Expect fireworks.”

Hiroto Uesako (16-7): A former DEEP featherweight champion, Uesako has one sole win in RIZIN. The disciple of Yoshihiro Akiyama and Yushin Okami got a TKO victory over France’s Yves Landu at RIZIN 18.