Is Justin Gaethje Ready For a Title Shot? 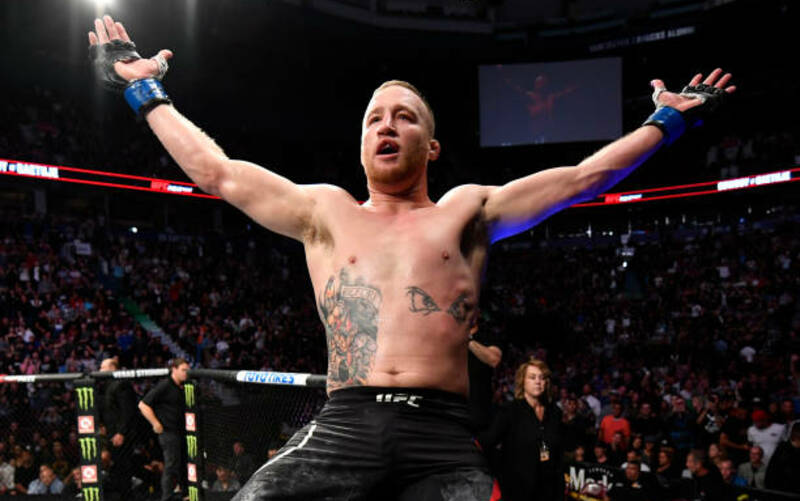 A first-round knockout of Donald Cerrone at UFC Fight Night 158 on Saturday edges Justin Gaethje closer to a title shot, and the Arizona fighter wants the winner of Khabib Nurmagomedov and Tony Ferguson.

Gaethje saw off Cerrone with relative ease in Vancouver. Cowboy looked unsettled by the power and forward pressure of Gaethje, who dropped Cowboy twice before the ref called a stop to the fight near the end of the first round.

A 21st professional win for Gaethje, and a third straight win by first-round stoppage. Now a top 4 contender in the lightweight division, Gaethje wants a shot at the title – namely the winner of the as-yet-unconfirmed Khabib-Tony fight.

Overtaking Cerrone to go fourth in the division, only Conor McGregor and Dustin Poirier stand between Gaethje and the number one contender Tony Ferguson.

In an interview with ESPN last month, McGregor told Ariel Helwani that he was due to fight Justin Gaethje in June this year but for a hand injury. Gaethje later said that he was unaware of this scheduled ‘fight’ with the Irishman, which now seems unlikely to happen.

The next most likely fight for McGregor is Poirier. The pair exchanged tweets after Poirier loss to Khabib at UFC 242 last month, and fans seem keen on a rematch between the two before the end of the year. That clears the way for Gaethje to fight the winner of Khabib-Tony next year, but is Gaethje ready?

It’s been a turbulent two years for Gaethje. Having won at the TUF Finale against Michael Johnson in 2017, he suffered back-to-back defeats against Eddie Alvarez and Poirier before concluding a three-run streak last weekend.

At only 30-years-old, is Gaethje ready for a shot at the title? He was stopped in his two UFC losses but has come back with three exciting and promising wins. But maybe he needs one more stepping stone on his road to being lightweight champ?

A possible match-up could be against the winner of Al Iaquinta and Dan Hooker at UFC 243 this weekend. Fifth-ranked Iaquinta will be expected to beat Hooker, and with similar brawler-mentality to Gaethje it could make for an enthralling contest.

Justin Gaethje is ranked up their with the top lightweight fighters in the world. He still has the fighting world at his feet and could go on to achieve great things in the sport. Realistically, the winner of McGregor’s next bout will have the next shot at the title, which may leave Gaethje needing another win to earn himself that shot.

Freelance sports writer based in Sheffield. I'm passionate about all sports but mainly Football, MMA and Formula 1, having been published in several publications including Give Me Sport, VAVEL and Sky Sports.